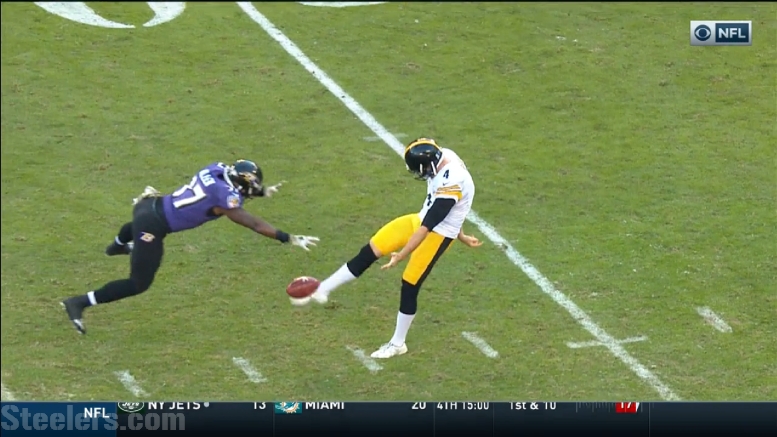 Question: Will there be any fallout from the many miscues and woes on special teams yesterday?

When it comes to the offensive and defensive sides of the ball, the Pittsburgh Steelers have no shortage of errors against the Ravens that greatly contributed to their loss in a 21-14 that was not as close as the final score indicated.

But the special-teams units of Danny Smith were a big contributing factor to all of that as well, in both very obvious, as well as not so obvious ways. For one, the punt coverage unit had a miscommunication in protection that resulted in Jordan Berry’s punt being blocked. Baltimore picked up the loose ball for a scoop and score that made an early fourth-quarter 13-0 lead into a 21-0 one.

Then there was the topper at the end of the game with kicker Chris Boswell attempting to kick the ball with one leg behind the other on an onside try that pretty much went for a whiff. In frustration, he kicked the ball a second time, which, naturally, drew a penalty.

But earlier in the game, the Steelers also had an illegal formation penalty prior to a Ravens 54-yard field goal attempt that made it a 49-yard attempt. And Shamarko Thomas was also flagged for roughing the kicker penalty on a punt. Just before that penalty was a neutral zone infraction penalty, to boot.

To add injury to insult, special teamers Jordan Dangerfield and Darrius Heyward-Bey both suffered injuries during the game, while Roosevelt Nix was a mysterious inactive.

After so many major problems with one unit in one game—even setting aside the fact that the Ravens are indeed one of the better-coached special teams units in the league—one has to wonder if there will be any ramifications stemming from this game, up to and including Smith losing his job.