Happy Friday to all of you once again and welcome to weekend.

The Pittsburgh Steelers will be looking to end their four-game losing streak Sunday on the road against the Cleveland Browns and I can only imagine what will happen if they fail to do so. Losing to an 0-10 team with a rookie quarterback might result in me even looking for a bridge in Las Vegas to jump off.

It’s been a rough season injury-wise for the Steelers and it got even worse this past week when it was announced that defensive end Cameron Heyward will miss the remainder of the year due to a pectoral tear. If there’s one player that they couldn’t afford to lose on the defensive side of the football, it’s him.

Well, next week is Thanksgiving and not that you care, it will be a lonely one for me. This will be the first Thanksgiving that I’ve spent away from my wife in the nearly 30 years that we’ve been together. At least the Steelers play that evening so that will keep me occupied. I sure wish Toby was still around to keep me company.

Enough about me and my sadness.

As usual, I have five questions for you to answer on this Friday night and I hope you will do just that in the comments below.

Have a great weekend and here’s to us all finally being able to talk about a Steelers win again come Sunday evening.

1 – The Browns are allowing 275 yards per game against the pass on average so far this season. Will quarterback Ben Roethlisberger exceed that number on Sunday despite the expected windy conditions?

2 – Outside linebacker Bud Dupree might just make his 2016 debut Sunday against the Browns. Will he ultimately lead the defense in sacks come the end of the regular season? He currently needs 3.5 to accomplish that feat.

3 – How many COMBINED total sacks, turnovers, third down stops and run tackles for loss will the Steelers defense have Sunday against the Browns?

4 – Are you currently fine with the Steelers selection of cornerback Artie Burns this year? If not, name the player you would have picked of the 32 who were selected after Burns and before the Steelers second-round selection. (see table below)

5 – True or false: The Steelers will go on to win the AFC North division this season. 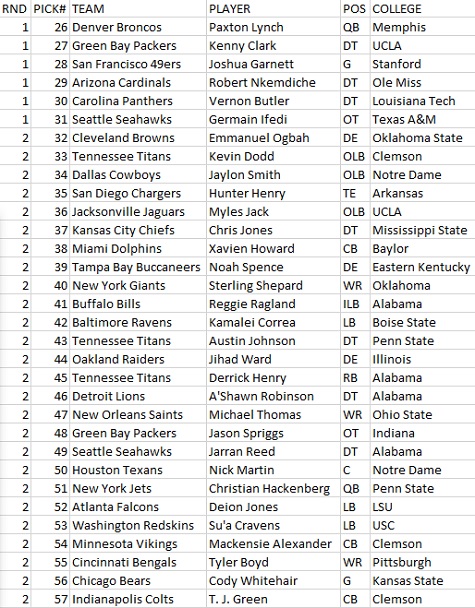