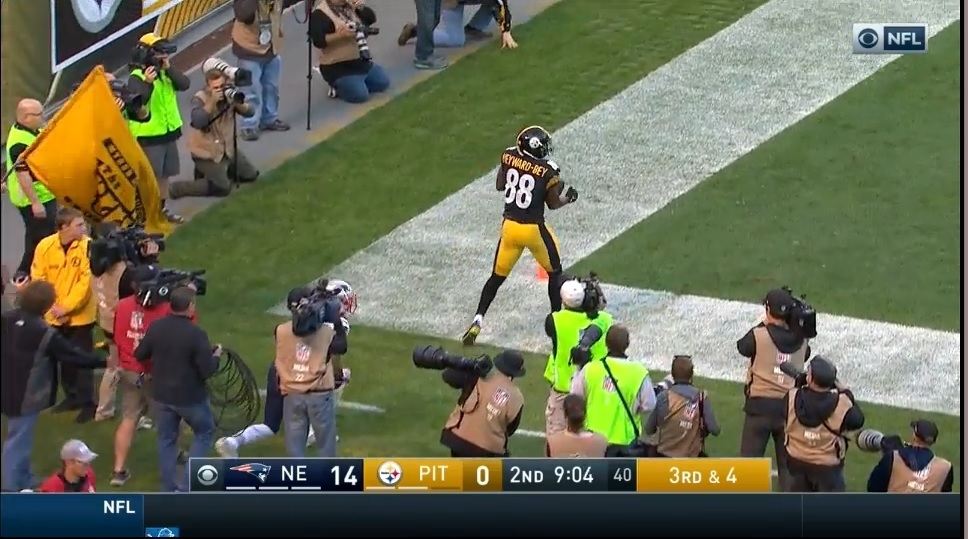 It may have wound up being a closer game than what many envisioned, that won’t bring any comfort to Pittsburgh Steelers’ fans. Numerous failed opportunities dropped the Steelers to the New England Patriots 27-16.

Jarvis Jones forced a fumble on the Patriots’ first offensive play of the game, ripping the ball away from receiver Chris Hogan, to give the Steelers the ball at New England’s 45. But Landry Jones forced a throw to Antonio Brown on third down and was picked off in the end zone by Malcolm Butler.

Tom Brady led a 13 play, 80 yard drive that culminated in a 19 yard touchdown by running back James White, a screen pass where he got good blocking and weaved in and out of traffic to dart to the end zone.

Following a Steelers’ three and out, the Patriots repeated themselves, an 11 play, 84 yard drive. It was capped with a three yard plunge by LeGarrette Blount and put New England up 14-0 early in the second quarter.

It was a moment where it felt like the game was over. But Pittsburgh rallied back, led by Jones and Brown, who connected with a 51 yard completion down the right sideline to the Patriots’ 20. It was Brown’s longest catch since November of last season.

Darrius Heyward-Bey finished it with an impressive toe-tapping grab from 14 yards out to erode the deficit to seven.

After a three and out, Pittsburgh had a chance to get even closer but Chris Boswell suffered a rare miss from 42 yards out – wide right – to keep the score 14-7. He’d tuck his next try inside the right upright shortly before the half to put Pittsburgh down just four at the break. A holding on Chris Hubbard negated another Heyward-Bey that would’ve tied the game.

The Steelers’ defense again continued to tighten the screws, forcing a Patriots’ punt to kick off the second half. But Pittsburgh was unable to finish off another drive, a running them for the day, and had to settle for a Boswell 46 yard boot.

From there, the Patriots would take over for good. Rob Gronkowski, basically invisible for the first half, beat Robert Golden down the seam for a 36 yard touchdown for a 20-13 lead.. Stephen Gostkowski would give Pittsburgh a faint glimmer of hope by missing the extra point.

But Pittsburgh had to end another drive with another field goal while the Patriots kept finding the end zone. A bingo from Boswell made it 20-16 but it was Gronkowski, again, the catalyst for the next touchdown. He again beat Golden for a 37 yard gain down to the Steelers five. Blount would run the ball off the left edge on the next play to go up 27-16, the game’s final score.

Run defense was again an issue. New England ran for 140 yards, 127 from Blount, and averaged just under five yards per pop.

Third downs went to the away team, finishing 7-12 while the Steelers were just 5-16.

Landry Jones had an up-and-down day, going 29/47 for 281 yards, a touchdown and a pick. He leaned heavily on Le’Veon Bell, who caught a career high 10 passes, and carried it another 21 times. He ended the day with 149 yards of total offense.

Antonio Brown, hobbled by a thigh injury in the second half, led the Steelers with seven receptions for 106 yards on 11 targets.

Gronkowski led the Patriots in yards, four catches for 93 yards and a touchdown while Julian Edelman led them with nine receptions, often besting Lawrence Timmons’ underneath.

Pittsburgh is now 1-4 in their last five matchups against New England and have won just twice since 2005.

The Steelers will get their bye this upcoming weekend to rest up before an AFC North showdown with the Baltimore Ravens on November 6th at 1 PM.