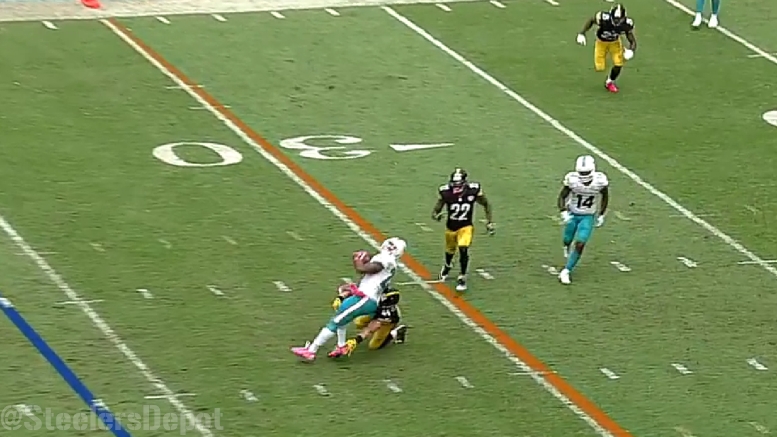 If there is any solace for a certain sliver of the Pittsburgh Steelers’ fan base to be taken out of yesterday’s frustrating loss—exacerbated after the fact when we learned that Ben Roethlisberger would require surgery to repair a torn meniscus—there was, at least, a Dirty Red appearance for the Tyler Matakevich fan club to sink its teeth into.

And even though he played well less than half of the game—I believe it was 18 snaps, or somewhere in that vicinity, perhaps a bit less than that—he still led the Steelers—both teams, in fact—in tackles, racking up eight total tackles in the fourth quarter plus one play, with six of them being of the solo variety and two coming as assists. He also recorded a tackle on special teams to give him nine in total.

Now, racking up the tackle numbers doesn’t necessarily mean that you did a wonderful job, and I wouldn’t say that Matakevich did a wonderful job, though he did not play poorly, either. What it does mean, however, is that he has both a nose for the ball, consistently being around the play, as well as a motor that drives him to make plays he might not otherwise make.

Matakevich checked into the game in order to replace Vince Williams at the end of the third quarter. Williams, how of course was making his third start in a row in placed of the injured Ryan Shazier, appeared to suffer a leg injury on the punt coverage unit—the play on which Matakevich made the tackle—getting helped off the field by trainers, though the team announced that he was dealing with cramping issues.

Matakevich played all or most of the rest of the game from that point on, and made a tackle on nearly half of the plays for which he was in the game. During one stretch of the game, he made seven consecutive tackles, six of them solo, over the span of two drives, the first being the final play of the previous drive, followed by the first six plays of the next drive.

Frankly, I can’t think offhand of the last time that I had seen a player make seven consecutive tackles, although perhaps it is not so far in the past as it might sound. But, of course, if you’re making six tackles on the same drive, that obviously also means that the opposing team is moving the ball.

Perhaps the biggest blemish on his day came on that last tackle that he made, on a third-and-one, on which he tried to stay with the tight end on a scramble drill, but Ryan Tannehill was able to hit him with the linebacker trailing for a 19-yard chain-mover.

Of his eight tackles, three were ‘stops’ including two in the run game, and, most significantly, a tackle after a five-yard checkdown pass on third and six that got the defense off the field. All in all, it wasn’t such a bad time to get Matakevich some snaps, and it wasn’t such a bad performance overall, either.