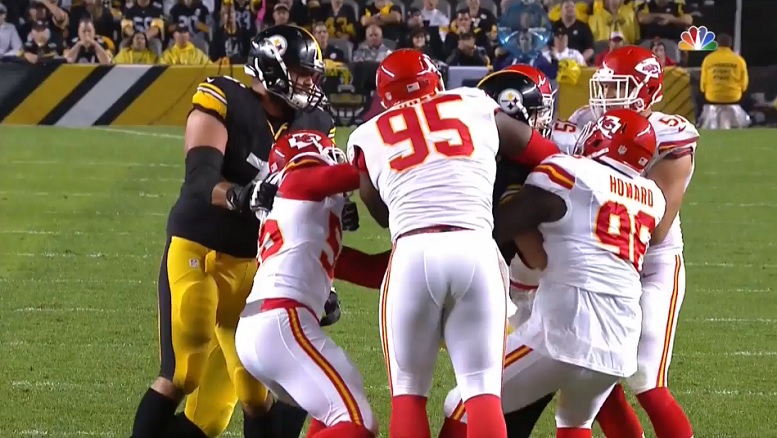 During the Sunday night win over the Kansas City Chiefs, Pittsburgh Steelers quarterback Ben Roethlisberger was gang-sacked early in the second quarter. On the play in question, after he was clearly in the grasp of several Chiefs players while still on his feet, Roethlisberger was then taken to the ground and yet no penalty was called even though several whistles can be heard being blown repeatedly by the officials on the television broadcast.

On Tuesday, Steelers head coach Mike Tomlin was asked about that sack during his weekly press conference.

“I’m sure there was a whistle, I don’t know when it was, but my contention is that it wasn’t timely enough,” said Tomlin.

When timing the sack, you will see that Roethlisberger was clearly in the grasps of a few Chiefs defensive players roughly 4.5 seconds after the football was snapped. He was then taken to the ground roughly another 4.5 seconds later and yet no penalty was called.

Tomlin, as you can see in the animated gif below, was highly irritated that the officials failed to penalize the Chiefs for unnecessary roughness on Roethlisberger and he had every right to be.

It’s long been documented that Roethlisberger doesn’t get the same level of protection that many of the other quarterbacks around the league receive when it comes to unnecessary roughness, late hits, or hits to his head, neck or lower legs and that really needs to change moving forward.

Sure, Roethlisberger is currently one of the best quarterbacks in the league when it comes to shaking off potential sacks but with that said, he had clearly given himself up on the this particular one and the officials should have penalized the Chiefs for taking him to the ground.