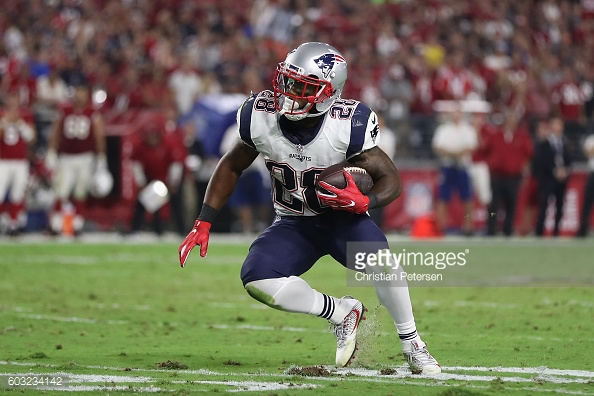 One of the well-known traits of Bill Belichick’s tenure as head coach in New England has been the ability to make otherwise fungible players into key parts of his game plan. In a smaller subgroup are the running backs that he has turned into weapons in the passing game.

From Kevin Faulk of yesteryear to Danny Woodhead, Shane Vereen, Dion Lewis and James White, Belichick has turned his running backs into vital targets. Since Lewis is out for the season with a torn ACL, White has been anointed the next beneficiary of an offense where a running back has caught 40 or more passes in each of the last four seasons. White is already well ahead of that pace with 25 receptions – third-most on the team – in six games so far in 2016.

What makes White so important to this offense is that while his numbers might not look overly imposing, his worth comes in being a reliable option that allows Tom Brady to avoid losses or plays of no gain by picking up yardage in small chunks and helping to keep the chains moving (seven of his catches have come on third down). That very concept was on display during the Patriots’ 35-17 win over the Cincinnati Bengals last week in Foxborough, when Brady found White on consecutive plays during two different drives to help the offense move the ball.

On 1st and 10 in the first quarter, Brady recognizes the Bengals are in man coverage and makes the quick read to find White open out of the background for a seven-yard gain. White’s number is called again two plays later after a six-yard pass to Julian Edelman to pick up a first down.

White takes the first down handoff for seven yards on the outside zone play from “11” personnel (one running back, one tight end, three wide receivers).

In the second quarter, White shows up again as a key contributor on a drive, this time leading to a touchdown during the two-minute drill.

On a first down in their own end of the field, Brady finds White open in the middle of the field matched up with Vontaze Burfict and throws to him for a seven-yard gain. Then on the very next play, Brady finds him again on a quick read out of the backfield with a short pass for a first down.

Two plays later, after a big gain downfield to wide receiver Chris Hogan, Brady reads the linebacker matchup again out of the no-huddle and throws to White in the flat for a 15-yard touchdown pass.

Brady threw another touchdown pass to White in the third quarter on the same exact play against the same exact defensive alignment. It’s probably no surprise that play was called in the red zone both times. The Bengals defense keyed on tight end Rob Gronkowski lined up alone on the right side of the line of scrimmage with the other three receivers split wide to the left side. Gronkowski runs an intermediate route, leaving White open underneath to beat Karlos Dansby again in that same mismatch.

If the Steelers make it a key part of their defensive game plan to limit Gronkowski – namely with Ryan Shazier, their fastest linebacker – they could create the possibility for a big day from White in a role the Patriots have quietly maximized over the past decade.