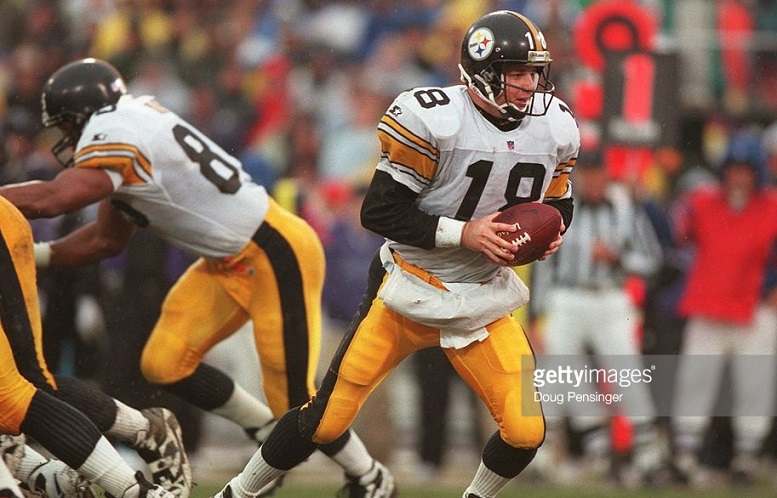 To the viewers eyes at home it is obvious that the 4-3 Pittsburgh Steelers are an inconsistent bunch as the Mike Tomlin-led team has brutally dominated some opponents while looking hopeless against others. With no middle ground between winning big and losing ugly, the Steelers find themselves off to their most inconsistent stretch in 20 years.

Win or lose, all seven games played by the Steelers this season has been decided by more than 7 points, the first time this feat has been accomplished since the 1996 Steelers did it two decades ago. 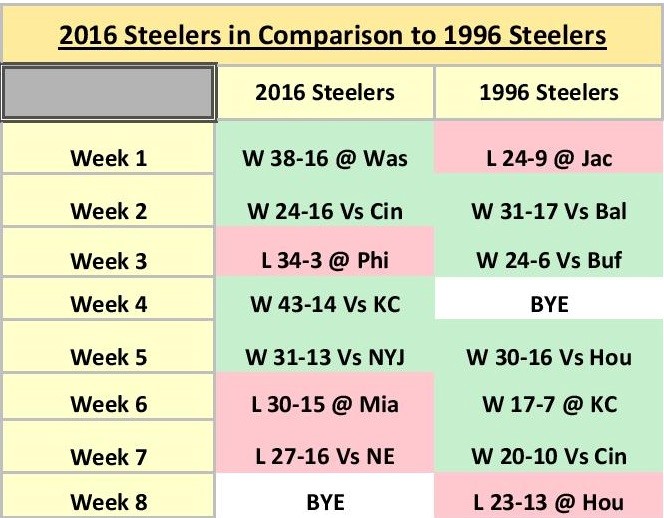 A statistic like this for the Steelers may seem to hold little value when sitting atop the AFC North standings but ultimately it is their AFC North lead that is more deceptive than the stat at hand. The ’96 Steelers may show the collision course the current ’16 team is on due to their similar ‘Go Big or Go Home’ approach.

For starters, both the ’96 and ’16 Steelers have holes in their game plan that led them to numerous ugly losses. The ’96 team relied entirely on their defense holding down the opposition as the lackluster passing offense led by quarterback Mike Tomczak would struggle to keep up. The ’16 team sees a role reversal; featuring a high-power offense that has little margin for error due to a push-over defense. 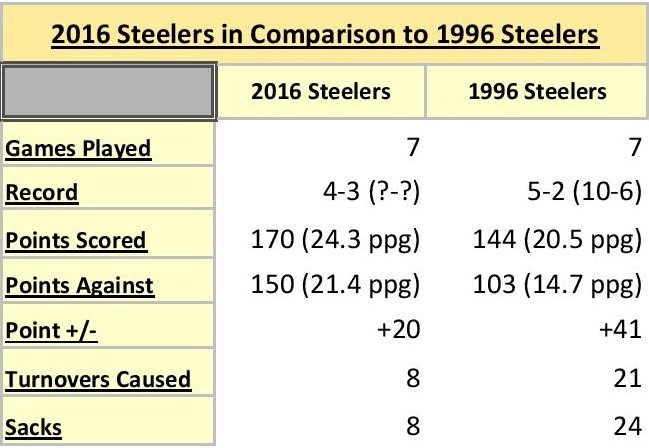 While the ’96 team was able to feast off 24 sacks & 21 turnovers to give Tomczak continuous opportunities to score, the ’16 Steelers squad does not have this luxury.  Their 8 sacks rank last in the NFL while their 8 takeaways are middle of the pack. These totals provide immense pressure for the offense keep pace but under pressure both offenses have shown to crack. The ’96 Steelers finished 0-5 when allowing 20+ points and the ’16 Steelers are 0-3 in the same scenario.

Ultimately, the win big or go home game plan can only withhold for so long. The ’96 Steelers lasted until a divisional round 28-3 loss at the hands of the New England Patriots. How long will the ’16 Steelers last? Well, only time will tell.

With the bye week ahead and numerous key players such as quarterback Ben Roethlisberger and defensive end Cameron Heyward hopefully returning from injury soon, the ’16 Steelers certainly have the tools to dispel any relation to the mirage 1996 team.