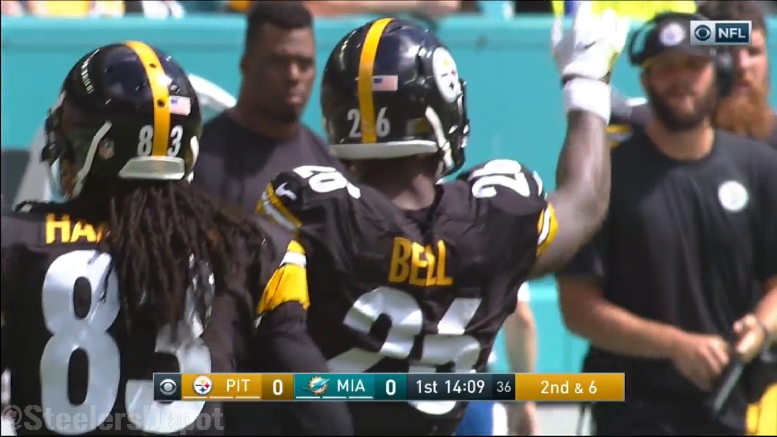 The Pittsburgh Steelers will now move forward without starting quarterback Ben Roethlisberger for an unknown amount of time due to him now needing surgery Monday morning to repair a torn meniscus in his left knee that he suffered during the first half of Sundays loss to the Miami Dolphins. With Roethlisberger out, Landry Jones will now take over as the team’s starter next Sunday at home against the New England Patriots.

While there’s no reason to think that the Steelers can beat the Patriots without Roethlisberger, the game will go on as scheduled. If the Steelers are smart, they’ll lean heavily on getting the football in the hands of their running back Le’Veon Bell startling next at Sunday at Heinz Field.

While the Steelers did lose Sunday to the Dolphins, Bell actually had a decent game as he registered 108 yards from scrimmage on 16 touches. Had he touched the ball more in the game and especially on 3rd and 1 late in the first half, who knows how that game would have eventually turned out. Bell is a damn good pass catcher out of the backfield so he needs to be used as such now more than ever until Roethlisberger returns.

It goes without saying that wide receiver Antonio Brown needs to quickly develop some chemistry with Jones as well this next week in practice. Brown only had 4 receptions for 39 yards in Sunday’s loss to the Dolphins and that marked the third time this season he’s recorded just 4 receptions in a single game. Double coverage and all, Steelers offensive coordinator Todd Haley needs to figure out a way for Jones to get the football in Brown’s hands at least 8 or 9 times against the Patriots.

The Steelers, in essence, need to play keep away from the Patriots on Sunday if they remotely want to have a chance at pulling an upset. Additionally, Jones will need to play the way he did last year when he relieved an injured Mike Vick in the Steelers win over the Arizona Cardinals.

The Steelers defense will also certainly need to come ready to play next week after being embarrassed Sunday by a Dolphins offense that had struggled in their first five games. Not only did they make Dolphins running back Jay Ajayi look like Barry Sanders on Sunday, they also made quarterback Ryan Tannehill look like Tom Brady. In the four games that they have won so far this season, the Steelers defense has held the opposing offense to 16 or less points. If they can hold Brady and the Patriots to 20 or less points, the team will have a small shot at winning the game as long as long as their offense can finish a few drives with touchdowns and not turn the football over. Bell needs to be a big part of the game plan.

It’s a tall task for Jones and the defense and while it’s fine to think they have no chance of winning Sunday against the Patriots, nobody thought the team would beat the Cardinals last season when Jones took over at quarterback.