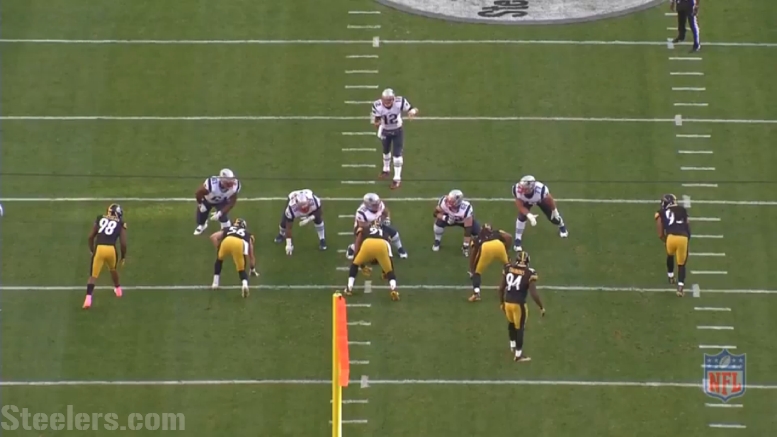 For the first time this season—actually, for the first time in his career—Pittsburgh Steelers second-year outside linebacker Anthony Chickillo took the majority of the team’s snaps on the defensive side of the ball in their last game, a defeat at the hands of the Patriots. The former sixth-round draft pick was rotated into the starting lineup the week prior against the Dolphins.

With fellow second-year outside linebacker, first-round draft pick Bud Dupree, being placed on injured reserve, Chickillo has taken on a far larger role in 2016 than he had as a rookie. Of course, he also spent the first few weeks of the 2015 season on the practice squad. He saw time on defense in just one game last year, logging a little over 20 snaps, but failing to record a statistic.

Last week, he easily eclipsed that mark, logging 35 snaps, and that snap total is impressive when you consider that the Patriots only ran 58 plays, including penalty snaps. Arthur Moats, who began the season as the starting left outside linebacker, saw only 23 snaps over the span of the contest.

Still, it was a fairly quiet evening for Chickillo against the Patriots as well. He registered just one tackle, an assist, which came on a quarterback scramble that drew a holding penalty on a second and 20 play, but the penalty was declined in order to put New England in a situation in which they had to pick up 17 yards on third down.

By Alex Kozora’s tracking, Chickillo yielded one quarterback pressure during the game on roughly 20 pass rush attempt. Unfortunately, that one pressure came on a 37-yard completed pass. He only dropped into coverage a small handful of times during the game.

As Alex also noted, he lined up several times throughout the game, actually, with his hand on the ground, as a defensive end. I’m sure that you recall the former Miami Hurricane was a defensive end during the course of his college career.

All of those snaps came with the Steelers in their base nickel defense, aligned as the left defensive end with three total defensive players with their hand on the ground. On a couple of those instances, they brought an inside linebacker out to the edge.

Chickillo’s debut as a starter the week before against the Dolphins was a bit more successful overall, though he did play a smaller percentage of the team’s total defensive snaps. He registered three tackles, although we did not mark him down as generating any pressures over the course of the game. The week before that, of course, he recorded his first career sack, and defensive fumble.

To be perfectly honestly, I’m still not sure why the Steelers chose to snap places with Moats and Chickillo, although it ultimately doesn’t matter given the way that they rotate. Moats played more snaps than Dupree after the latter was moved into the starting position. It will be interesting to see how they handle this situation going forward, and if he will continue to see time when Dupree returns.