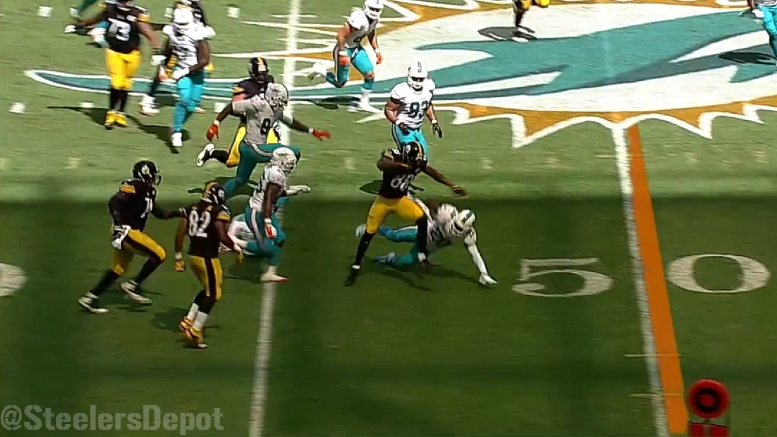 All throughout the course of the offseason, the Pittsburgh Steelers made it clear that the wide receiver end-arounds and reverses were going to be a part of their offense, something that they would run a couple of times a game. Of course, this was not unique to 2016, but they do seem to be doing it more, and are having to find more ways to do it without Martavis Bryant.

While they had been having moderate success using these elongated runs, it had often seemed as though they were coming close from breaking one, but were just missing one last piece or two to really bust the play open.

As it turned out, we learned on Sunday that all that was needed was a shoulder charge from Darrius Heyward-Bey, who authored the team’s longest run of the season with a 60-yard dash in which he put his shoulder into a defender looping around the right edge before using his elite speed to get into the end zone from distance.

The Steelers also ran an end-around with Antonio Brown that game on Sunday, on which they were able to pick up six yards. It was his first carry of the season. The Steelers have also used Sammie Coates on end around twice so far this year, one time picking up six yards, although the second opportunity was snuffed out and he ended up losing a yard on the play.

Were it not for all of the injuries at the wide receiver positions that they have been dealing with, I might expect that the Steelers would actually like to take advantage of these end arounds a bit more frequently than they have been able to thus far over the course of the regular season, having done so just four times through the first six game, twice on Sunday.

It was a more prominent part of their offense during the preseason, which, granted, of course, is offensive play calling of a very different nature and certainly not a one-for-one comparison, but they did use the end-around seven times over the course of their four preseason games.

Coates, of course, got his touches, carrying the ball three times himself. He gained only a total of nine yards on those plays, with a long of nine yards, but he also fumbled the ball on one opportunity, which you might recall drew a lot of attention.

Practice squad wide receiver and rookie seventh-round draft pick Demarcus Ayers had three runs himself, actually gaining 32 yards, with a long run of 15 yards, and Eli Rogers also had one carry for himself, on which he gained five yards.

Considering the fact that they may need to get creative on Sunday due to injuries, I would not be surprised to see the Steelers run an end-around with practice squad call-up Cobi Hamilton, who came away with two catches and a touchdown on Sunday. While he did not have a carry in the preseason, he has the traits that you would look for on such a play.