Looking at the unsung heroes, the offensive line, to our X-Factor of the week Sunday night against the Kansas City Chiefs. And it’s B.J. Finney, who has a tall task this week against a tough front.

This is, of course, assuming Finney will be available. He injured his ring finger during Thursday’s practice but returned in full Friday, making his first career start likely. So let’s assume he plays. His first start will be a rude welcome against the Chiefs’ trio of Jaye Howard, Dontari Poe, and Allen Bailey. He’s poised to see Bailey the most, who doesn’t have much on the state sheet this year, but at least 4.5 sacks the last two seasons and to me, is still their most talented linemen behind Poe.

The Chiefs, like so many teams are doing these days, have a strong rotation and assembly line of able bodies behind them including rookie Chris Jones, a nearly 6’6 310 second round man-child out of Mississippi State. The sacks aren’t there for this defensive line, they’ve yet to record one this year, but the talent very much exists and there’s been plenty of pressure.

But before Finney can worry about anything else, he has to worry about himself. Playing clean, playing assignment sound, knowing and executing his zone block rules and pass protection obligations. All while presumably playing at least a tick below full health.

Back to the Chiefs’ defense. Bob Sutton has a well coached group that does some different things than most teams. There’s a lot of fronts and alignments to deal with, base 3-4, 2-4-5, and even some 3-3-5 (this is where you ask for this in the comments section, I know you will). And then there’s the alignments within that with some very Steelers-like shifts and some unique wrinkles. Namely, their bear front that will place the nose tackle head up and an end on his outside shoulder.

We’ll re-post what we wrote in our scouting report on their defense. 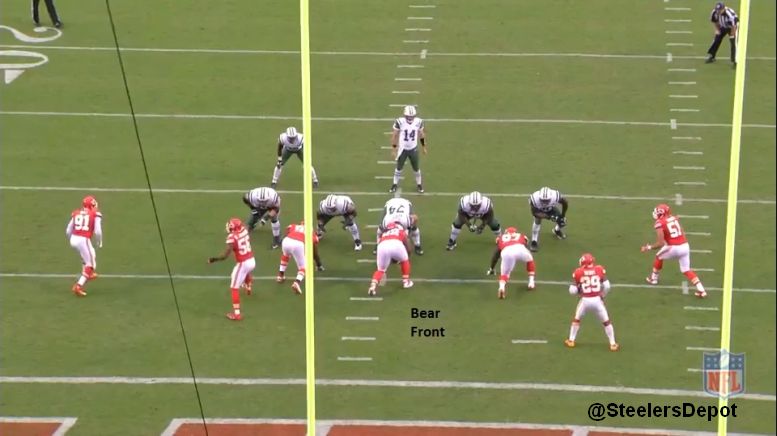 That Bear front is a lot less common in the NFL (though used, Seattle is another team who comes to mind) and seen more often in college football (Virginia Tech uses it heavily). So that’ll be an adjustment to worry about on top of the basic stuff a linemen making his first career start has to handle with.

Finney did seem to play reasonably well in relief on Ramon Foster against the Eagles and he has the benefit of playing at home but considering how rock solid Foster has been, and don’t kid yourself, he has, it’s huge shoes for Finney to fill in primetime action.