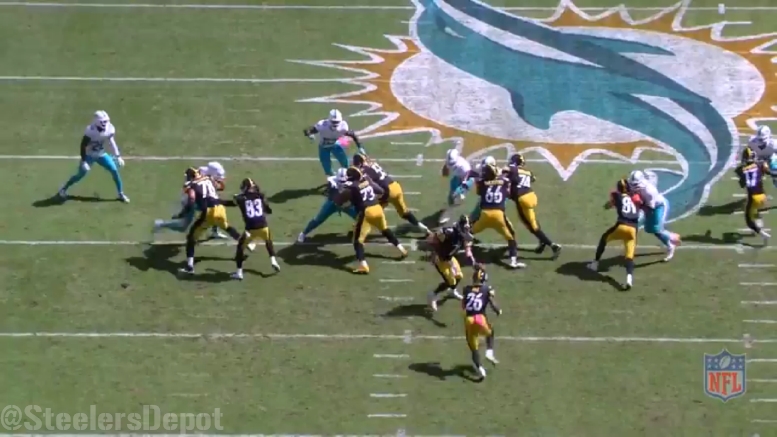 There hasn’t been a lot of good news swirling around the UPMC Rooney Sports Complex over the course of the last two weeks, as the Pittsburgh Steelers’ season has gotten off the tracks a bit over that span of time following consecutive losses by double digits and the knee injury suffered by quarterback Ben Roethlisberger.

The year has, in fact, been plagued with injury misfortunes, including one that has been playing out along the offensive line over the course of the past three weeks. Right tackle Marcus Gilbert already went into the season with a shoulder injury that may require surgery after the season, but he has missed the past three games as a result of a mid-foot injury.

While he told reporters yesterday that he does expect to return to the lineup in two weeks when the Steelers resume their regular season schedule against the Ravens, the reality may honestly be that the offense has not really taken that much of a step back without him in the lineup—or at least not as big of a step back as was anticipated.

What this three-game period has provided us with was an opportunity to get a good, hard look at third-year offensive lineman Chris Hubbard, who like Kelvin Beachum was an undersized tackle in college who was pushed inside at the professional level until he was needed back on the perimeter.

Of course, that is where the reasonable comparisons between Beachum and Hubbard end, but I would imagine that virtually everybody who has followed his career up to this point has been surprised by how well he has shown over the course of the last three games, including not surrendering any sacks, which, in comparison to his preseason work at tackle, is not an insignificant point of order.

This is not to say by any means that Hubbard has shown himself to be a starting quality NFL right tackle, but considering where the Steelers are and where they thought they would be at the offensive tackle position—let’s not forget that both Ryan Harris, their free agent signing, and Jerald Hawkins, their fourth-round draft pick, are on injured reserve—I would say that the level of play that they have been able to get from the position without their top three options is actually somewhat remarkable.

While he did have a couple of penalties on Sunday, including a big holding call that nullified a touchdown—admittedly, that call may have been ticky-tacky at best—I’ve found in my initial impressions that Hubbard turned in another solid effort three weeks in a row now.

To find that you have at least a replacement-level player in Hubbard is a pretty nice side effect of having your starting right tackle sidelined for the past three games. granted, they did lose two of those games, but it certainly wasn’t because Gilbert was missing.