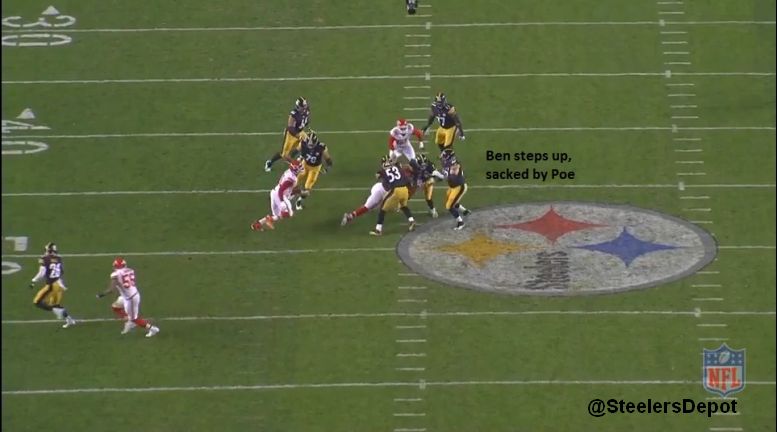 A pair of them to go over with you this week.

1. 3rd and 20, 9:42 1st. 11 personnel. Five block + TE chip/release versus a three man rush. Obviously, disappointing to have a sack – and a pretty quick one at that – happen on a three man rush that forced a Steelers’ punt.

Dontari Poe gets the sack here working on Maurkice Pouncey but that isn’t the root cause of the problem. The issue stems on the left side between Jesse James and Alejandro Villanueva.

Simply, Tamba Hali is able to win the edge, force Ben Roethlisberger to climb the pocket, and get grabbed onto by Poe and soon after, Hali.

It is easy to just say Villanueva got beat but I don’t understand what James is doing here. And this isn’t the first time there’s been an issue with James chipping to Villanueva’s side.

James stays in for a brief moment and you’d think he would help chip or seal Hali, lined up wide and on the tight end’s outside shoulder. 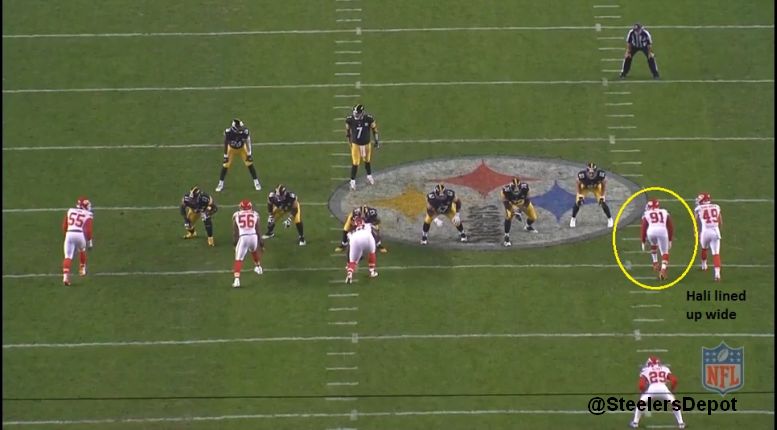 But off the snap, James doesn’t get any width, isn’t very aggressive, and frankly, just seems unsure of what he should do.

Villanueva and James end up on the same plane and it totally throws everything off. Villanueva was expecting Hali to be sealed upfield by James, forced to take a wider path, and when that doesn’t happen, Villanueva hasn’t gotten nearly enough width to defend the edge because again, Hali is lined up so wide (like a wide nine tech, basically). 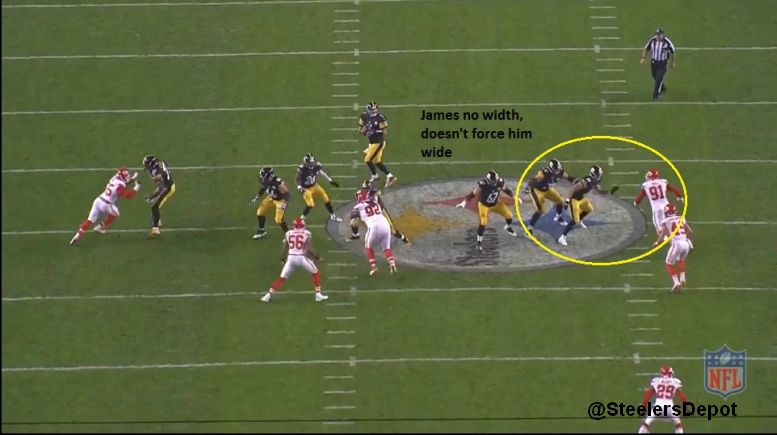 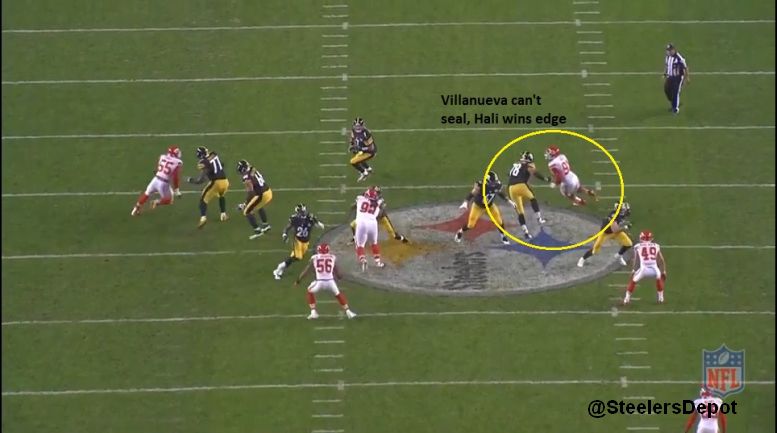 He’s forced to abandon his kickslide and try to open his hips and shove him upfield but it’s too late and Hali corners to pressure Ben. He’s forced to step up and into Poe’s grasp.

I didn’t even notice it until after I had finished typing this but you can see Villanueva visibly upset with James after the play. And that’s rare for his personality. 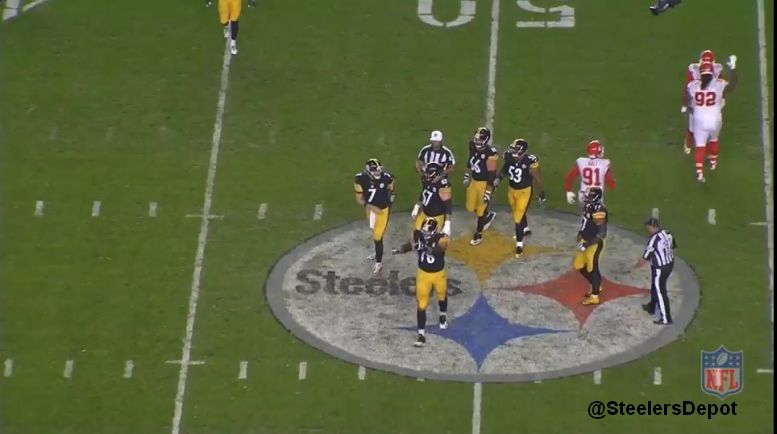 Remember, there was arguably some issue by mistake by James a couple weeks ago when he did a poor job of controlling the backside gap and never wound up giving any help to Villanueva. So the blame, this time, goes on James, because this should’ve never happened.

2. 2nd and 6, 13:43 2nd. 12 personnel. Seven block versus a five man rush. Another disappointing occurrence because the Steelers had two more blockers than the Chiefs had rushers.

This time, Villanueva is more at fault. Dee Ford gets a good punch on him and knocks his arms down, bringing Villanueva’s body weight forward and then beating him around the edge. 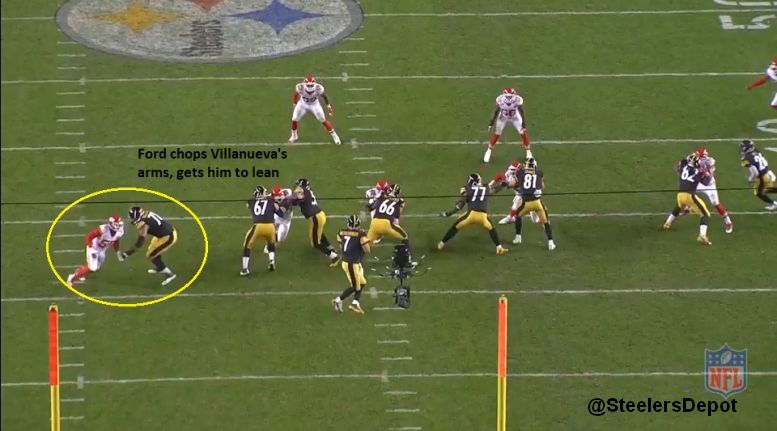 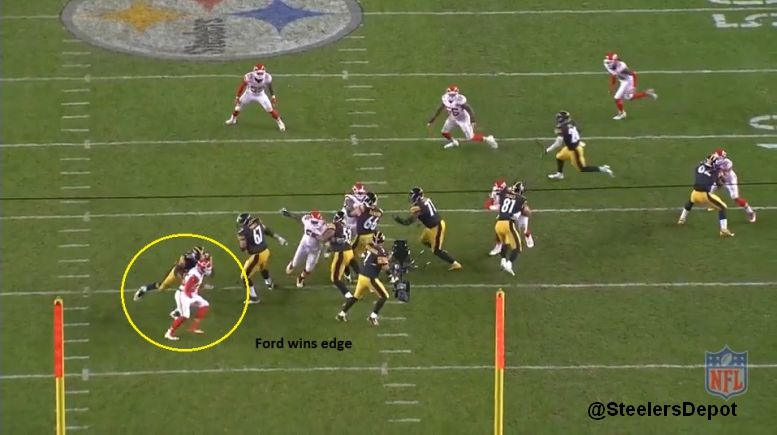 Dontari Poe also has a nice bull rush slanting into Maurkice Pouncey and also flushing Roethlisberger to his right though that’s tough to defend and Pouncey doesn’t do a terrible job here.

There was nothing open downfield, if you were wondering. Just a three man route with the Chiefs able to drop six and take everything away. 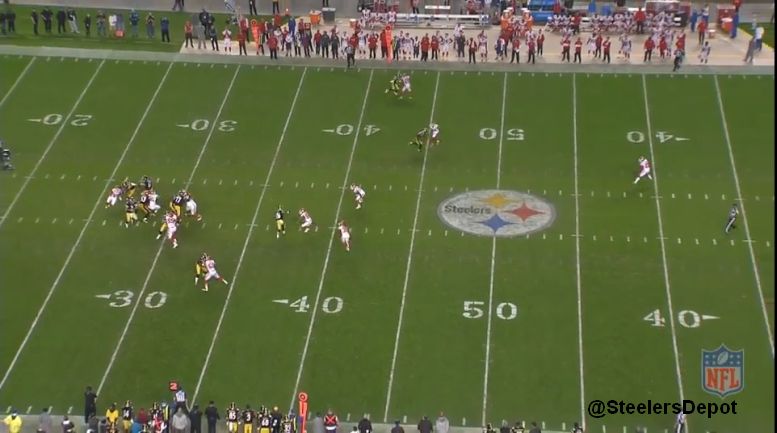 So going to give the blame to Villanueva here.