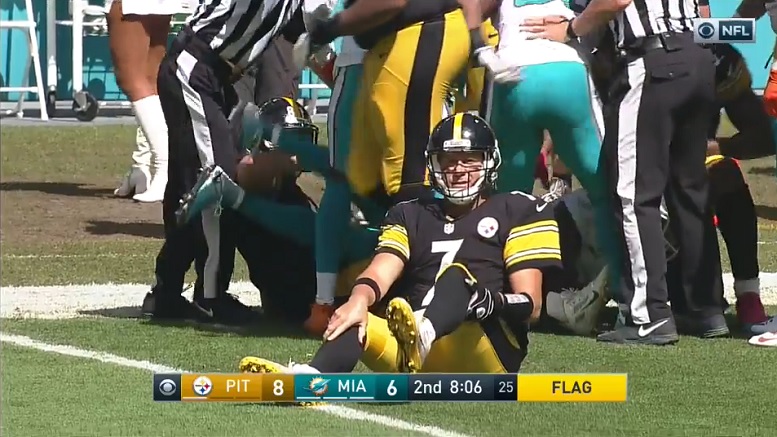 On Monday, Pittsburgh Steelers quarterback Ben Roethlisberger had minor surgery to repair the meniscus in his left knee and while head coach Mike Tomlin wouldn’t put a timetable on his possible return, many have speculated that he might make it back for the game against the Baltimore Ravens following the team’s bye week. That, however, is not guaranteed to happen, according to Roethlisberger.

“Doc says my knee looked good, but there still was some stuff in there from when I had my bone bruise last season in St. Louis. He said that might keep me out a little longer than just a simple meniscus tear,” Roethlisberger told Ron Cook of the Pittsburgh Post-Gazette. “Maybe an extra week or so. But there’s no way to put an exact timetable on it. It all depends on my pain and how I feel. I’m icing and elevating as we speak.”

Roethlisberger is currently resting at home and hopes Tomlin will let him stand on the sideline this Sunday for the Steelers home game against the New England Patriots. Last season, Roethlisberger missed four games after suffering a left knee injury and he’s never missed more than 4 games in a single season so far during his career.

Knowing Roethlisberger, he will be back in time for the game against the Ravens. We’ll have to wait and see as the only thing that we know for sure right now is that he won’t play Sunday against the Patriots.

THIS JUST IN: Steelers QB Ben Roethlisberger could be out 4-6 weeks after undergoing knee surgery to repair meniscus. (via @mortreport) pic.twitter.com/V5LBPC61ve