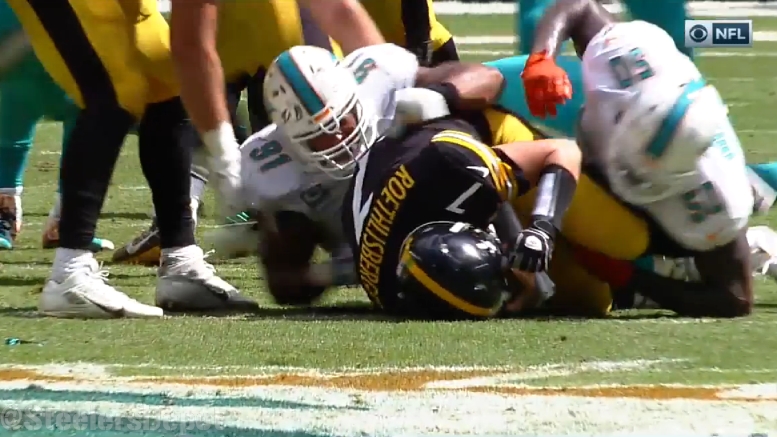 Don’t look too closely, lest you catch whatever Lawrence Timmons had all over the field yesterday afternoon, but the Pittsburgh Steelers’ numbers on third down in Miami were pretty dreadful. And this was a team that was coming into the game as just about the best at converting on third down in the league.

Over the course of the first five weeks, Pittsburgh successfully converted on 31 of their 63 opportunities on third down, which was just a hair under 50 percent of the time. The only team that had been more successfully during that time span was the Cowboys, who converted on 31 of 62 opportunities—the same number of conversions on one fewer opportunity, for an exactly 50 percent success rate.

The Steelers barely got to half of that yesterday, only manage to successfully convert on three of their 11 third-down opportunities, which translates to a success rate of just 27 percent. Technically, they had four, as I will explain next. And unfortunately for the defense, they allowed the Dolphins to convert on seven of their 14 opportunities, which helped them to keep several scoring drives going, while the Steelers did just the opposite.

And one of those third-down conversions, the first one that they managed to convert, only occurred via a lucky break, as on third and 10 on their second possession, Ben Roethlisberger was sacked—only the defender who brought him down was flagged for unnecessary roughness, producing an automatic first down.

Actually, a player in the secondary was also flagged for holding on that same play, which also would have resulted in an automatic first down, but either way, the point is that only three of their successful conversions actually came courtesy of the offense moving the ball.

The Steelers’ first drive died on their own 38-yard line when Roethlisberger was put under pressure on third and six. A hold would have negated any positive play in that instance anyway. They converted a third-and-one two drives later, but then Roethlisberger was sacked on third and 10 from Miami’s 29-yard line, knocking them out of field goal range.

On the final possession of the half, with Landry Jones in the game, the offense passed up what would have been a fourth consecutive run on third and one, but the quarterback was put under pressure and threw the ball away, with a defender getting a hand on it.

Roethlisberger found a target on third and nine to start their first drive of the third quarter, but his next third-down pass was his second interception of the game on third and 12 from the Steelers’ 45-yard line. The offense went three and out on their next two drives, with both third-down passes being defended.

Roethlisberger completed the lone third-down situation the Steelers faced on their penultimate drive, which led to a touchdown, while Miami was playing in a prevent defense. The final drive ended with three incompletions in a row. The offense obviously needs to execute more efficiently to keep drives alive, which explains why they did not get into the red zone even once the entire game.