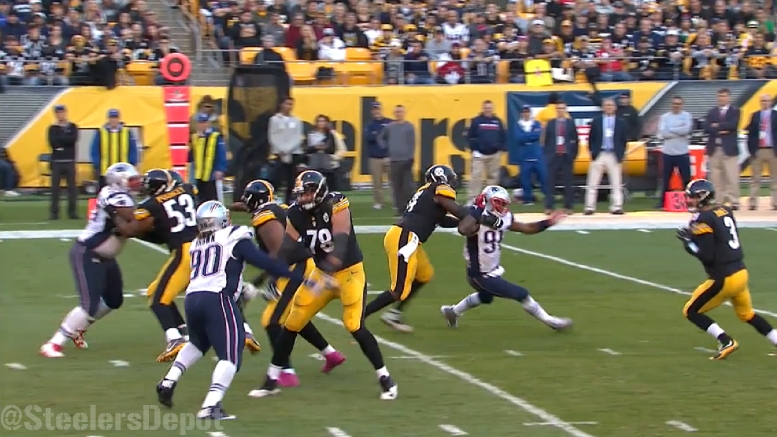 When it comes to performing the autopsy on a loss such as this, the coroner already knows going in that he is going to find that there were multiple causes of death, and that was certainly the case for the Pittsburgh Steelers yesterday. While it may not have been the biggest contributing factor in the outcome, however, the Steelers’ 10 accepted penalties against them certain had an impact in how the game played out.

Even the first penalty was significant, coming just after the defense forced a turnover, and the offense got off a 25-yard passing play to set themselves up with first and 10 on the 20-yard line. Following that explosive play, third-string right tackle Chris Hubbard was flagged for a false start.

The offense gained nine yards on the next two plays, but instead of having third and one, which would have given them options of what to run, they had a third and six, and though Landry Jones did have another option on the third-down play in which he threw an interception in the end zone, the first-down penalty still had repercussions for how the drive ultimately ended.

The Steelers’ next drive was sabotaged early on as well, when on second and eight, wide receiver Darrius Heyward-Bey was flagged for offensive pass interference and a 10-yard loss. When you are playing with an undermanned unit, you cannot afford these self-inflicted wounds.

Speaking of which, cornerback Artie Burns was called for unnecessary roughness on the next drive, which following a 13-yard reception moved New England from the Steelers’ 42-yard line to the 27 on a drive on which they would score a touchdown.

The biggest penalty of all came a couple of possessions later, after Pittsburgh was able to get one touchdown back. It looked as though the Steelers had scored another and tied the game at 14, but Hubbard was flagged for holding on the 14-yard touchdown to Heyward-Bey. Instead of seven points, it was suddenly third and 13. An incomplete pass and a missed 42-yard field goal completed a seven-point swing.

Although they ultimately netted a field goal out of it, there was a drive late in the third quarter and into the fourth on which the Steelers were flagged for two false starts, and then an illegal formation penalty, though the latter was declined.

Trailing 27-16 with just under seven minutes left, the Steelers got things started with a six-yard run, but Maurkice Pouncey was flagged for a hold, making it first and 20 instead of second and four. Jones threw incomplete on two of the following three passes, with a seven-yard incompletion in between, forcing the offense to punt on fourth and 13, down 11, with five and a half minutes to play.

As you can see from the examples that I detailed above, a lot of key moments in this game were shaped by penalties, one of which directly led to a seven-point swing and changed the dynamic of the game. While this is partly what happens when you are playing with understudies, the team simply needs to be more disciplined.