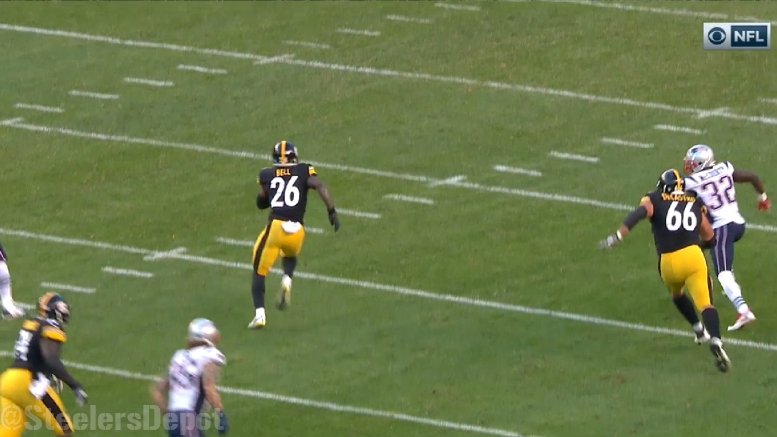 I think it is safe to say that the Pittsburgh Steelers had an offensive game plan in mind to make heavy use of running back Le’Veon Bell, doing so knowing that they would be able to use him in a significant way regardless of whether they were consistently running the ball or were forced to throw frequently.

Following a game in which he got just 16 total touches on 10 carries and six receptions—still going for over 100 all-purpose yards in the limited work—the fourth-year running back recorded 31 touches today, nearly double the number of touches that he was given the week before.

Bell ran the ball 21 times during the game, going for 81 yards. Though the yards per carry figure is not as robust as would have been hoped, watching him run would have made it obvious just how much he was getting done largely on his own, creating his own lanes and struggling ahead for extra yardage where there appeared to be little or nothing to gain.

He also added 10 receptions, which is the most that he has had this season, and, if I’m not mistaken, represents a new career-high in terms of receptions in a single game. Still, he was only able to gain 68 yards on those 10 receptions, averaging a bit under seven yards per catch, as a lot of that had to do with the fact that he took a number of check downs, at least one of which should have gone for a loss, but which he turned into a short gain.

For the second straight week, and, frankly, for what is often the case, Bell was once again clearly the best player on the field for the Steelers on either side of the ball, proving time and again that when he is healthy and on the field, the offense almost has to run through him in order for them to be successful.

Bell’s biggest reception came late in the first half, during the two-minute drill, when Landry Jones was able to hit him with a short pass to the right, but with the space to run through the middle, splitting two defenders for a 22-yard gain. It was his first explosive passing play of the season, and surprisingly just his second explosive play overall over the course of the four games in which he has played.

Jones even targeted Bell deep on one play late in the game, the first play of the fourth quarter, on a shot into the end zone from 26 yards out. I believe it was the first deep target for Bell over the course of the season.

On the year, he has put together 344 yards on the ground on just 69 rushes, averaging five yards carry, but he also has 245 receiving yards on 30 receptions, averaging about 8.2 yards per reception. In all, he has 589 all-purpose yards on 99 touches, averaging just under six yards per touch, and just a bit under 150 yards per game.