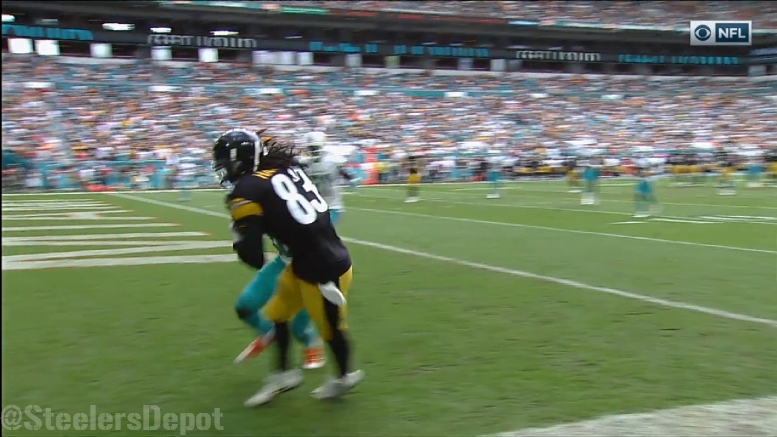 We may likely learn more about their statuses today, but with the injuries that the Pittsburgh Steelers are dealing with at the wide receiver position with Markus Wheaton and Sammie Coates, it may be that we see first-year wide receiver, and recent practice squad call-up, Cobi Hamilton get more involved with the offense on Sunday, and perhaps beyond.

Although he technically started the game on Sunday, since he was on the field for the opening snap, the reality is that Hamilton did not play much in the game, with the bulk of his time coming on that last meaningful Steelers drive in which they were able to make it a one-possession game.

The offense was able to rattle off a long drive, their only real solid drive of the whole game, and it spanned 97 yards. Ben Roethlisberger found Hamilton for 13 yards on the opening play of the drive to get them away from their own end zone, and then found him again on the final play of the drive, in the left corner of the end zone for a 23-yard touchdown.

Prior to that last drive, however, he was pretty much a spectator, although he did also contribute four snaps on special teams, managing to record a downed punt on one of those four snaps. He played just 12 snaps on offense overall, out of 55 total plays.

Even Sammie Coates ended up playing more snaps, and he was clearly limited throughout the game due to the hand injury that he suffered the week before in what was his strongest statistical output of his career, with his first two touchdowns and his first 100-yard game.

If Coates is not going to be able to be a quality contributor right now and the Steelers need to give him time for his hand to heal, and if Wheaton remains out with a shoulder injury, then Hamilton becomes the team’s fourth option behind Antonio Brown, Eli Rogers, and Darrius Heyward-Bey.

The Steelers like to mix Heyward-Bey in, but Rogers has his place in the slot, and Brown, of course, is Brown, and is basically always on the field for every play, except sometimes in the victory formation or the rare odd personnel package.

If things play out poorly on the injury front for Coates and Wheaton, then we will likely see the Steelers work out a rotation between Heyward-Bey and Hamilton at one outside spot, with Brown on the other and Rogers in the slot.

And if he actually performs well, then it would stand to reason that he may keep getting opportunities, at least until the roster gets healed up. Obviously, Coates and Heyward-Bey are not going anywhere, and I don’t see Wheaton getting benched just yet, unless his shoulder is a real problem.

Of course, without Roethlisberger on Sunday, it will be tough sledding for all of the wide receivers, although the reality is that Hamilton has probably worked with Landry Jones more than anyone else as a practice squad player.