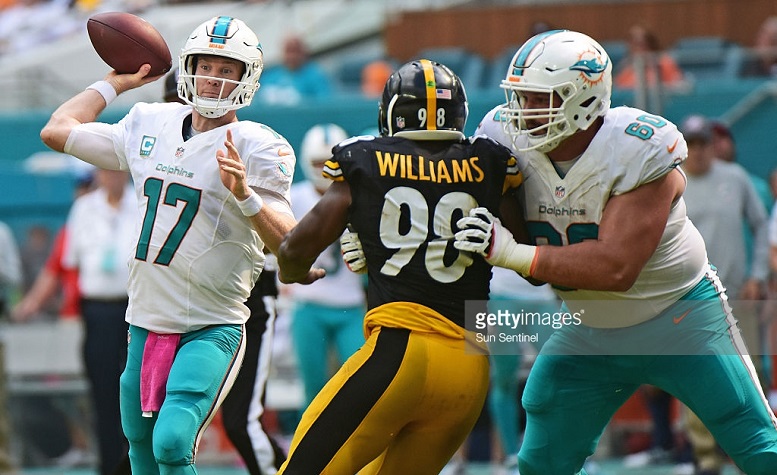 The Miami Dolphins took to the Pittsburgh Steelers on Sunday and not only did their offense have a big day running the football, quarterback Ryan Tannehill complemented it it by completing 24 of his 32 pass attempts in the game for 252 yards.

While Tannehill only attempted 3 deep passes against the Steelers defense on Sunday, he connected on 2 of them for gains of 44 or 38 yards and both resulted in the Dolphins offense being set up inside the Steelers 5-yard-line. I have already broken down those two plays for you here in case you missed it.

For the game, Tannehill’s average a snap to throw time was 2.38 seconds. That’s getting rid of the football fairly quick. If you remove his three deep throw times, his average release time on his other 30 pass attempts was 2.19 seconds and it’s really hard to get a sacks when the football is coming out that quick on average.

Tannehill was pressured on just 2-of-32 (6%) official dropbacks Sunday by the Steelers defense and that was the lowest pressure percentage of his career, according to ESPN and that matches our charting numbers as well.

After throwing incomplete on his first two third down attempts, Tannehill completed his final 9 and 5 of those wound up moving the chains. For the game, the Dolphins converted 50% of their 3rd downs and that was a real killer.

The Steelers need to start defensing these short quick throws much better moving forward and that might mean playing less cover-3 on early downs.

Sunday at Heinz Field, the Steelers will play the New England Patriots and their quarterback Tom Brady will welcome the opportunity to papercut the Pittsburgh defense to death just as Tannehill did this past Sunday. We’ve seen him do it several times in the past as the Patriots love running those rub routes with their wide receivers and tight ends in addition to using quick slants and out throws against zone coverages.

The best chance the Steelers have of holding the Patriots offense under 20 points will likely include them daring Brady to beat them deep and to do that he’ll need to stand in the pocket a little longer. If and when they blitz, they better make sure they get home. Oh, and they better stop the run on early downs as well or Brady will drop a 50-burger on them.