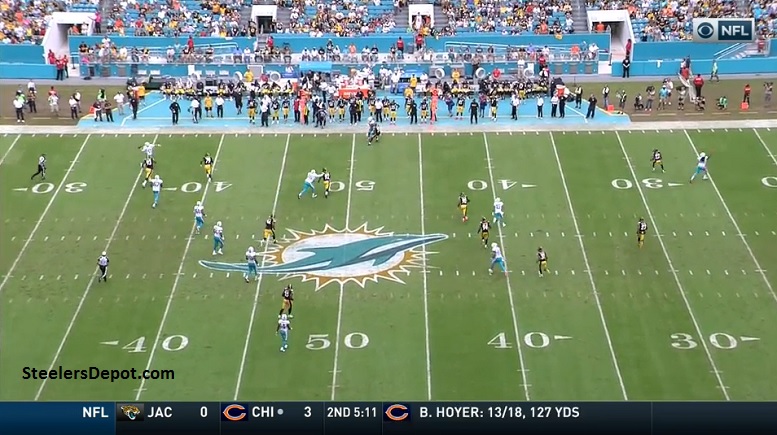 With 10:45 left in the second quarter, Steelers defensive tackle Daniel McCullers was able to get good initial pressure on Tannehill on a 1st and 10 play from the Dolphins 46-yard line. McCullers, however, sort of lets up after he sees Tannehill’s arm go forward and at that point the quarterback is able to escape the pocket to his left.

As far as the Steelers coverage on that play goes, they initially look to have the deep areas of the field bottled up as the play starts to breakdown as they are in cover-3 with zone underneath. As Dolphins MarQueis Gray starts to break his route off vertically, Steelers cornerback William Gay pauses momentarily as he sees Tannehill start to throw. That pause allows Gray to get some separation over the top and Tannehill launches a pass that travels roughly 52 yards in the air and over the head of Gay for an easy completion.

For the life of me, I can’t understand why Gay let up. Perhaps he didn’t think Tannehill could throw the football that far. Regardless, what looked like a play that was covered from the start, ended in 53-yard reception and ultimately a Dolphins field goal, their second of the game.

With 1:09 left in the first, Tannehill once again was able to connect on a deep pass and this time it went to wide receiver Jarvis Landry on 3rd and 7 play from the Steelers 41-yard line.

On this play, the Steelers are once again playing cover-3 and the Dolphins try to exploit it by running two vertical routes on the left side in an attempt to stress cornerback Artie Burns on his third of the field. The inside route is a straight go while Landry presses his to the outside corner at roughly 12 yards past the line of scrimmage. Burns is so concerned that safety Mike Mitchell won’t be able to get over the top for the inside go route that he chooses to stay on that wide receiver instead of Landry. By the time he sees where the ball is going, it’s too late.

Burns has got to trust that he’ll get the help from Mitchell down the seam. Should Mitchell fail to get there, it’s on him. In my opinion, this is a case of a young player trying to do too much and not trusting the defense or his teammates. As defensive coordinator Keith Butler said recently, “Do your job.” In this instance, Burns tried to do two jobs and it resulted not only in a 39-yard completion late in the first half, but a touchdown two plays later.