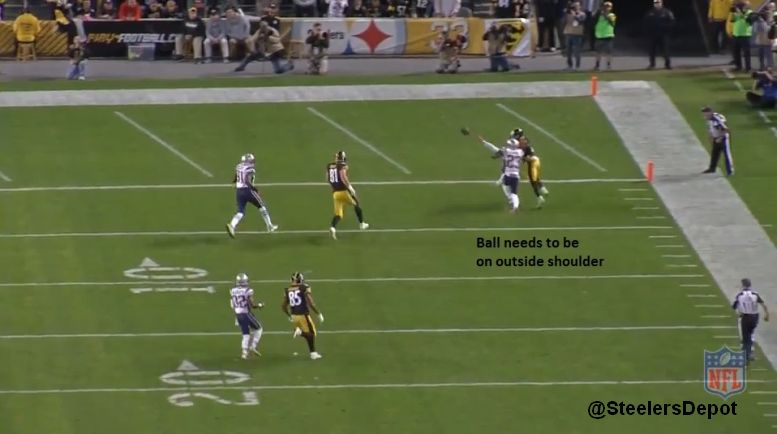 Game notes from the Pittsburgh Steelers 27-16 loss to the New England Patriots.

– Steelers took a page out of the Patriots’ playbook, opening up in a 12 personnel empty set on the first play of the game. 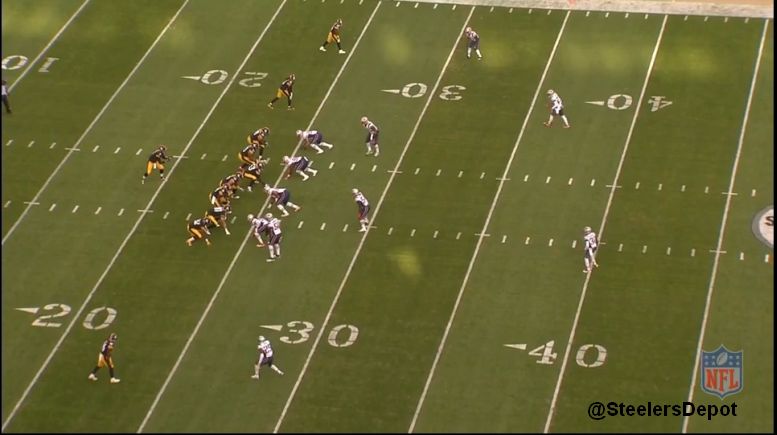 – First third down of the game. Landry Jones, as he has his career, struggling with ball placement on short throws over the middle. Ball slightly behind Xavier Grimble, he has to slow up for it, and the defender makes the tackle. Pittsburgh forced to punt. 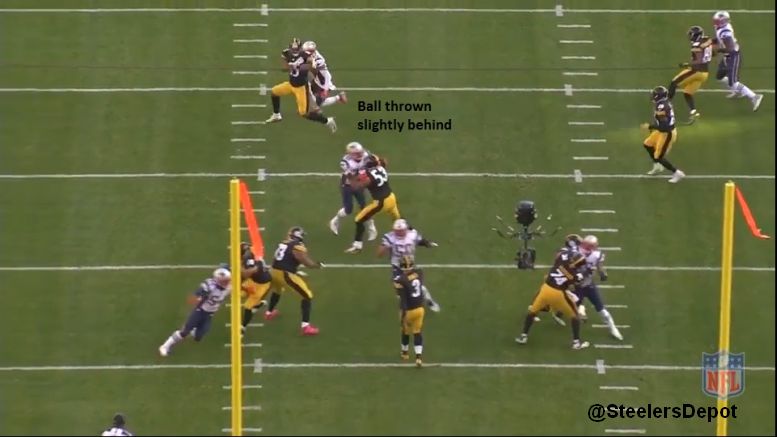 – Punt coverage. On the line. Vince Williams-Steven Johnson-Greg Warren-Tyler Matakevich-Anthony Chickillo. Jordan Dangerfield/Sean Davis the wings with Fitzgerald Toussaint – surprisingly not Robert Golden, something to watch – and Sammie Coates (why???) and Darrius Heyward-Bey the gunners.

– Nice split dig concept. DHB clears out the FS down the middle, Antonio Brown on the dig. 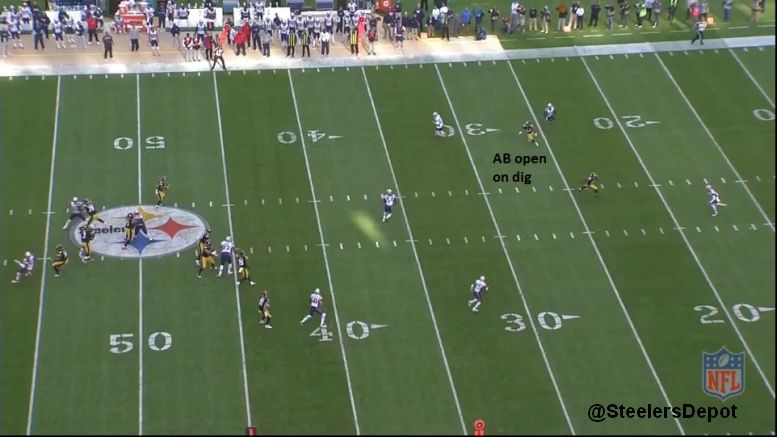 – Ricardo Mathews nice use of hands, swimming over the rookie left guard. 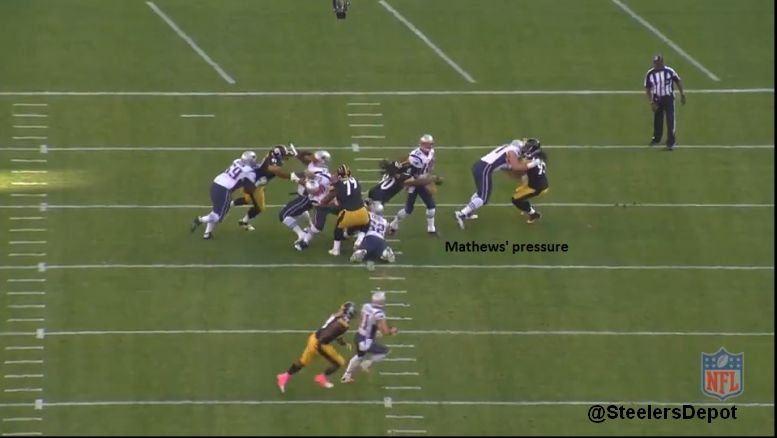 – Steelers keep showing some new looks. Anthony Chickillo kicked inside, hand down, with Vince Williams at OLB. Saw it a lot. 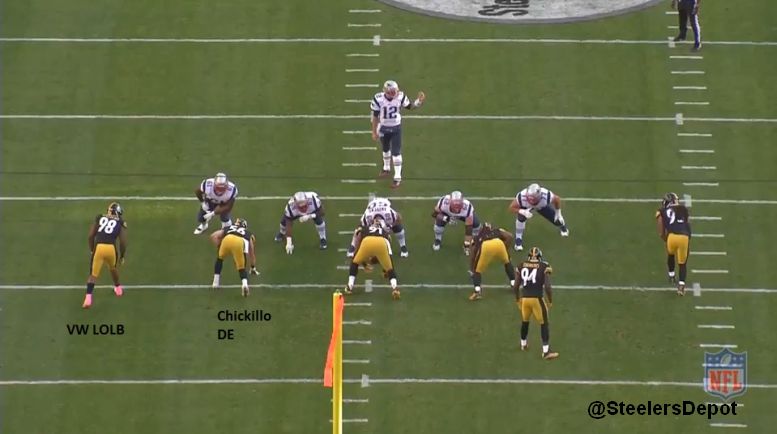 – Robert Golden showing the ability to be physical at the LOS. Meets the fullback in the hole, blows this run up.

– This 3rd and 13 drag to AB is by design. One route concept. Can definitely understand people not liking this but wanted to clear up that’s a Todd Haley thing, not a Jones’ decision. 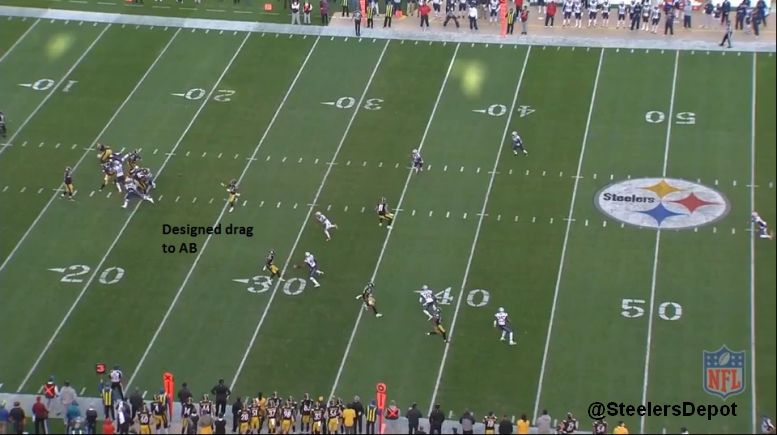 – All around, good flow by this defense on the Patriots’ zone run. Stephon Tuitt cleans things up. 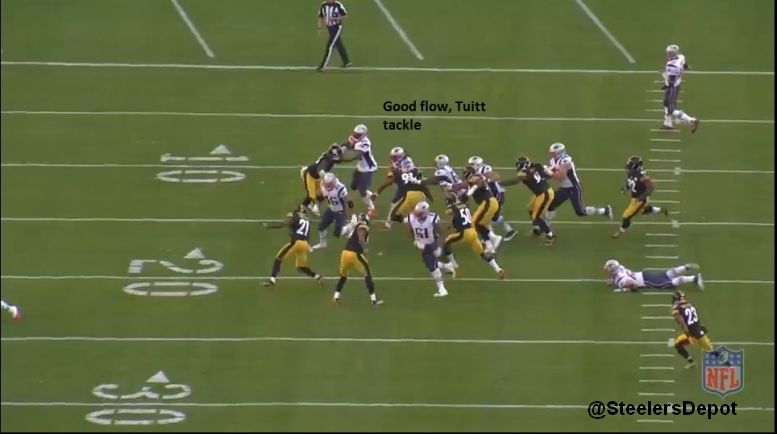 – Artie Burns taking a loooong time to break down on this curl. Bottom of the screen.

– Doesn’t look like Ryan Shazier is getting width to the flat on this third down. Lucky the pass is dropped or else it’s a conversion. 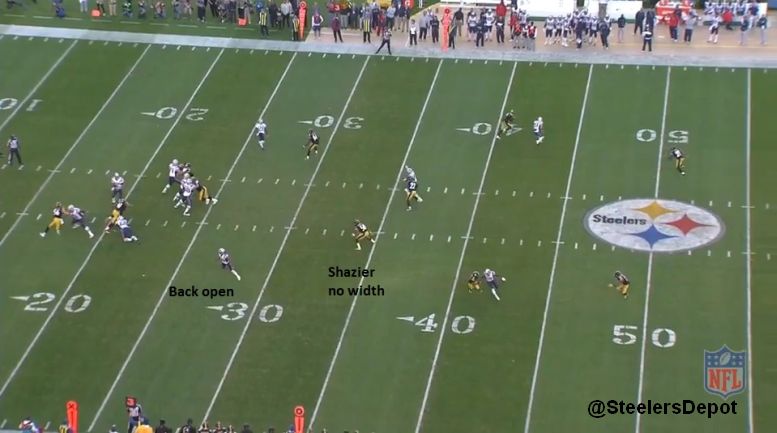 – Cobi Hamilton had a good game catching the ball but missed badly on this attempted crack block on Patrick Chung. If he connects, it leaves Le’Veon Bell one-on-one with the corner. Still, Bell is able to turn this into a 12 yard gain. I bet he scores if Hamilton executes. 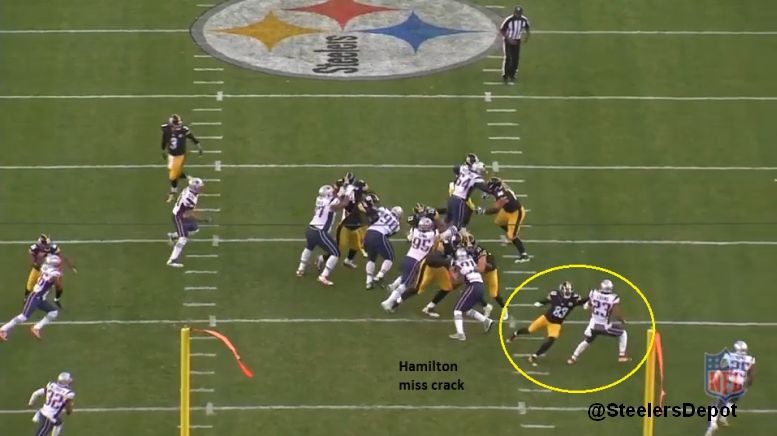 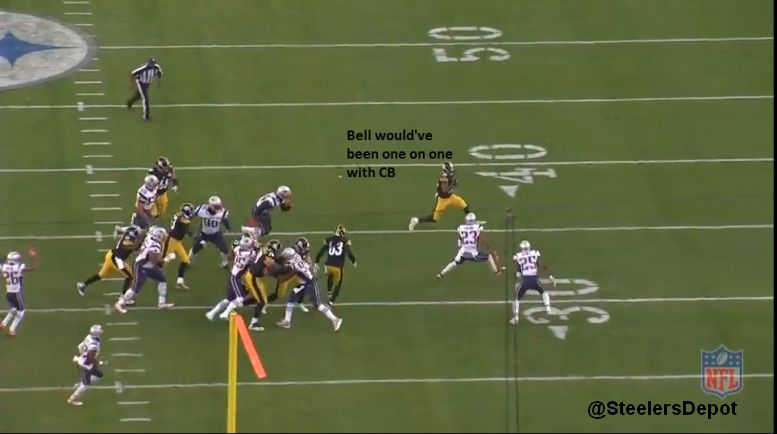 – Good eyes by L.T. Walton to bat this ball. 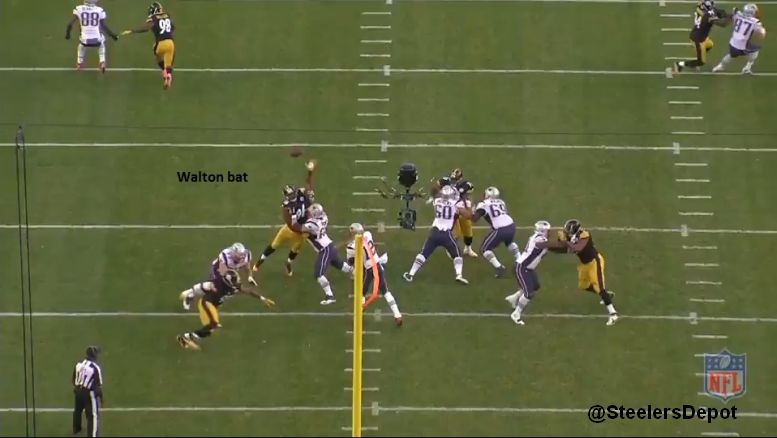 – Steelers are in man coverage. Know they’re getting either Julian Edelman or Rob Gronkowski on Lawrence Timmons. Here, it’s Edelman. 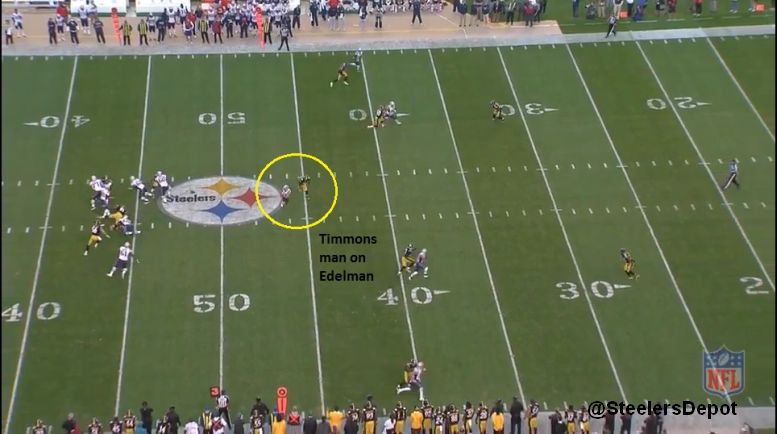 – Kudos to Chris Hubbard for getting out in space on this pin/pull. Cuts the CB.

– Good down block on the MIKE by Grimble. 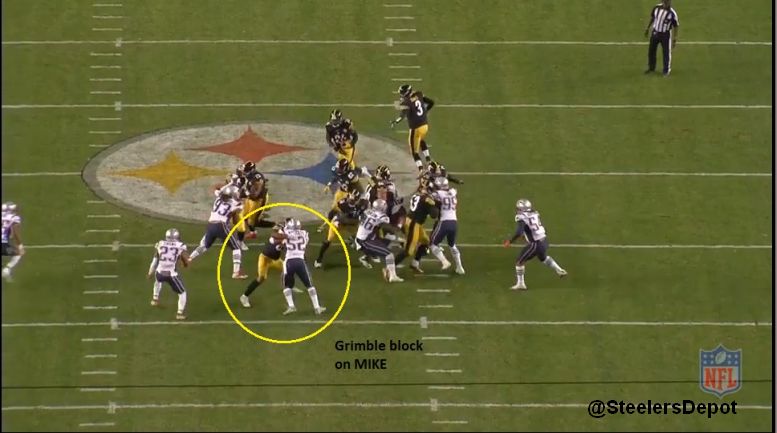 – Jesse James’ run blocking not as bad as I originally thought but a bad whiff here. 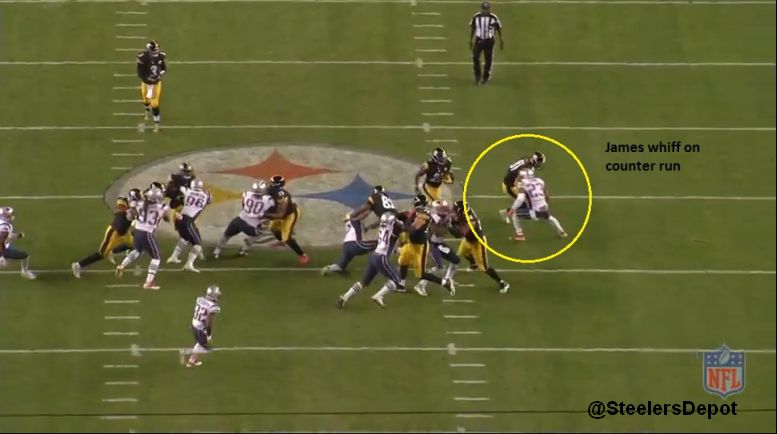 – This throw by Jones needs to be on the outside shoulder where the DB has to play through Bell, not to the inside. Missed chance.

– Strength and leverage by Javon Hargrave. 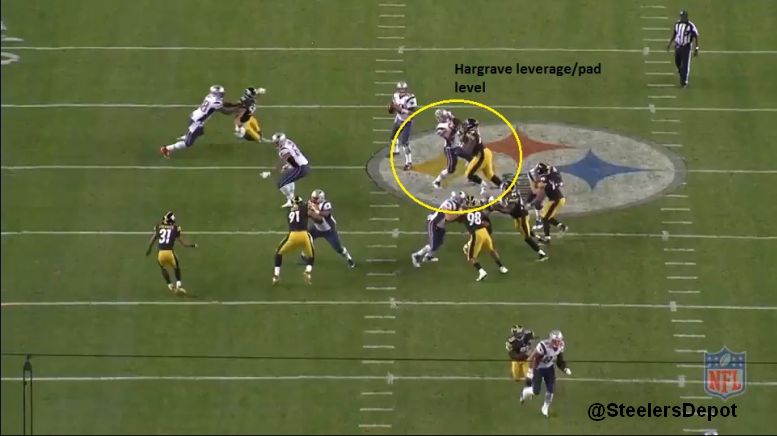 – Also thought Hargrave did a nice job handling double-teams against the run. Other guys have to take advantage of being free or getting off their one-on-one matchups.

– Jones needs to take off here. Has a lane, has to trust his legs. Instead, he bails, retreats, and as a right-handed quarterback, starts moving left. Incomplete. 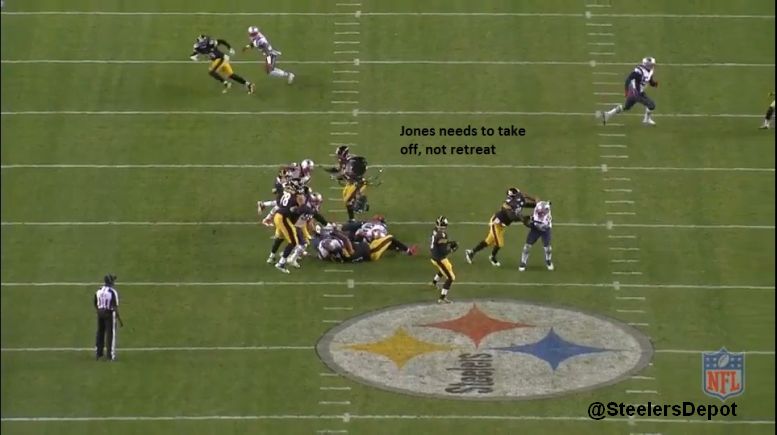 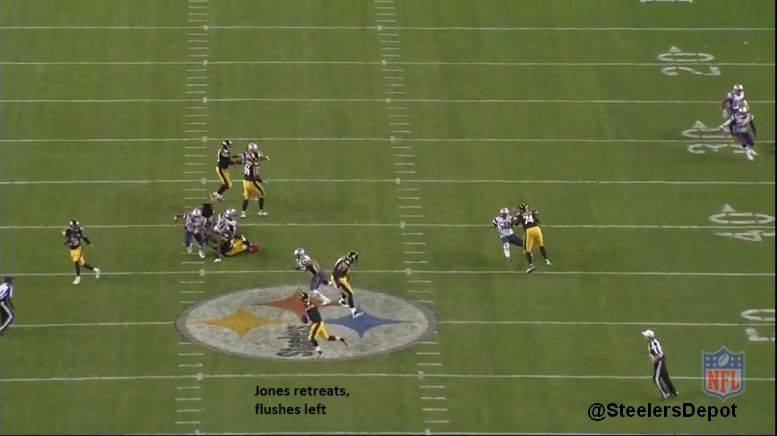