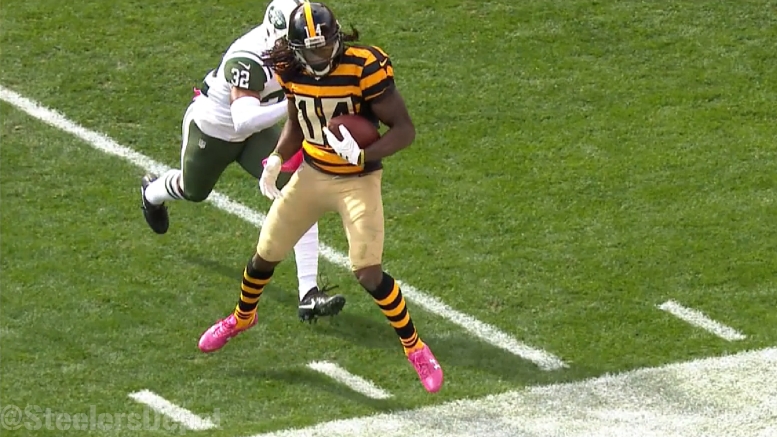 Minor update on Sammie Coates from ESPN’s Jeremy Fowler. Fowler has reported Coates is expected to be active tomorrow but his snap count is unclear.

Coates suffered a laceration in his left hand last week, requiring stitches and there are rumors he also suffered a fracture in his hand too. He missed the first two days of practice and got in a limited session on Friday.

Pittsburgh officially called up Cobi Hamilton to their 53 man roster this afternoon as insurance for Coates if he can’t play or is on a pitch count. It is probably fair to assume Coates does not play a full compliment of snaps, especially as a young player who missed a lot of practice reps during the week.

Luckily for Pittsburgh, Todd Haley’s offense demands its receivers to be versatile and basically play all over the field. Hamilton is generally an outside receiver but has played in the slot during training camp and the preseason.

If Coates is a full-go or close to it, he will start opposite of Antonio Brown. If he isn’t, Darrius Heyward-Bey will figure to get the starting nod. Eli Rogers will work in the slot. Heyward-Bey will backup to Rogers while Hamilton will be a backup on the outside.

Even luckier for Pittsburgh is the Dolphins’ secondary, as we’ve written about several times this week. They too have injury questions, potentially missing star safety Reshad Jones. Their cornerback spots have been in flux, signing two names this week to try and bolster the group, and haven’t picked off a quarterback for the past 18 quarters.

Ben Roethlisberger is 4-1 in his career against Miami, completiong 66% of his passes, throwing nine touchdowns to only two interceptions, despite playing in some less than ideal weather conditions, as Dave Bryan wrote about this morning.