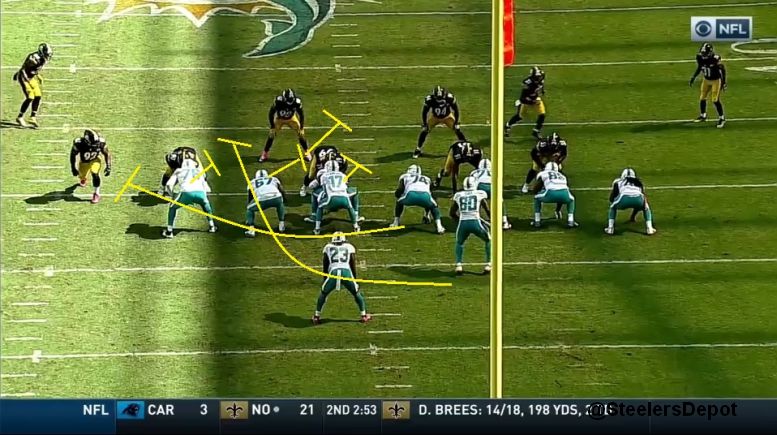 I’m going to take a wild stab at it and guess the Pittsburgh Steelers weren’t too pleased with their run defense yesterday.

In fact, it was basically as bad as it’s ever been under Mike Tomlin. Win or lose, I’m always interested in the “why.” A lack of coaches tape makes some of that hard to figure out so we’ll focus on plays that gives us a good end zone angle to best breakdown the, well, breakdowns.

This first one is a Counter Trey that goes for 14 by Jay Ajayi. Basic gap run principles. A strong push to the first level defenders, here that’s nose tackle Javon Hargrave, with right guard Jermon Bushrod pulling and tight end Dion Sims behind.

The Steelers are poor at the point of attack, especially with left tackle Branden Albert getting a good push on Ricardo Mathews. I do think Mathews is able to hold his gap though relatively well. 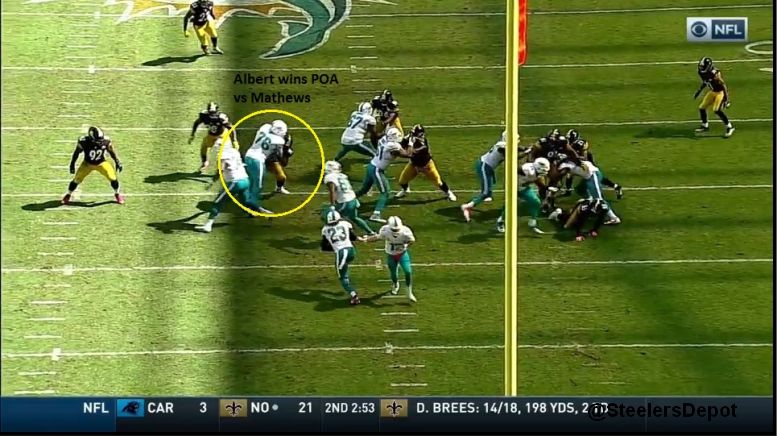 James Harrison is the force/edge defender here. Which makes me wonder why Vince Williams is sliding over so far and basically stacks on top of Harrison. 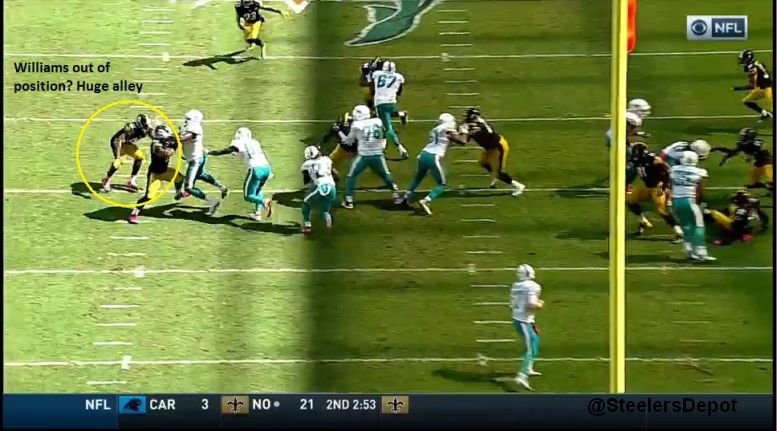 It creates a huge alley. Bushrod kicks out Harrison and the tight end has a huge hole to lead through. Mathews is unable to work off Albert’s block in time. Ajayi follows through.

Left guard Laremy Tunsil does a nice job on Lawrence Timmons at the second level, who tries to slide over but winds up creating a cutback lane for Ajayi, away from alley defender Mike Mitchell.

Maybe Williams was in the right here. Or saw most of their power runs were bouncing to the perimeter. Ones earlier in the game did. But it seems like he got himself out of position and created the alley.

The run goes for 14, the first play of a drive that would give Miami the lead right before the end of the half. Big swing in how the game looked.

Fast forward to the next Miami drive, the opening of the second half. Miami took advantage of this several times, a real schematic win for them.

Mitchell and Robert Golden are great at supporting the run. Strong, physical, face in the fan types who are generally good tackles, especially Golden, who’s the best they got. So when those guys rolled into the box, Miami was making sure to crack them with their receivers, basically seal them off, and force the cornerbacks to replace.

You can get an idea of it here from Dick LeBeau’s playbook. 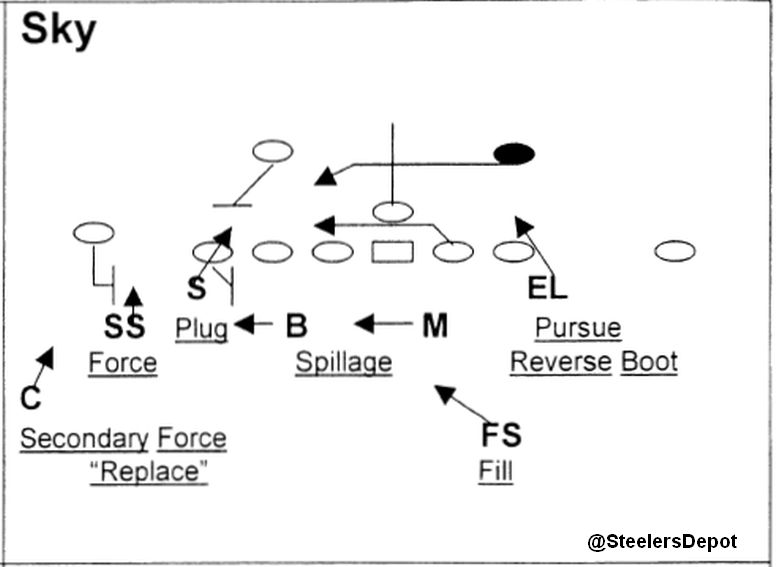 That’s the concept for the defense. Crack/replace. If the safety is cracked, the cornerback must replace the safeties role as the alley or in this case, force defender.

And when your alley guys are Artie Burns and Ross Cockrell, you’re going to have a bad time. Pizza’d when you should’ve french-fried.

Golden is rolled into the box with wide receiver Kenny Stills, #10, in a reduced split. He’s not a big guy, under 200 pounds, but he seals Golden on this play, forcing Burns to replace. You can see Golden point something out, probably that, right before the snap. 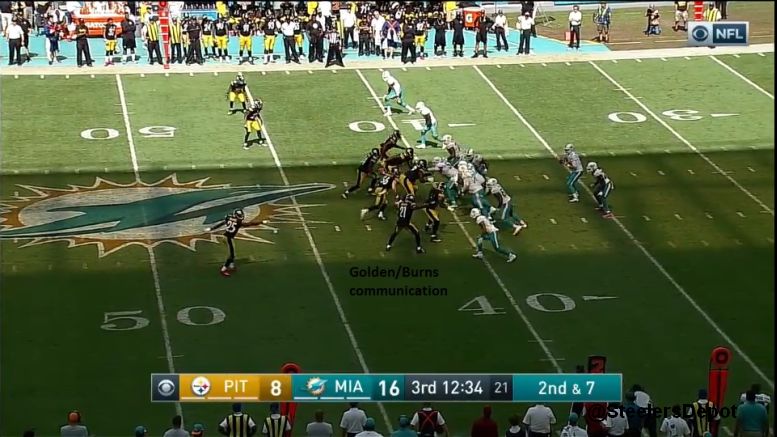 Burns points too and I’m not sure if he’s thinking that Golden should become the edge player, not himself, while Burns becomes the alley defender. That wouldn’t make a lot of sense though. 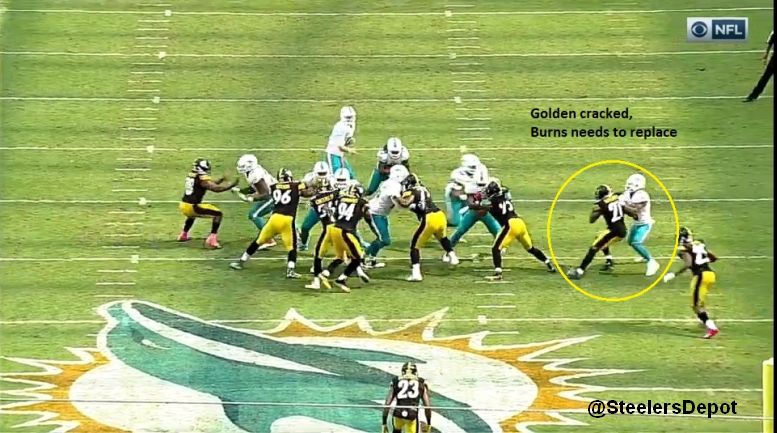 There is no perimeter defender on another gap run, the backside right guard pulling, allowing the back to freely hit the edge. 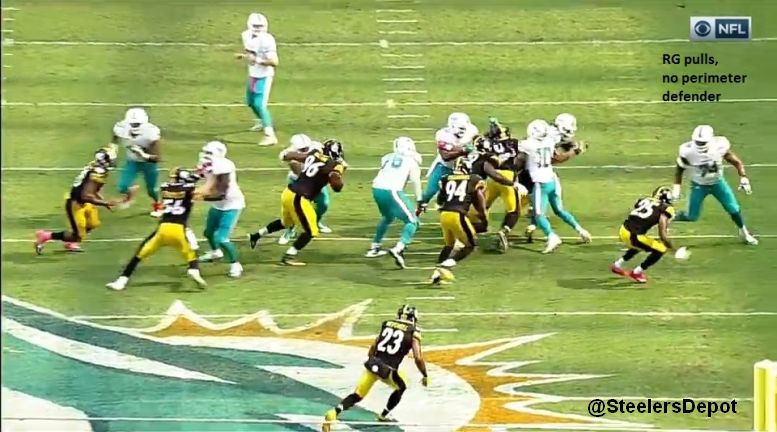 This isn’t the first time it’s happened to Burns, why I’m more comfortable putting it on the rookie. I recall him doing similar in the final preseason game against the Carolina Panthers. This wasn’t a crack replace, just an issue of Burns getting caught peeking inside and giving up the edge.

Sunday, the run goes for 20 yards plus another 15 on Mitchell’s personal foul. Fortunately, the Steelers end this drive with a Daniel McCullers’ block.

Their next drive. Same. Exact. Idea. So frustrating you want to burn the tape. Golden rolls down, gets cracked by DeVante Parker, and Cockrell does a poor job replacing, diving at Ajayi’s ankles and whiffing. This time, Cockrell is asked to become the alley defender. 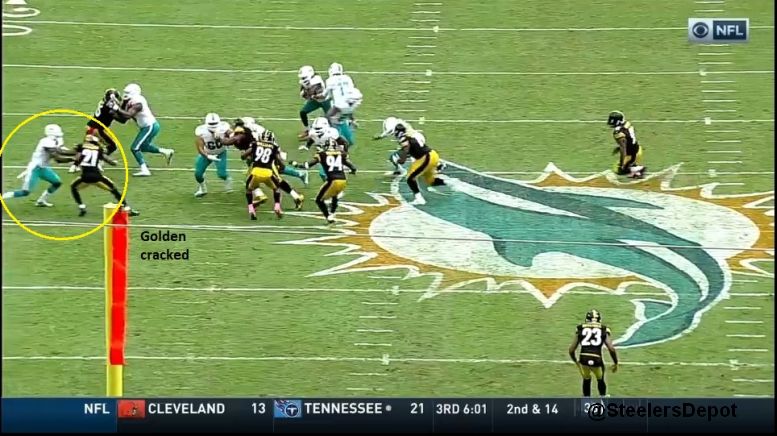 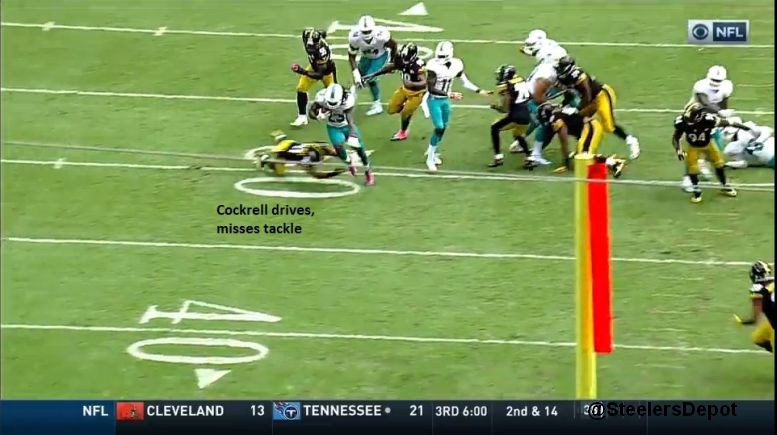 Sure, there are some other issues on this play, Stephon Tuitt is off his feet, maybe Vince Williams’ reaction was late, but Cockrell has to make this play. Decent and good runs have to stay at that. They can’t turn into great ones. And this one does, Ajayi ripping off 33.

Here, Miami finds the end zone and makes the game kinda feel like a lost cause, even with an entire quarter still to play.

Make no mistake. Run defense is an 11 man job. The failures here can not be isolated to one player or one unit. Everyone is bad when you give up over 200 yards.

But Miami showed some serious flaws with Pittsburgh. Their perimeter run defense, their cornerbacks, are far from where they need to be, and you can bet someone like Bill Belichick will exploit that to the fullest a week from now.

Though Justin Gilbert’s Cleveland tape didn’t suggest much better as a run defender than Burns, his experience in the league and now having time in the Steelers’ system might warrant a look in the nickel spot next week. A rookie like Burns who struggled so much against Miami is probably not going to have a lot of success against one of the league’s best offenses.

Burns will likely maintain a role anyway against the Patriots’ big tight ends but a switch for nickel groupings could be a way to go.

It can’t be any worse than this.