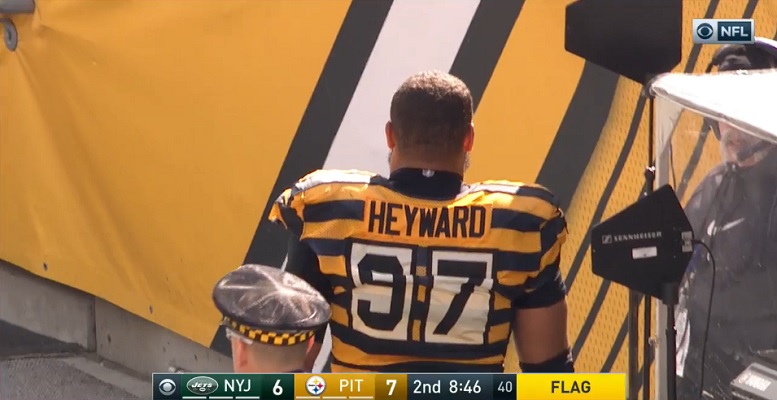 Here’s one more thing we don’t know…when the captain of the defense will return to play.

Head coach Mike Tomlin can’t answer that question for sure, and neither can I.  Most NFL reporters have estimated that Heyward won’t be back on the field until the week 9 matchup against their division rival Baltimore Ravens, following the bye week.  It’s the safe guess and it makes a lot of sense.  But as Tomlin said in his press conference this week “[Cam] doesn’t fall in the realm of normal” and would only rule him out for this Sunday, preferring to re-evaluate him the following week.

So what do we know?  Heyward reported that he didn’t feel a pop, but once he sustained the injury, he was ruled out to return and was seen on the sideline in a t shirt.  He underwent an MRI shortly after the game, which is pretty quick; NFL players often wait until Monday for Xrays.  The results of the MRI were never reported by NFL “insiders” like Ian Rapoport, which points towards a less serious situation.  When it’s bad, it’s typically a headline that same day.

Hamstrings, like other soft tissue injuries, are tricky to predict and of course I haven’t examined Heyward or seen the results of his MRI.  But let’s take look at what’s involved in recovering from a hamstring injury.

As always, we need to start with a quick anatomy briefing.  The hamstring is actually 3 muscles, the semitendinous, semimembranous, and the biceps femoris:

Fun fact:  The origin of the word hamstring comes from the old English hamm, meaning thigh. String refers to the characteristic appearance and feel of the tendons just above the back of the knee.

Hamstring injuries occur most frequently in sports that require the athlete to sprint with sudden starts and stops.  From the AAOS: During sprinting, the hamstring muscles contract eccentrically as the back leg is straightened and the toes are used to push off and move forward. The hamstring muscles are not only lengthened at this point in the stride, but they are also loaded — with body weight as well as the force required for forward motion.

With a grade 1 hamstring strain you may have tightness in back of the thigh but will be able to walk normally. You will be aware of some hamstring discomfort and unable to run at full speed. There will be mild swelling and spasm. Bend your knee against resistance is unlikely to reproduce much pain.

With a grade 2 hamstring strain your walking pattern will be affected and you will most likely be limping. Sudden twinges of hamstring pain during activity will be present. You may notice some hamstring muscle swelling and your hamstring will be tender to palpate. It will also be painful for you to bend your knee against resistance.

A grade 3 hamstring strain is a severe injury involving a tear to half or all of the hamstring muscle. You may need crutches to walk and will feel severe pain and weakness in the muscle. Swelling will be noticeable immediately and bruising will usually appear within 24 hours.

Grade 3 injuries can involve a full separation of the muscle from the pelvis, where the tendon can actually cause an avulsion of the pubic bone, resulting in a “popping” sensation and a nasty looking wad of muscle on the back of the thigh.  I’m not posting a photo.  You’re welcome.

MRI is probably the best way to define hamstring injuries, which are graded by the radiologist based on:

Treatment includes the traditional RICE (rest, ice, compression, and elevation).  After the swelling decreases, sports massage and ultrasound therapy can be used as well as foam roller exercises to promote myofascial release to the muscles.  Once the acute phase is passed, stretching and strengthening exercises are done but only if pain free.  Eventually, the player will progress to more dynamic and functional exercise and finally graduate to football-specific drills.  How long this process takes depends, of course, on the extent of the muscle and tendon damage sustained.

Pittsburgh’s own Dr. James Bradley and colleagues wrote a pretty slick paper on hamstring injuries in professional football players and the use of MRI to predict return to play.  Using standard radiology grading of hamstring injuries, they looked at 38 players with a total of 43 injuries (some were bilateral and recurrences were also included). They developed an MRI score based on player age at the time of injury, number of muscles involved, location of injury, insertional injury, percentage of muscle injured, retraction of muscle or tendon, and length of long axis T2 signal.  They also analyzed the MRI grade by games missed:

Here is what they concluded:  After acute hamstring strain, players had a longer recovery when they were found to have multiple-muscle/tendon involvement, a high percentage of muscle involvement (> 75%), long T2 sagittal plane signal (> 10 cm), and retraction. They determined that MRI is reliable in determining severity of injury and time away from sport in hamstring injuries in professional football players.

Taking all of that into account, the Steelers training staff may be able to predict when Cam can return to practice.  If his MRI did not show significant muscle involvement, it is still possible that Heyward could take the field when the Steelers host the New England Patriots in week 7, a mere 2 weeks after his injury.

They need to be careful not to rush him back too soon, however.  A hamstring injury can plague a player for an entire season if aggravated by returning too soon.  Remember LaMarr Woodley in 2011?  He missed 4 weeks including a bye, came back for a week, missed a week, came back another game, and missed the last 2 weeks.

That same year, Arian Foster tweeted his MRI and noted the “anti-awesomeness” on his hamstring.  John Clayton responded with a prediction that the RB would miss 3-4 weeks based on an ESPN doctor’s evaluation of the single MRI image: 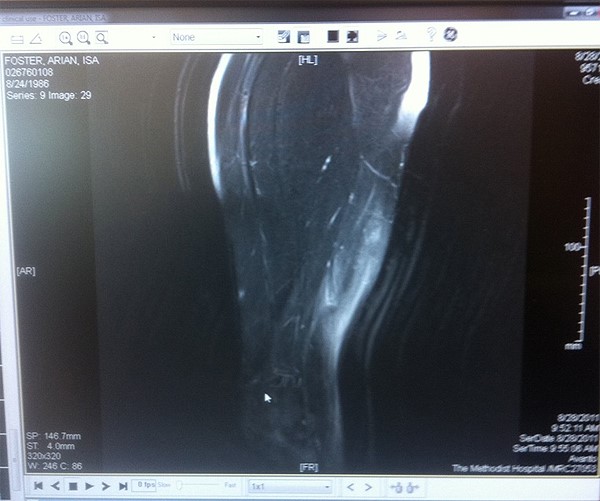 Although Foster was sure he would play in week 1, his missed the season opener 2 weeks after his initial injury.  He played week 2 and re-aggravated the injury.  He returned again in week 4 and was able to play the rest of the season.

Obviously, the Steelers need to start the players who give them the best chance to beat the Patriots, a game that may well be a preview for the playoffs.  A healthy Cam Heyward would be a huge advantage and depending on his MRI findings and symptoms, he may be good to go.  The odds are that the coaches and trainers will hold him back until after the bye week.  Then again, Heyward overcame a high ankle sprain to play in the season opener, so I won’t rule him out just yet.  As with all soft tissue injuries, we will have to wait and see.