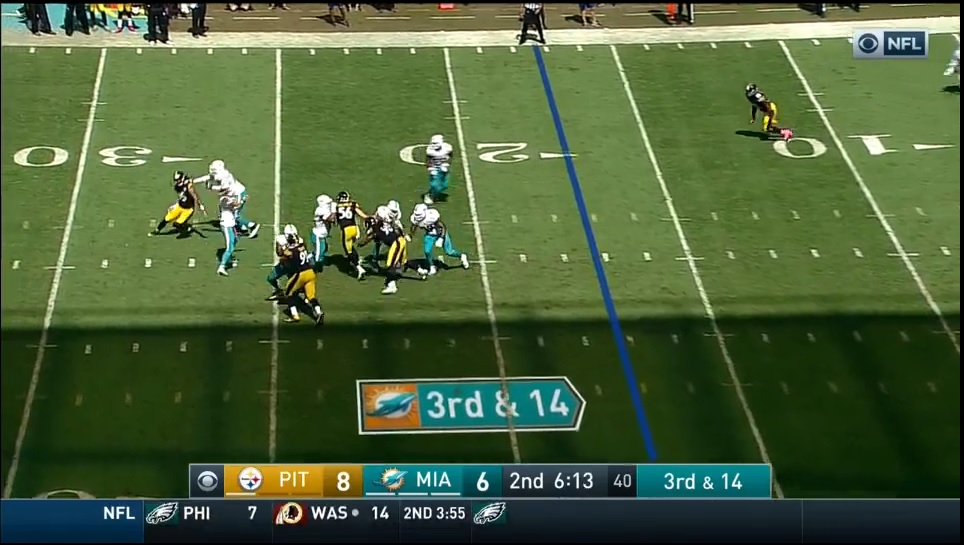 I don’t think you needed our numbers to tell you this but Ryan Tannehill could’ve written a novel in the pocket Sunday afternoon. Or, with the way they made him look, maybe he could’ve written up a new contract.

It’s been a roller coaster season for the Pittsburgh Steelers trying to get pressure on the quarterback. The last two weeks, it had been better, a whopping 26 pressures, and as such, two victories.

That all crashed back to Earth yesterday. According to the charting we’ve just completed, the Steelers registered just two pressures on Tannehill. One by Daniel McCullers and another by Stephon Tuitt. McCullers was unable to finish his play, resulting in a 53 yard completion to MarQueis Gray. Tuitt was actually able to knock Tannehill down with a pretty hefty hit but the pass was still complete for a three yard gain.

Granted, the Dolphins schemed to get the ball out quick and they, unlike the Kansas City Chiefs and New York Jets, had the benefit of playing with the lead throughout. But two pressures in any game, zero from their outside linebackers, the heart and soul of a pass rush, is not going to win many games.

Here are the season total of pressures by each outside linebacker.

Essentially, it works out to two pressures per game from this group. Not sacks, not even necessarily quarterback hits, or pressure that caused incompletions, just a blanket look at it. Some of them are gimmies too, like Moats’ pressure on his sack/tag of Andy Dalton in Week 2.

I don’t have the numbers for the number of pressures others have, all I know it’s way more than Pittsburgh, but as just an example to help frame it, rookie Joey Bosa – who missed the first month with contract issues and injury – already had 14 going into this weekend’s slate of games.

Joey Bosa missed the first four weeks of the season, but he already leads all rookie defensive lineman with 14 pressures #Chargers

Fourteen. What a fun dream that’d be.

This isn’t Week Two anymore where the sample size is small and you’re waiting for teams to adjust. The Steelers have one more game on the docket before they reach the halfway point of the season. What you have is what you have.

And in Pittsburgh, it isn’t much.

From a sack perspective, this group is about as poor as you can assemble. Just 2.5 from the unit, again, Moats’ was soft, despite being thrown at the fourth most in the league and playing in three games where the Steelers went up by double-digit points.

That’s not to say that Keith Butler is being incredibly passive. He wasn’t yesterday, blitzing seven times though clearly, with little effect. It’s been a safer pressure, a couple of four man blitzes, to try and protect a young secondary. But little can mask the plain lack of personnel and at the risk of beating a dead horse, will compel the team to make a big splash at the position in the offseason.

And if they don’t, that’s a failure you can put squarely on Mike Tomlin and Kevin Colbert.