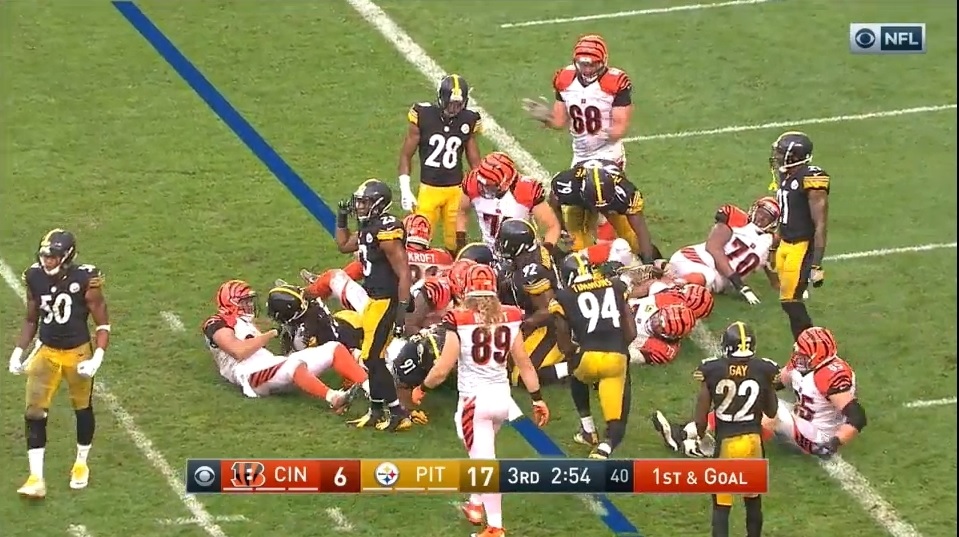 Matthew Marczi and I have decided to write a weekly article based on our charting notes from the previous week’s game. Every month or so, I will also have “yearly recap” article, like we did last year. So let’s get to some of the notable from the Pittsburgh Steelers’ Week Two win over the Cincinnati Bengals.

– Excluding those of the “no play” variety, the Steelers defense had 73 snaps against the Bengals.

– Of those 73, the Bengals ran just 21 plays in Steelers’ territory. Only four of those occurred before the last minute of the first half.

Compare that to a week ago when Washington had just two snaps on are inside their 20.

– Pittsburgh was in sub-packages, nickel or dime, for 61 of 73 snaps Sunday. That’s 83.6%. 30 plays came in dime. In the regular season last year, the Steelers used dime just 61 times. Factor in Week One and we’re already closing in on the same usage amounts.

– Believe it or not, Keith Butler actually blitzed his usual amount Sunday. Officially, 13 of 57 opportunities and there were a couple of blitzes that came on run plays. That’s 22.8%, right in line with what he did last year (21.7 and 22.7).

– He rushed five or six defenders nine times. They were all blitzes.

– Robert Golden blitzed three times. Ryan Shazier blitzed on another five, four of them by himself. He registered two pressures.

– The Steelers lone sack was by Arthur Moats, a play where he originally dropped into coverage.

– All of Javon Hargrave’s official snaps came in the Steelers base 3-4. There was one more when he was in dime but the play was negated by penalty.

– Stephon Tuitt dropped into coverage, peeling off onto the back in the flat, three times. Saw that a lot in the preseason and it carried over.

– Shazier lined up off the edge 13 times Sunday.

– Because of all the dime used, Lawrence Timmons saw the field less than 60% of the time. There were stretches where he went six and ten consecutive snaps without seeing the field. Value of the position just isn’t there to justify re-signing him.

– Ross Cockrell was moved around all day, staying on top of A.J. Green. 26 snaps at left corner, 45 at right corner.

– The Steelers still haven’t used a goal line package once this season, preseason or regular season, and decided against it Sunday as well even when the Bengals had the ball at their one. They made almost no personnel changes to their base 3-4 with one exception. Sean Davis replaced Ross Cockrell as the RCB.

– Only two defenders have played every single snap for Pittsburgh this year: William Gay and Golden.