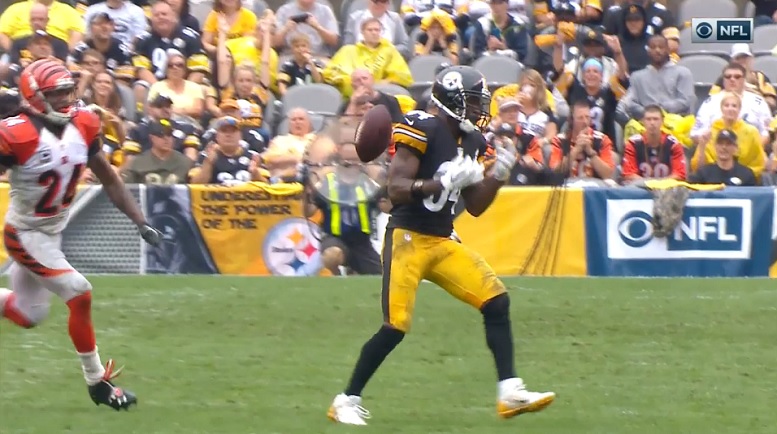 Those in attendance at Heinz Field last Sunday witnessed an event so rare that it may seem fair to describe it as the football equivalent of an asteroid nearing Earth. This phenomenon, visible to the naked eye of viewers everywhere, was the off game of 28-year old Pittsburgh Steelers wide receiver Antonio Brown.

Brown’s final line against the Cincinnati Bengals read 4 receptions on 11 targets for 39 yards, numbers that have not been seen alongside Brown’s name on the box score in almost four years.

1358 days or 3 years, 8 months and 19 days. That is the amount of time in-between games in which Brown has been held to four receptions or fewer with Ben Roethlisberger at quarterback. This would come on December 20th, 2012 in the season finale against the Cleveland Browns, a game in which Brown recorded just two receptions for 22 yards.

Brown’s off game on this date is shared with other strange occurrences such as being the Steelers first meaningless regular season game since 2006 and Plaxico Burress’ first touchdown reception from Roethlisberger since 2004.

While a four-year reception drought may seem out of ordinary, it is not alone in being Brown’s only anomaly of note that took place during the game against the Bengals. An uncharacteristic drop and missed throws contributed to Brown posting the second lowest catch percentage of his career this past Sunday as he was only able to convert 4 of 11 targets into receptions, good for 36.4%.

This is Brown’s lowest total in over 5 years, dating back to the 2011 season opener against the Baltimore Ravens when Brown only snagged 2 of his 9 targets, good for a 22.2 catch percentage.

“He is the best in the world,” Roethlisberger said of Brown on Wednesday, according to steelers.com. “We won the game, that is most important and I think that is most important to him too. He will get his catches. He will get his yards. He will help us win football games. He is helping us even when he is catching three or four balls because he is taking a lot of attention away from other guys. That is the reason the tight ends were open across the middle, because he is attracting two or three sets of eyes. He is helping us win even when he is not catching balls.”

Although, there is never a good time for your top wide receiver to have an off day, the Steelers have to be delighted with how they managed. The asteroid that was Brown’s off day narrowly missed Heinz Field as the Steelers defeated their division rivals and there is good reason to believe the asteroid will not be returning anytime soon.

Brown’s career path is filled with consistency, nabbing 5 receptions or more in 70% of his regular season games and a career catch percentage of 66.3, good for 6th in active players who have at least 500 targets.