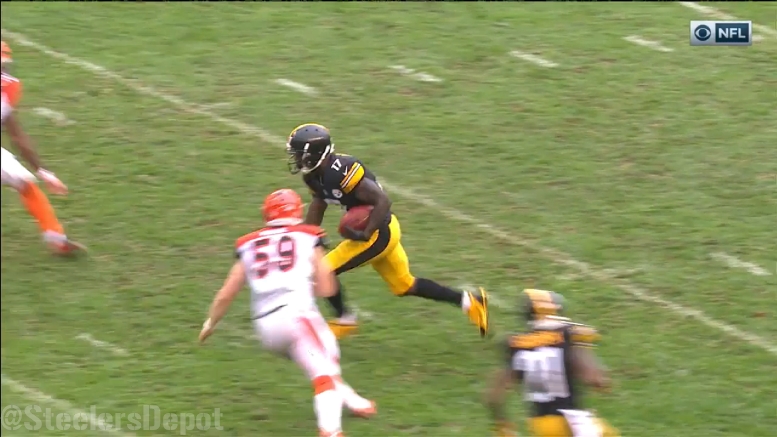 During the Pittsburgh Steelers’ victory over the Bengals on Sunday, they provided a rather unconventional strategy—at least for them—when it comes to attacking the punt return game. As we have talked about several times over the past couple of weeks, we have talked about how the Steelers list Antonio Brown and Eli Rogers as co-starters at punt returner.

On Sunday, they actually employed that strategy in reality, and it seems that the only reason that they did not do so in the opener is because during the game against Washington, they received only one punt return, which Rogers fielded for a fair catch.

During the second game of the season, however, the Steelers’ defense forced Bengals punter Kevin Huber to punt not once but nine times. And both Rogers and Brown lined back deep to return punts. But it was not as equitable as it might have seemed during the course of the game.

While Rogers only returned three punts, and Brown returned two punts, those were the only two punts for which Brown lined up to return. Rogers was back deep to receive all of the other seven punts, though two went out of bounds and the other two were fielded for a fair catch.

So what exactly is the strategy? Below is a table of the scenarios of each Bengals punt in order to put them into context.

As you can see, the bulk of the opportunities went to Rogers, but they came in a variety of situations—although, of course, none of them came with the Steelers trailing, since they did not trail at any point during the game. That may be a factor to monitor.

It might be notable that Brown’s two opportunities came early in the game, the first with no score with the ball at the Bengals’ 26-yard line, and then the second with a seven-point lead, but with the ball all the way back at the 12. Perhaps the coaching staff felt that these situations were both good opportunities to get a good return, and were good moments for a jump-start.

At the end of the day, both Rogers and Brown ended up averaging exactly nine yards per return. Rogers gained 27 yards on his three returns, while Brown gained 18 yards on two returns.

It might be worth noting that the Steelers did not feel compelled to take Rogers out when he fumbled the ball on his early third-quarter return, as he also returned the final two punts that the team received afterward.