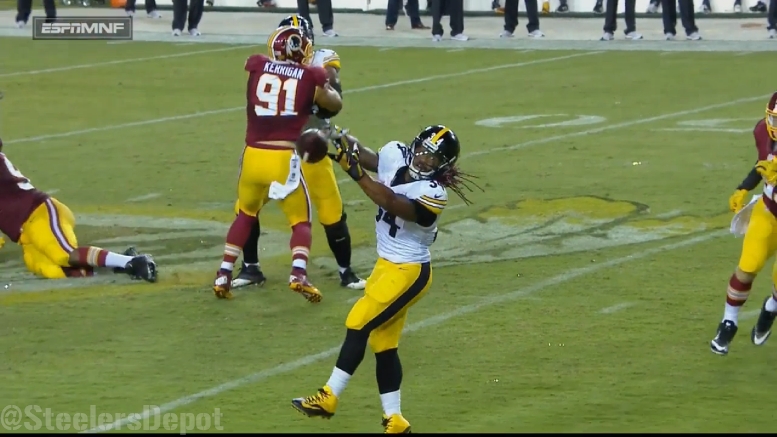 In many respects, as pure runners, Pittsburgh Steelers running backs Le’Veon Bell and DeAngelo Williams might fairly be regarded as equals. Certainly their productivity as ball carriers has been similarly successful since they have been together on the same team.

Williams may lack Bell’s suddenness in changing direction—which is elite-level—as well as his long speed—which is not—but the veteran running back has a deftness and urgency of style when necessary, and great patience when applicable. His 14 rushing touchdowns in 11 starts with Pittsburgh is a better clip than Bell has produced, if truth be told.

One area in which Bell certainly distinguishes himself from his partner, however, is as a receiver, and this is also reflected in how the Steelers use them on the field. While they both have gotten their fair share of targets in the passing game when used as the featured back, the nature of those receptions, and in their roles on passing plays, is distinct.

In particular, the Steelers are far more enthusiastic about using Bell as a proper target as a wide receiver, lining up at the line of scrimmage rather than coming out of the backfield, and this is reflected in the fact that Williams only lined up as a receiver on seven of the 30 passing snaps for which he was in the game, which is a usage rate of about 23 percent. It is interesting to note that Daryl Richardson played two snaps on offense during the game, and on both occasions he lined up out wide.

As I made note a couple of weeks back in detailing Bell’s action in the preseason against the Saints, the All-Pro running back lined up as a wide receiver on seven of the 16 pass plays for which he was on the field, representing about 44 percent of those snaps.

I also made note in a previous article during the Summer that, in the lone game in which Bell and Ben Roethlisberger were fully healthy to start, the running back lined up as a wide receiver 17 times prior to the quarterback’s injury.

I speculated that it was the Steelers’ intention to begin got make greater and greater use of Bell’s abilities as a wide receiver, specifically his size and his ability to run a legitimate route tree, but that those plans ended up being foiled due to Roethlisberger’s injury, and then Bell’s.

As evidenced during Williams’ seven snaps at the line of scrimmage, the veteran running back does not execute a full route tree, but rather runs simple patterns that might be expected of any average running back asked to carry out a similar responsibility.

Williams also does not possess Bell’s sureness of hand, as the veteran dropped two passes that he should have been able to catch in Washington. This is not to say that he is somehow inadequate as a pass catcher—in fact, he had the best season of his career in that regard last year. This is really to distinguish the uniqueness of Bell from most other running backs in the league.