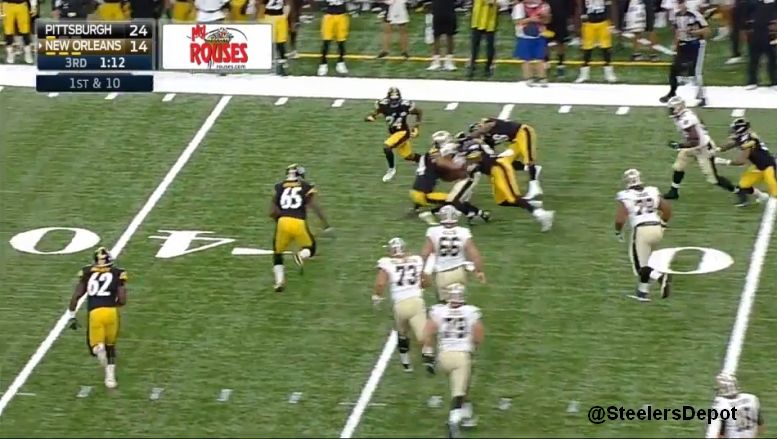 About to gear up for the regular season but wanted to take one last look at what the Pittsburgh Steelers’ defense accomplished in the preseason. These notes come from our charting notes we conduct each week.

– Our sample size is 282 defensive plays, excluding the “no play” occurrences were the ball was never snapped or negated by penalty.

Keep in mind that 4-3, 3-3-5 all came in the second half of the finale when the team ran out of outside linebackers.

So had the team been in their base/nickel, the percentages would’ve looked like this.

Last year, the Steelers were in nickel 65.8% and their base 27.4%. But smaller sample size, less gameplanning, yadda yadda.

– For whatever it’s worth, there were 12 instances the Steelers remained in their base defense against the offense’s 11 personnel. They almost always went into their sub-package when teams went into 11 last year. Just something to watch.

– Breakdown of the numbers of pass rushers sent.

– We are tracking defensive pressures this season. Your preseason leaders across all positions.

– No Steelers, at any position, was penalized more than once.

– Ricardo Mathews’ led the defensive line with 110 snaps. Javon Hargrave was next up with 99.

– In all, the Steelers dropped a nose tackle six times in the preseason. That’s nearly 4% of the time.

– If you’re wondering who got the short end of the stick, it was Devaunte Sigler’s 22 snaps.

– Despite being an established player and recipient of a long-term deal, the Vince Williams led this group with 142 preseason snaps. L.J. Fort was next with 133 while Anthony Chickillo surpassed the 100 mark.

– Tyler Matakevich had just 74 but it was enough tape for the Steelers to keep him around.

– Chickillo actually played very little on the right side. Just ten snaps. Had 86 as the LOLB. He had his hand in the ground as a left defensive end nine times.

– Despite being on the field for just 58 snaps, Arthur Moats dropped into coverage 10 times. That’s 17.2% of the time. And he still managed to get a ton of pressure. Really nice preseason.

He played both spots pretty evenly. 42 on the left, 54 on the right.

– Williams was blitzed, by himself or in tandem, nine times.

– Artie Burns finishes his preseason with 45 snaps, of course, all coming in the finale.

– William Gay and Ross Cockrell played all but one of their snaps at left and right corner, respectively.

– A defensive back blitzed 18 times. Davis was sent on four of those.

– DB target stats, which I get a little more lenient on every year to improve sample size.