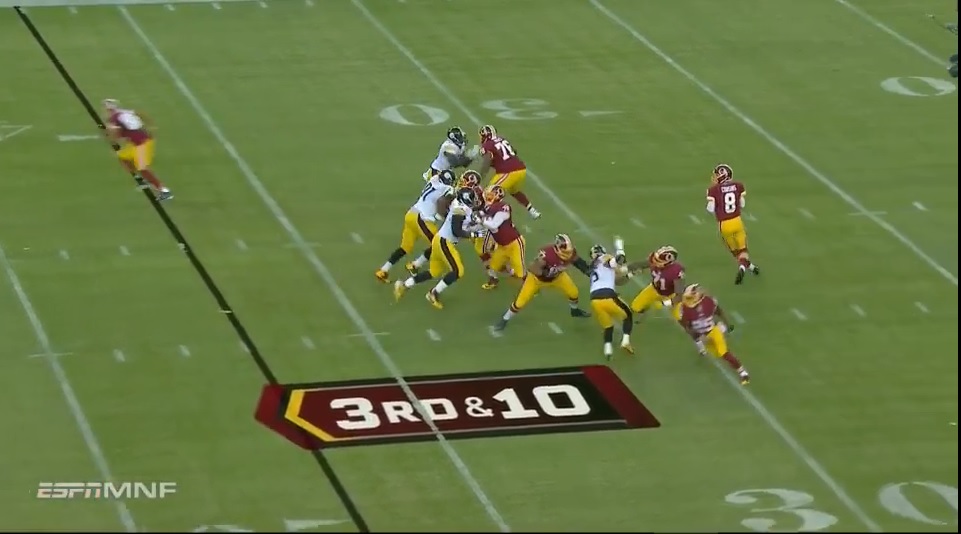 It’s hard to be too terribly critical in a 38-16 victory where the Pittsburgh Steelers controlled the game for three quarters. But if there is one glaring issue, it was the complete invisibility of a pass rush. Kirk Cousins’ jersey probably doesn’t even need washed after last night, not sacked once on his 44 dropbacks.

That’s uncharacteristic for the Steelers’ defense ideologically, but has become more common in recent years as the dominant edge players have disappeared. Since 2010, opposing offenses have attempted at least 40 passes in 34 games. The Steelers have at least one sack in 30 of those but two of their sackless performances have come in the past two seasons: last night and a 2015 loss to the Oakland Raiders.

Per ESPN, the defense registerd just two quarterback hits. One by L.J. Fort, another by Stephon Tuitt. Jarvis Jones, James Harrison, and Arthur Moats were completely shut out.

But you don’t need to hear the criticism from me. Players and coaches realize they have to get better.

“Our pass rush sucked today,” Cam Heyward told reporters after the game. “Falls on me and goes all the way down. Not looking to make excuses, I gotta be better.”

In today’s press conference, Mike Tomlin concurred with that sentiment.

It’s a reminder of arguably the largest issue facing this team. An edge rush was spotty last season and may be full-blown anemic without Bud Dupree for the first seven games.

Otherwise, as we’ve pointed out before, Keith Butler is going to be obligated to blitz – something he opted against last night – to generate pressure. The Steelers will face quarterbacks much better than Cousins, ones who are able to routinely pick defenses apart that send just three or can’t get pressure with their four man rush.

They’ll look to bounce back against a normally good Cincinnati Bengals offensive line that gave up a whopping seven sacks to the New York Jets, the most they’ve allowed since 2008. Left tackle Andrew Whitworth should be tough but the rest of the Bengals line has struggled.