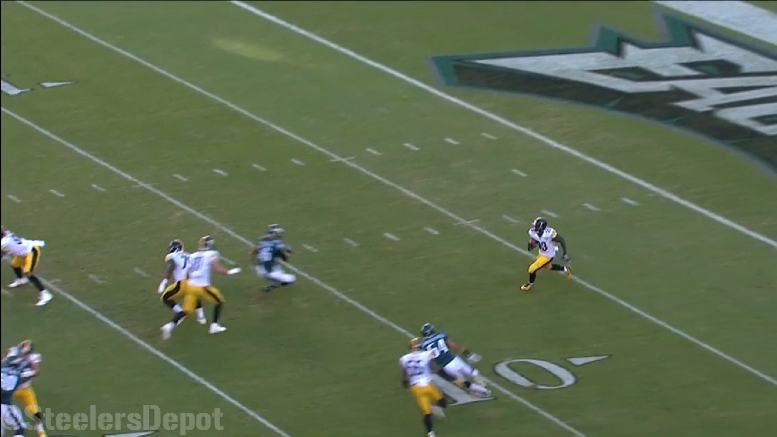 As I wrote yesterday morning, the Pittsburgh Steelers at least have to look forward to the fact that the next time the offense that scored three points in Philadelphia takes the field, it will have All-Pro running back Le’Veon Bell on it. But while he was already back on the practice field yesterday, the team still has a few days due to a roster exemption to make a move.

Although Daryl Richardson was the only one of the two backups to see time on offense against the Eagles—he did get one carry, for one yard—Fitzgerald Toussaint still figures to be the one whose roster spot is safe.

Toussaint serves as the team’s up back on kick returns, and plays more special teams units than does Richardson. He also has five total touches on offense over the course of the first three games, versus the two that Richardson has—which says how little that the Steelers have utilized their backup running backs with DeAngelo Williams in the starting lineup.

Both Richardson and Toussaint provided an intriguing preseason battle in order to determine who would serve as Williams’ backup—and the likely player to remain on the 53-man roster—during Bell’s three-game suspension, but, unsurprisingly, that turned out largely to be a moot point when you consider that they combined for just barely over two touches per game in that span.

Both players, to be clear, are eligible to be placed on the practice squad, assuming that they are able to clear waivers, which will in all likelihood not be a concern. They are both third-year players, and teams are permitted to have up to four third-year players on the practice squad with two accrued seasons, provided that they maintain a full roster, which is virtually always the case.

Toussaint spent most of the 2015 season on the Steelers’ practice squad, where he was, for all intents and purposes, the fourth running back on the depth chart, before he was promoted to the 53-man roster late in the season, and after a couple of more games, he ended up as the backup to Williams, and then found himself starting in the postseason due to injury.

It appears likely that he will remain as the Steelers’ third running back, but he probably will not see any snaps on offense for a good long while unless there is an injury. Provided that Bell and Williams are both healthy, Toussaint’s role will be exclusive to his special-teams duties, where he has shown himself to be a positive contributor since being signed to the practice squad after he was waived by the Ravens in the final wave of roster cuts last year.