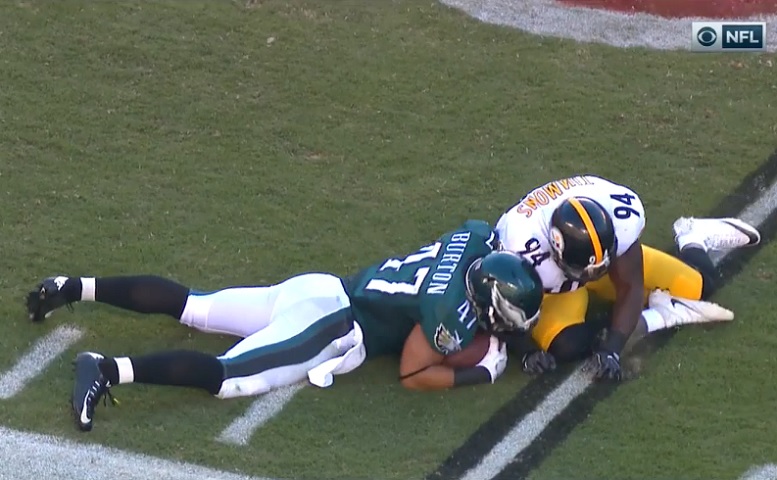 The first quarter late hit by Pittsburgh Steelers linebacker Lawrence Timmons in the Week 3 Sunday game against the Philadelphia Eagles was costly in more ways than one. Not only did it keep the Eagles second offensive possession of the game alive, it also reportedly cost Timmons a chunk of his weekly pay.

According to Ray Fittipaldo of the Pittsburgh Post-Gazette, Timmons was fined $9,115 by the NFL for his late hit in the Eagles game.

Lawrence Timmons fined $9,115 for his late hit in the Eagles game.

On the play in question, Timmons hit Eagles tight end Trey Burton late on the right sideline after he had made a 3-yard catch and had already been taken to the ground by Steelers cornerback William Gay. It was an egregious mistake on the part of Timmons, who was penalized 15 yards for his hit for unnecessary roughness.

Had Timmons not delivered a late hit on Burton, the Eagles would have then faced a 3rd and 10 on their own 18-yard-line. Instead, their offense took advantage of the penalty by subsequently finishing the drive with a touchdown to take a 10-0 lead.

While I didn’t research it thoroughly, I think this is the first time that Timmons has been fined since 2012 when he was docked $21,000 for his helmet-to-helmet hit on then-New York Jets quarterback Mark Sanchez during a Week 2 road game.