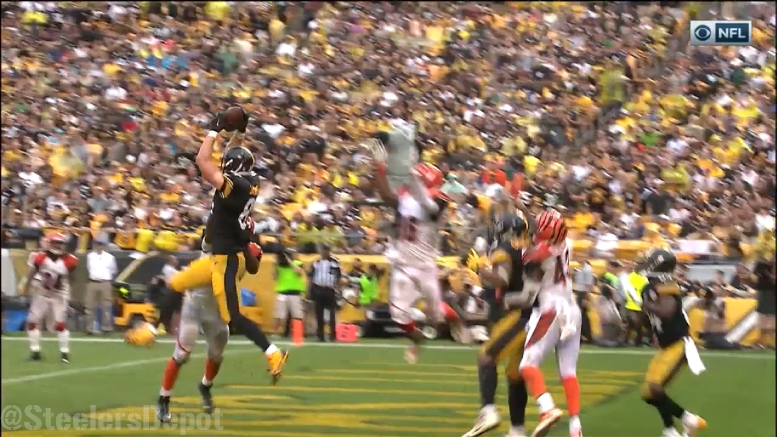 Somehow is feels like more, but Pittsburgh Steelers current starting tight end Jesse James caught three passes for 29 yards yesterday against the Bengals. The impact of his three catches certainly felt as though it were more significant, yet only one of them even came on second down. He was also targeted twice on passes that he did not catch, which were also on first down.

James’ first target came about midway into the first quarter, approaching midfield, on first down. The offense spread out five wide with 11 personnel on the field, James the interior left wide receiver, but Ben Roethlisberger was under pressure and threw the ball away, well over his head and out of bounds.

Roethlisberger looked in his direction again on second and 10, but this time connected, from the far hash mark, with James set in a blocking stance. But the tight end ran a flat route before turning upfield after reading his quarterback, and Roethlisberger let the pass go even though James looked to be covered well. The second-year player hauled it in, going up for the 11-yard grab.

It was early in the second quarter when he got his number called a second time, coming up with a nine-yard grab. The Steelers ran out of a blocking formation with two tight ends to the right in three-point stances, James on the outside shaded off the line. Although he could have rolled after the reception pulled him to the ground for more yardage, credit is due for staying composed and making the grab in the first place.

Roethlisberger got back to his tight end about a quarter and a half later, with about half of the third quarter having wound down and the Steelers setting up for first and goal from the nine-yard line following a big 53-yard play on the snap before.

The Steelers brought a 12 look onto the field, but lined up both tight ends standing in wide-receiver stances to the right of the formation, with James as the middle of three receivers in a five-wide overall look and a 2×3 split.

With the Bengals playing in a zone, James split through the two shallow linebackers in coverage at about the five-yard line before bending more sharply toward the back of the end zone, with the far linebacker late in carrying him. Roethlisberger threw the ball high so that the 6’7” tight end could make use of his height advantage in snaring the nine-yard touchdown, the second of his career.

James’ final target came on a first-down play late in the third quarter. With Roethlisberger under duress and looking to extend the play, the tight end started to work back to the ball when the quarterback let it go, but the pass was high and off the fingertips of a leaping effort.

So far through two games, James has at the very least been a solid receiving option, catching eight passes for 60 yards and a touchdown. You would like to see his YAC and yards per catch improve, but it is a good start for the 22-year-old.