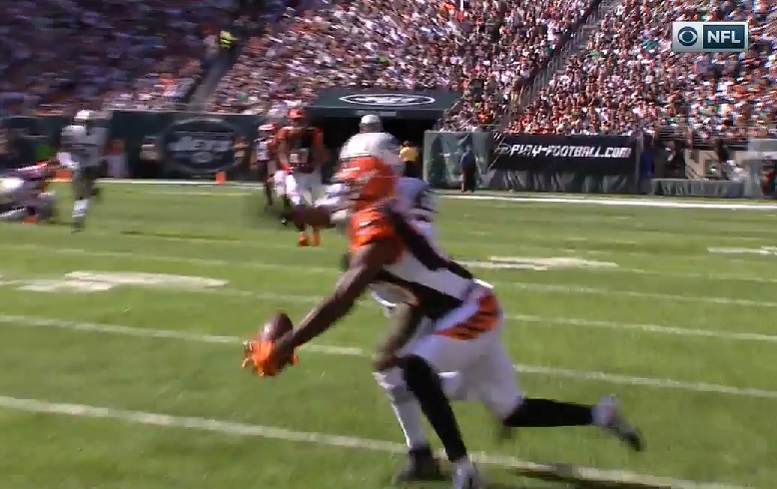 If you watched the Cincinnati Bengals win over the New York Jets last Sunday, or at the very least saw the highlights from the game, you saw quarterback Andy Dalton complete quite a few deep balls during the contest. In fact, Dalton completed four of the five deep passes in the game that he threw 20 or more yards past the line of scrimmage for 189 yards and a touchdown. The lone incompletion also resulted in a pass interference call. Those four deep pass completions were 51.6% of the total passing yardage Dalton had against the Jets and on top of that, three of those four different drives that included those deep completions resulted in 17 offensive points for the Bengals offense, who scored a total of 23 for the game.

Dalton’s first deep completion against the Jets came on a 2nd and 4 play from the Bengals own 26-yard-line with 3:06 left in the first quarter. On this play, the Jets disguised an inverted Cover 2 as cornerback Marcus Williams dropped deep into a shell coverage on the left side of the defense with help underneath. Bengals tight end C.J.Uzomah split the Jets two underneath defenders on that side of the field and then carried his route up the seam. After a short drop back, Dalton hit Uzomah in stride over the top of the trailing linebacker and just in front of Williams. This was an excellent throw by Dalton and Uzomah gained a chunk of yardage after the catch.

With 11:31 left in the first half, Dalton struck deep again on a 1st and 10 play from the Bengals 46-yard-line. This time, however, Dalton hit Green on a deep post route for a touchdown after the Bengals wide receiver had blown past Jets cornerback Darrelle Revis. After the game was over, Revis called this a busted coverage and that’s likely because he was expecting to have help from the safety in the middle zone of the Jets Cover-3 defense. The safety, Marcus Gilchrist, was too concerned with crossing over route in the middle of the field after Dalton carried out his play action to the running back and as a result, Green had an open middle zone to exploit.

What a mess for the Jets defense on this play in addition to some great recognition by Dalton. This was a 3rd and 18 play from the Bengals own 29-yard-line for starters and as you can see, the Jets defense isn’t lined up at the snap of the football. With no safeties deep, Dalton decides to take a deep shot to wide receiver Brandon LaFell, who had managed to get a step on Williams to the outside. Considering the down and distance, Dalton had nothing to lose on this play by going deep and it ultimately paid off for him. Throw it deep and hope for the best with no pass rush to deal with.

Dalton’s final deep pass completion that he threw more than 20-yards past the line of scrimmage against the Jets went to Green with 7:18 left in the third quarter. On this 1st and 10 run-pass option play from the Bengals 8-yard-line, the Jets appear to be playing cover-1 with Revis playing press against Green on the far side. At the snap of the football, Green starts inside before quickly breaking outside of Revis, who was then forced to recover from being turned around. After a quick play action, Dalton fires the ball deep down the far sideline and Green makes a fantastic catch on the other end. (see picture above)

Against the Pittsburgh Steelers on Sunday at Heinz Field, expect Dalton to go deep several times during the game and especially down the middle of the field when the Pittsburgh defense is playing Cover-3 and zone underneath. If Dalton is allowed to connect on several of his deep pass attempts during the game, the Steelers better hope their offense is able to hit the 30-point mark if they hope to win the game.