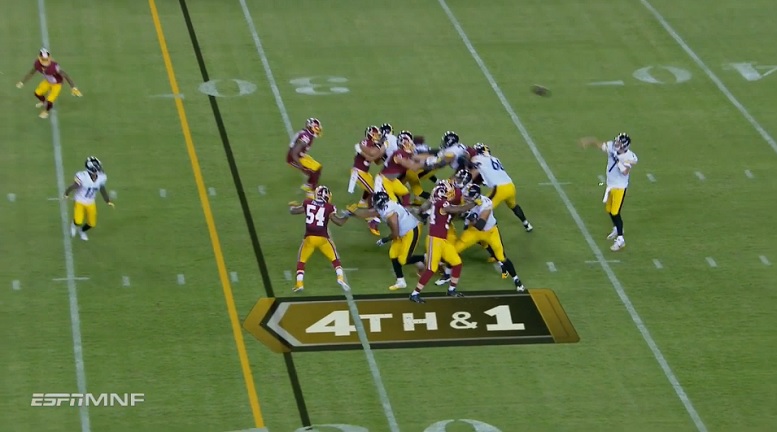 Even though the play resulted in a touchdown, there’s still quite a bit of talk and consternation about Pittsburgh Steelers quarterback Ben Roethlisberger throwing deep to wide receiver Antonio Brown on 4th and 1 from the Washington Redskins 29-yard-line with 10:10 remaining in the first half of Monday night’s regular season opener.

While Roethlisberger did have two other open wide receivers to throw to on the play in question, it really was quite evident when you watch the replay from all angles that his mind was made up to throw to Brown after carrying out play action.

Regardless of what anyone thinks about Roethlisberger’s decision to throw deep Monday night on fourth and short, it really shouldn’t have come as a huge surprise. In fact, when it comes to him making such throws, his recent history suggest that it was definitely worth a shot and especially when you consider who he was throwing to on that particular play Monday night.

Dating back to 2012, Roethlisberger entered Monday night’s game having completed 9 of his 12 deep pass attempts (16+ yards past LOS) for 342 yards and 2 touchdowns on 3rd or 4th down plays with 2 or less yards to go. While current NFL starting quarterbacks Aaron Rodgers and Jay Cutler had both attempted a few more such passes in those same short-yardage situations than Roethlisberger had dating back to 2012 and entering the 2016 regular season, their respective completion percentages of 46.7 and 46.2 pale in comparison to that of the Steelers quarterback. (75%).

The fact that Roethlisberger had only attempted 12 such deep throws on 3rd or 4th downs with two or less yards to go since 2012 is honestly number I expected to be a bit higher before starting my research of the stat. That works out to an average of three times per season. In other words, if you had a problem with his decision to go deep Monday night on 4th and 1, I doubt you’ll have to worry about him doing it too many more times the remainder of the 2016 season.

Quite honestly, fans and analysts should probably be more concerned when Roethlisberger goes deep on 3rd or 4th downs when needing 3 or 4 yards for a first down. Dating back to 2012 and through the 2015 regular season, Roethlisberger had completed just 7 of 21 deep passes for 239 yards and a touchdown when facing those distances and downs. By the way, he was second only to Drew Brees in deep pass attempts on those downs and distances dating back to 2012 and through the 2015 regular season. With that said, Roethlisberger threw deep on 3rd and 3 three times Monday night against the Redskins and he completed two of those passes to Brown for gains of 26 and 16 yards. His lone incompletion was to tight end Jesse James and was a low throw and one I’m sure he wishes he could take back.

Was Monday night’s deep 4th and 1 throw to Brown a high percentage one on paper? No, but when it comes to Roethlisberger, it was in his mind and especially being as he was throwing to Brown.