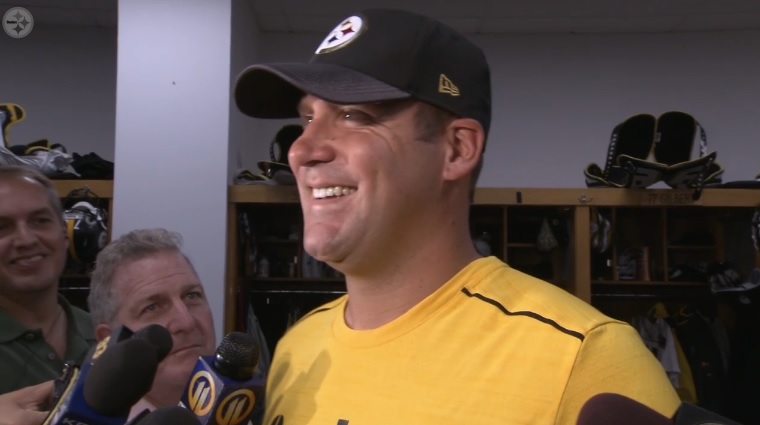 We’ve seen Ben Roethlisberger grow as a person, as a quarterback, and as a leader. The latter was on display Sunday afternoon, a day where the offense sputtered and stalled, did just enough to walk away with a victory.

With Antonio Brown blanketed, Roethlisberger had to rely on the rest of his supporting cast. That centered around Sammie Coates. Roethlisberger told reporters that at halftime, he pulled Coates aside and asked him to step up.

“I just had a talk with him and told him he’s gotta step up and make a play and he did,” he said via Steelers.com. “I’m happy for him for doing that.”

That came on the heels of poor effort twice on the final drive of the first half, with Coates slowing up on his route, and eventually leading to an interception the Bengals would get three points out of.

But Roethlisberger looked Coates’ way twice on the first two possessions of the second half. The first fell incomplete but the second resulted in a 53 yard pickup. The Steelers would score on the next play.

It was the second chunk play the pair would have on the day. In the first half, Ben found him on a scramble drill for a 44 yard pickup.

“We try and practice things like that in practice, those scramble drill type things. I thought he did a great job. There was no hesitation, I kinda pointed for him to go deep and he took off right away and made a great play. That’s some really good positive stuff that you see from a young guy that hasn’t had a lot of experience and playtime with me.”

Now, with Markus Wheaton’s presumed return, the Steelers will be fully healthy at the position for the first time this year. Only Brown has his role locked up. The rest will have to battle for snaps, not that it’s a bad problem to have.

“It’s good for them. It’s competition. I think Sammie has to do everything he can to try and keep Markus from taking his spot. And Hey-Bay, and all those guys. If they can play well enough to keep those other guys off the field, that should be their goal.”

And that goal, when there is a rotation, is to make it feel like it’s the same group of players on the field.

“For me, their goal, when they’re out there, I shouldn’t know who’s out there. It should be a constant flow of who’s going. I got faith in them, they have faith in me that we can get it done.”