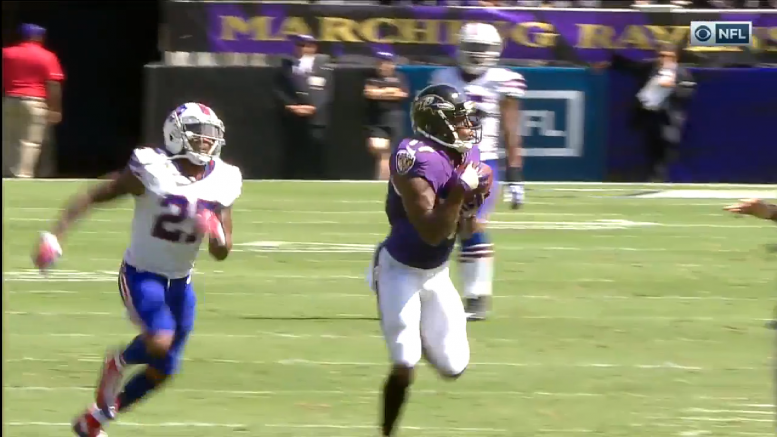 Over the course of his four-year tenure with the Pittsburgh Steelers, former third-round wide receiver Mike Wallace drew a reputation of big a big-play threat whenever he was on the field, yet he also became known as a result as a one-dimensional player, with even his head coach, Mike Tomlin, calling him a “one-trick pony”.

It was a pretty nifty trick, it must be acknowledged. In four seasons, he caught 27 passes that went for at least 40 yards, totaling 1407 yards and 16 touchdowns, courtesy of Pro Football Reference’s indispensable searchable play database. That works out to an average of about seven of what Dave Bryan calls ‘double-explosive’ plays and four touchdowns on said plays per season.

Four of those plays went for over 60 yards, while 17 went for at least 50 yards. His 27 receptions of 40 yards or more was 22 more than anybody else on the Steelers, and two more than DeSean Jackson’s 25 that he had in the same span. Only four players had at least 20 such receptions from 2009 to 2012.

Wallace did not fare so well when he decided to cash in in free agency. Check that, he fared very well, financially speaking, but his on-field performance waned as he found he was no longer playing with the sort of talent at quarterback that could make the most use out of his primary skill set.

In his three seasons since he left the Steelers, from 2013 to 2015, in two seasons with the Dolphins and then one with the Vikings last year, Wallace had just seven total receptions that went for at least 40 yards, with only one of them resulting in a touchdown. He totaled 345 yards on those seven receptions.

On Sunday, in his first game with his fourth team in the past five seasons, Wallace caught his longest pass since he was with the Steelers, a 66-yarder from Baltimore Ravens quarterback Joe Flacco that served as the only touchdown of the game for the Ravens, and proved to be the ‘game-winning’ score, though it came in the second quarter.

Wallace caught three passes in all during the game for 91 yards, which was 52 yards more than any other player on the Ravens had through the air. Steve Smith in his first game back caught five passes, but they yielded just 19 yards.

After the former Steelers Pro Bowler signed with the Ravens, he seemed to take a parting shot at the previous quarterbacks that he played with while with the Dolphins and Vikings, talking about how good it was to play with a quarterback who has a big arm the way Flacco does, as he was used to while playing with Ben Roethlisberger.

He received backlash from that, of course, and was criticized while seeming to ignore what was assumed to be his own regression contributing to his struggles. But he let stand the 66-yard touchdown a proof of concept that he is back to his old ways, believing that he is in a system that can get him the ball where he wants it.