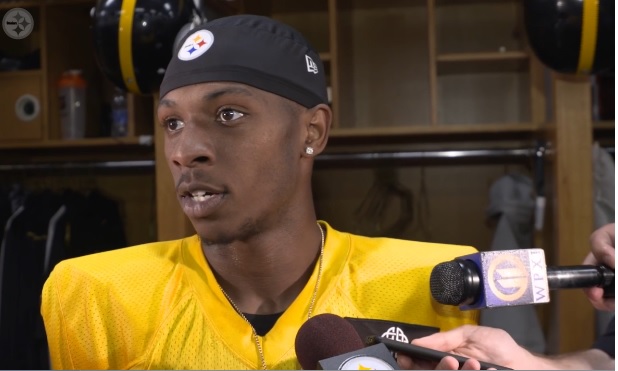 Justin Gilbert basically found out about his new home at the same time the rest of the world did. Speaking to the media for the first time today since being traded, Gilbert told reporters he didn’t find out about the trade until Saturday.

But that doesn’t make him any less excited to come to Pittsburgh and the chance for a fresh start.

Gilbert quickly fell out of favor in Cleveland, an eighth overall pick who struggled mightily in 2014 and played just 50 snaps on defense last season. To him, consistency was the biggest hurdle.

“Just continue to be consistent. Continue to show I’m here every day to work and just show consistency.”

Off the field issues, being late to meetings, poor attention to detail, and a general lack of professionalism is tied to Gilbert’s persona. And one he is working to change.

“Just growing up off of the field. There’s a lot of things that can distract when you come in fresh out of college bu after a year in the league and not getting done what I want to get done my first season, it’s kinda changed me and made me a new man.”

To his credit, he’s at least sounding like a Steeler. Asked about playing time and his role in the Steelers’ defense, Gilbert deflected, and focused on helping the team win.

“I just want to finish out the year here. Make it to the playoffs and get to a Super Bowl. If I’m playing good, I’ll be out there. If I’m not, then I probably won’t.”

He’ll likely begin the year as a backup but potentially the first man up at corneback, vying with Artie Burns for that spot. The Steelers currently have him listed as the #2 KR but his experience in Cleveland – the only strength he repeatedly showed – suggests he’ll quickly become a starter.

But begin a starter there means earning the trust of the coaching staff. And that is something he’s arguably never earned in his NFL career. If he can do that, then the Steelers will have a chance to reverse his fortunes.