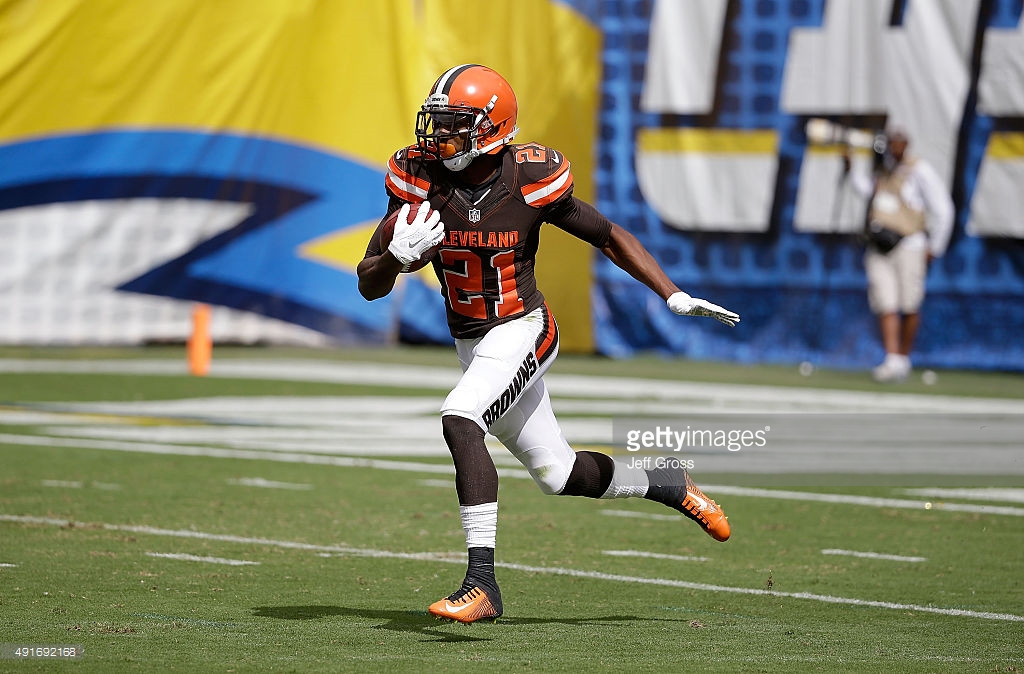 This would qualify as football’s version of a spit take. Color me shocked when I saw the news come in the Pittsburgh Steelers traded for Justin Gilbert. A move I, and I’m sure you felt the same, did not expect. Lot to take in, even realizing this is a player who – at best – will have a marginal impact in 2016. But with his name, and the Twilight Zone feeling of the Steelers taking the Cleveland Browns’ castaways, it’s certainly creating a lot of discussion.

Deep breaths. Let’s look at the good, the bad, and the ugly of Justin Gilbert.

That generally gels with the criteria I set for FA cornerbacks and ones they draft. In the latter, Gilbert checks every box but the 4.25 short shuttle benchmark.

As this 2014 NFL.com article reported, the Steelers would’ve taken Gilbert with the 15th overall pick had he fallen. He didn’t, going 8th, and the Steelers took Ryan Shazier. Hooray for that.

As the Steelers gravitate towards size, Gilbert certainly offers it. 6’0, 200 pounds, and 33 1/8 inch arms. That is comparable to Artie Burns, who checks in at 5’11/7, 193 and 33 1/4 inch arms. It’s a small sample size but could speak to the Steelers future draft plans and shift in philosophy.

You can see that length show up in the preseason tape from this season. Watch him hold his ground and break up this 3rd and 3 slant against Tampa Bay this preseason.

Or this skinny post the week before. He’s a fluid player who can play the pocket.

His special teams value is going to be the biggest short-term impact, playing 151 snaps last season. That’s good for a team with a questionable Shamarko Thomas and, as of this writing, without Doran Grant. So adding another special teamer for the outside is helpful. And sub 4.4 speed does too when you’re looking for players who can cover a lot of ground in a hurry with the length and size to stay clean and not get bodied around.

Of course, his return value is the most visceral impact of his special teams ability. Last season, he averaged 28.3 yards per return, with five of them going for 30+ yards (that does take into account yards returned from out of the end zone, for the record).

Here’s one of his better returns, showing the speed to win the edge and get down the sideline.

While he is Cleveland’s hand-me-downs and was dealt by the new Hue Jackson and the Moneyball’s regime, most of his time spent with the Browns has been a mess organizationally.

His defensive coordinator in 2014-2015 was Jim O’Neil, arguably one of the worst in the game. Not only in tangible production, the Browns’ defense was plain bad across the board, but in scheme. Even the players openly talked about how O’Neil didn’t put them in positions to succeed.

Last October, Sports Illustrated’s Kevin Jones filed this article on the team’s defense, citing several players who weren’t happy with the style of defense O’Neil ran. A quote from the article.

“It’s a completely chaotic approach to stopping the run, and players have said—off the record—they’re spending way too much time thinking, and not nearly enough time reacting.”

That specifically mentions the Browns’ run defense but you can imagine the secondary had similar problems with their reads.

Keith Butler has run a more simplified defense, one that puts emphasis on his guys playing fast and not overanalyzing the situation. Culturally and schematically, Gilbert is in a better home.

He is surrounded by veteran talent in the secondary. William Gay and Mike Mitchell, two incredibly hard workers whose careers didn’t have the greatest start – Gay, a 5th round pick and scapegoat early on, Mitchell flaming out in Oakland as a 2nd round pick – highlight the group. Robert Golden has taken the “work your way up from the unknown” path, making the team, earning a hat on special teams, and then expanding his role on defense. There are role models on this team, stories Gilbert can identify with.

If there’s a group who can get him on the right path, and that’s no guarantee, it is this one.

Gilbert will have a lot of the pressure off him in this second go-around. He won’t be the #8 overall pick. He’ll be just a dude, trying to get a hat on gameday, working his way up the ladder. That will hopefully serve as motivation as well as a reality check. Hopefully. It sounds nice in my mind, at least.

Those first two questions are critical to his success but ones I can’t answer. I can give you a better idea to that third one. And the answer is…not really.

Gilbert’s run defense looks poor and given his background, it’s fair to ask if he really takes pride in it.

Let’s go back to the Atlanta Falcons preseason game. Edge defender as the back bounces this run. Gilbert whiffs on it, the back running through him, and into the end zone. He is wearing #21.

He seems easy to stalk block, receivers sticking to him in the run game. Watch him get controlled and then pushed off to the sideline on this play. Bottom of your screen.

In 413 career regular season defensive snaps, Gilbert has three tackles against the run.

Despite the physical tools, he’s had a lot of trouble seeing the field in a Browns’ secondary that was starved for talent. Just 50 defensive snaps last season, only playing at least 20 in a game one time.

His angles aren’t great and he’ll have some trouble closing on the football in off coverage. Ugly missed tackle in 2015 against the Cincinnati Bengals, leading to a A.J. Green 22 yard gain. It was called back on review, the receiver ruled down by contact, but this is not a positive play by any means.

His technique needs a lot of work. With his size, he may appear to be an attractive player in press, but the tape doesn’t suggest it.

Mike Evans burned him deep down the right sideline in the third preseason game against the Tampa Bay Buccaneers. Check it out.

Gilbert tries to get in a strong punch off the line but, and I checked with a good football buddy of mine, his technique is poor. As he punches with his right hand, he fails to bring his right foot, losing power and the ability to mirror Evans’ outside release. His base narrows, he gets uprighted, and opens his hips, letting Evans win off the line with relative ease.

But Gilbert should have the physical tools to recover. Instead of working to get back in-phase, he claws at Evans’ shoulder pad, trying to slow him up. Not only is he risking a penalty, he is slowing himself down with all the wasted motion in his arms.

Evans runs a 4.5, Gilbert a 4.35, and is more than 20 pounds lighter. No way Evans should smoke him like this. But when you have bad technique, no amount of physical skills will mask it. Not at this level.

While Gilbert’s return value is attractive, and likely one of the reasons why the team was interested, if my study is worth anything, it says a strong kickoff returner isn’t really necessary. A luxury, at best.

Sticking to a football sense, Gilbert was made inactive in December of his rookie year after being late to at least one meeting.

Missed meetings, according to Gilbert, is a common theme.

#Browns Justin Gilbert admitted he "missed a ton of meetings last year." Why? "hard sleeper". nothing deeper than that? "no"

“Two prominent Browns defensive players recently read a transcript of Gilbert’s graceless and unprofessional interview with reporters this fall about his promotion to kick returner and complained directly to me.

“He just doesn’t get what the NFL is about. At all,” said one veteran. “How could they miss this badly?” said another about the front office.”

“There might not be anybody in the NFL who cares less about football than Gilbert.”

“Gilbert is usually by himself, sometimes even leaving the facility during the free hour period before practice. Team good guy Joe Haden attempted to mentor Gilbert this offseason by working out with him in Miami, but Gilbert continued to push away veterans looking to help guide him in Cleveland. He’s isolated himself from the team.”

“The cornerback missed the mandatory team bus at 10:30 a.m. and had to be frantically located by the Browns security team. Gilbert showed up shortly after noon. One teammate nearly had to be restrained, his anger bubbling as Gilbert stood there smiling, eating candy.”

As we linked to yesterday, Jason La Canfora reported that in one instance, Gilbert didn’t show up to the stadium on gameday until 11:45 AM. Kickoff was set for one.

I don’t know Gilbert. Maybe he’s gotten a bad reputation and people are piling on. But I’ve also heard first-hand accounts of people dealing with him and the stories aren’t any prettier.

Away from football, he was cited for “failure to control his vehicle” stemming from a road rage incident that caused Gilbert to crash his car in September of last year.

In that sense, there is the risk for not only a bad decision but active harm to the team. A distraction, an annoyance, frustration from the rest of the group doing the right thing and what is required of them by the coaching staff.

I’m usually pretty jumbled up trying to figure out what the heck do I think initially. The compensation isn’t much, a 6th round pick two years from now, so from that standpoint, it’s a pretty low-investment move. Can totally understand the Steelers going for it given how much they apparently liked him just two drafts ago.

But don’t expect Gilbert to ever become much of anything on defense. His technique is a mess, his run defense doesn’t mesh with what the Steelers usually like, and Pittsburgh isn’t exactly Mecca for evaluating and molding defensive backs.

What you can reasonably expect from his is a decent special teamer and splashy return guy.

It’s the new Allen Rossum deal. Richer in the cost, Rossum fetched just a 7th, and richer in the talent because Gilbert still has that flicker of hope of being something on defense. But I’m not exactly betting my house on him ever being a defensive contributor to an even remotely significant degree.