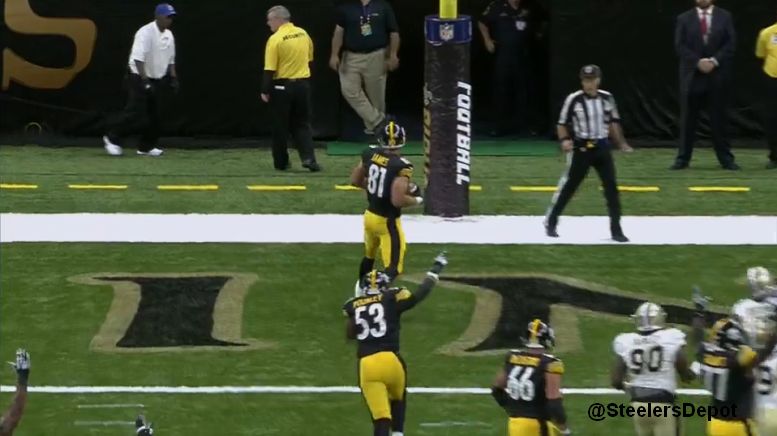 Momentum is a key ingredient when discussing championship-caliper teams, regardless of the sport. Teams that limp into the playoffs, usually don’t fare very well; conversely, teams that pick up steam at just the right time, usually experience quite a bit of success. But what about capturing and harnessing momentum in a game? Pittsburgh Steelers fans are well aware of the team’s success when deploying their no-huddle offense, or lightning package.

What began as a scheme to protect Ben Roethlisberger from getting pummeled years ago, has become a beautifully crafted methodical form of offensive assertion. Taking a look at some 2015 numbers, we see why exactly Todd Haley was so keen on stressing a rhythm with this no-huddle.

Although last year did come with its ups and downs, the offensive line did experience a few injuries that were detrimental to their chemistry and ability; Ben had the 3rd least amount of time per play in the NFL until he scrambled. The offensive line gave up 24 sacks, slotting them at 10th most in the NFL, but Ben was only hit 21 times without being sacked, good for 8th best.

This all points toward a skewed praise for the offensive line, as they weren’t always as strong as they seemed. Thus, the lightning package gained momentum (or at least incorporated as an integral part of the offense), and now many are awaiting its presence and triumph for the upcoming season.

Todd Haley has crafted a rhythm that can hang with the best of them, and he wasted no time putting that on display during Friday night’s matchup with the New Orleans Saints. As we prepare ourselves for tonight’s roster battle and notes on the depth that exists behind the starters, let’s feast our eyes on some of the potential that the no-huddle offense can exhibit in 2016.

The first thing one notices when observing the no-huddle is Ben’s ability to diagnose and assess the defense- once an intelligent, veteran Quarterback is given the keys to move with the aforementioned momentum of the game, the possibilities are endless. Especially when the offense has the horsepower of a Bugatti Veyron, touting a set of offensive weapons that would make any franchise jealous.

Moreover, the defense is left scrambling to find not only their footing, but their mental direction as well. Mismatches begin to rear their head, and Ben & co. are left to feast, as defenses are unable to substitute because of the offense’s fast pace (pending their own use of substitutions, of course).

Take the example below: a key 3rd down conversion by rookie WR Eli Rogers. Ben rushes everyone to the line, and after a bit of defensive confusion, realizes that some of the corners are beginning to play a little soft- a natural product of the fast paced no-huddle, as defensive players know that even a momentary lapse could result in a big gain or a touchdown. After a slight notion to Rogers, Ben finds him in the slot for a perfect 10-yard curl; a play that would keep an eventual touchdown drive alive.

Another great example is showcased on the combination of two plays in the same drive. Below, we see a quick pass out to WR Antonio Brown for 8 yards.

Afterwards, Ben once again hurries his offense to the line; the defense, after being hit with quite a few fast-paced plays, begins to backtrack the second the ball is snapped. A screen to second year TE Jesse James yields a 1st down, charging behind a blockade of extremely large men.

The artwork to this craft is the offensive balance, a mind game, if you will. In addition to being gassed, the defense becomes weary of each play, especially when the ball’s being released in under two seconds. Ultimately, fans were left salivating; pondering the extremely high ceiling this offense has when clicking on all cylinders. If Friday night’s two opening drives were a taste of what’s to come, fans may be salivating enough to fill a pool by the end of the 2016 season.