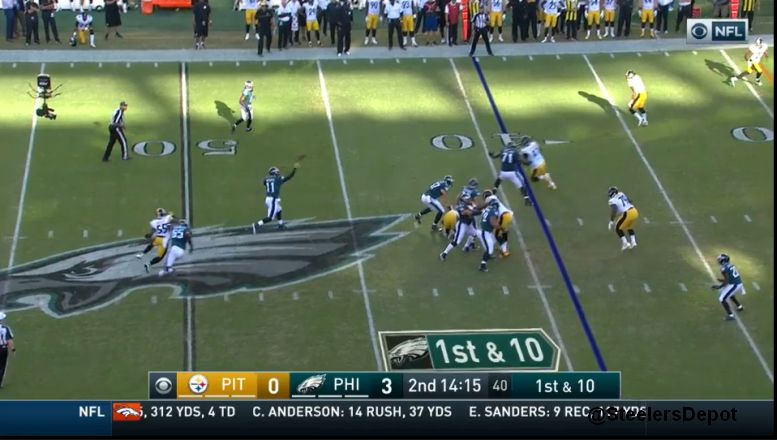 You can attack this from any angle that you want. No matter where you start, the Pittsburgh Steelers got their butts kicked yesterday. At this point, I don’t know if you are interested in the exact reasons or not or would just rather burn the tape and get ready for next week.

But if you are, there’s one place I’ll start. And you gotta tip your hat to the Philadelphia Eagles, centered around head coach Doug Pederson and offensive coordinator Frank Reich, for drawing up a gameplan that had the Steelers uncomfortable all game long.

They got chunk plays on this defense primarily by what they did pre-snap and the one or two seconds following the snap. The Eagles won the battle schematically, one of the numerous ways they outplayed the Steelers.

If you can stomach it, let’s take a look.

The first example comes on the first double-chunk play of the game, Darren Sproles’ 40 yard screen pass midway through the first quarter.

Philadelphia has a lot going on here off the snap. There’s three components here. 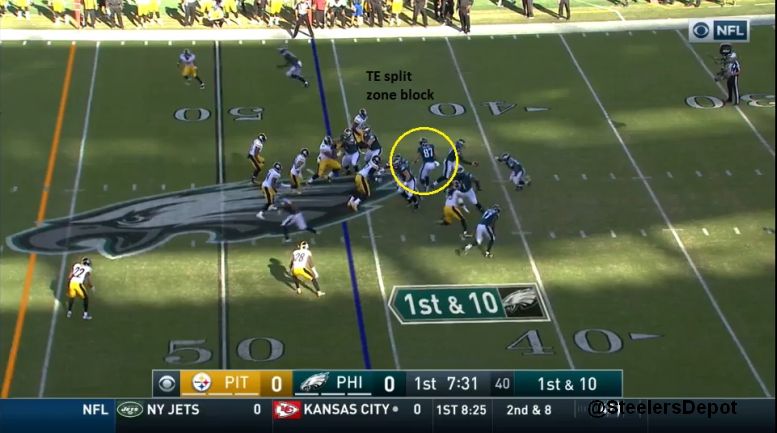 2. A fake end around to Nelson Agholor. 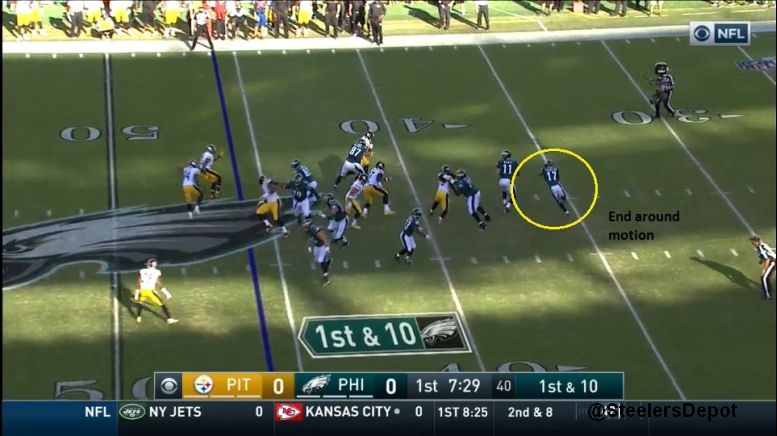 3. And then finally, the actual play, a left screen to Sproles. 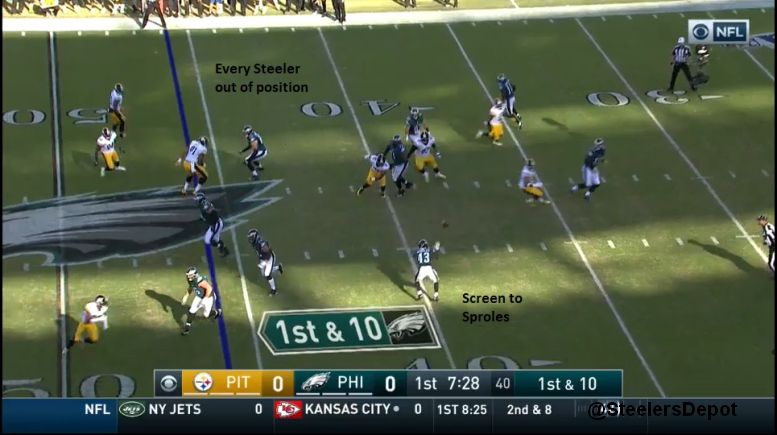 After the first two window dressings, the split zone and end around, basically all the Steelers have floated that way. There’s no one left to defend the screen, blockers in space, and a whole lot of green grass.

It isn’t until Robert Golden is able to shove him out of bounds 40 yards later that the Steelers finally end the play.

The next is actually an incompletion but still shows the effectiveness of how the Eagles won pre-snap. Another fake split zone/end around combo. This slows up the linebackers, forced to respect either possibility, and primarily ROLB Jarvis Jones. He takes on the split zone block, again, by tight end Brent Celek, by “wrong arming” it, dipping inside to avoid getting sealed. 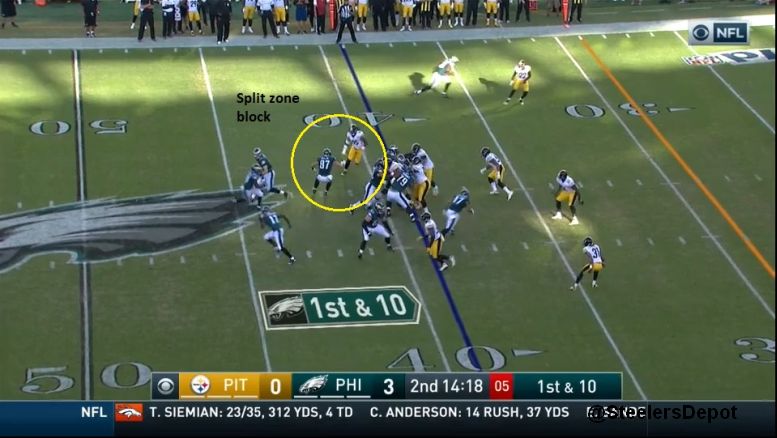 Of course, there is no actual run. But what this does is prevent Jones from getting any sort of pass rusher, now sealed inside, and ensuring Carson Wentz has a clean pocket. 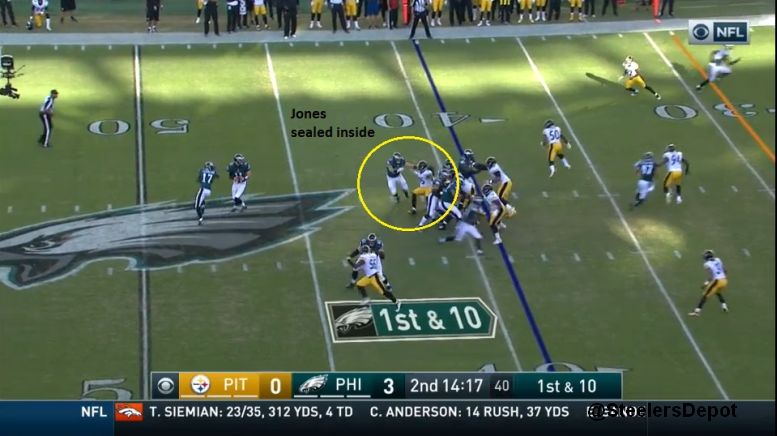 And seriously, it’s hard to have a bigger pocket than this.

Here are the Eagles again using the threat of an end around to hold and move defenders without actually having to block them. Fake the end around, hold the backside linebacker Anthony Chickillo, and it also slows up Ryan Shazier, who is sitting on the play more than usual because of the end around threat. 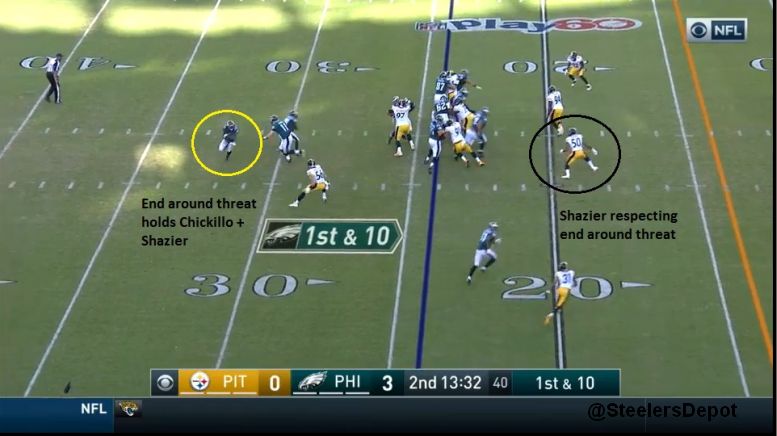 On zone runs, if you’re feet are “in cement,” if you’re not getting lateral and gaining ground, you’re screwed. And Shazier winds up being two or three steps slow as the back turns upfield for a nice gain. 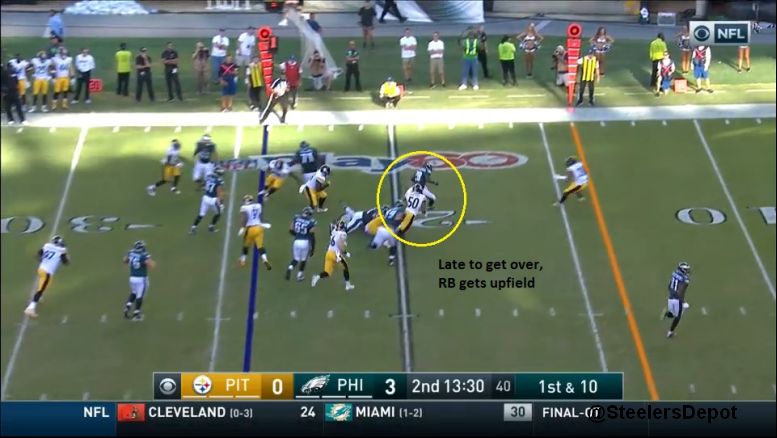 He’s barely blocked, able to duck around the block (maybe he should’ve gone over, not under) but it’s all created by that end around look.

And finally, one last look from the first half. A drive the Eagles don’t even come away with points but a critical third down conversion that kept the Steelers from getting the ball back with good field position and time before the half.

No end around this time. Wentz pump fakes the swing pass to the right, getting the defense, mainly Shazier, flowing that way. 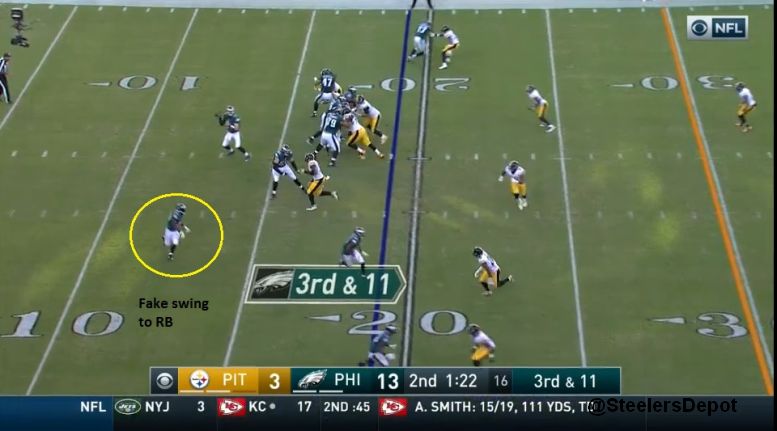 He then comes across the field to dump off a screen to Trey Burton. Like the Sproles’ screen, there’s nothing but green grass and blockers in front of him. Burton picks up the first down. 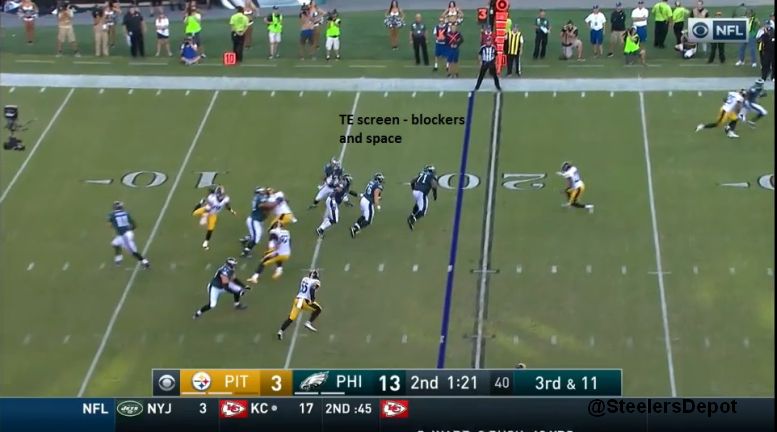 It’s obvious in basically any blowout to assume the losing side was outschemed and outcoached. Make no mistake, that definitely happened here, but if you’re yearning for specific examples or plain ‘ol validation of your anger, you found it.