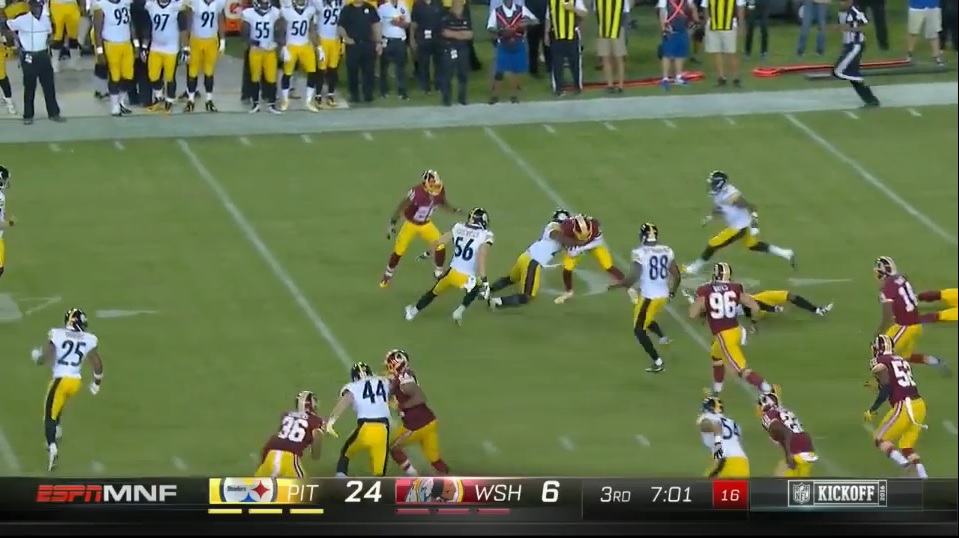 Shamarko Thomas’ career as a safety may not have gone as planned but he’s embraced the opportunity to be a core special teamer. And Danny Smith gushed about him in his sit down with Bob Labriola on Steelers Nation Radio.

“He’s excellent. First of all, it’s important to him. His work ethics are outstanding. He runs well, he understands it. He’s a physical guy and his effort is relentless. Those kind of guys are fun to work with. I expect big things out of Shamarko.”

Despite dealing with a groin injury suffered in the preseason, Thomas was a full-go for Monday’s opener, logging 15 special teams snaps. That was tied for third most on the team behind Anthony Chickillo’s 18 and L.J. Fort’s 16. Thomas was credited with a tackle on a night where the coverage team wasn’t very involved, facing only one punt and kick return.

Smith expanded on what he meant when he said Thomas “understands it.”

“There’s certain reads, tips, keys, what people are trying to do against you. You’re talking about him covering in particular. He and I go through those things week-to-week. He’s done a good job of that. Again, his work habits, his preparation. That’s the key. As he’s grown as a player, his preparation has grown.”

Thomas has taken all the best attributes he’s shown coming out of Syracuse, his fearless nature, a top-notch work ethic, and propelled them into being one of the Steelers’ top special teamers. Since last season, Thomas ranks second on the team in special teams tackles, according to Pro Football Reference, with eight. Only Vince Williams’ nine ranks ahead of him.

With all the turnover the team went through in the offseason, the list of names we’ve oft-repeated, keeping Thomas around offers consistency and continuity. If the Steelers’ special teams unit can play the way they did Monday, they’ll keep almost every game competitive and momentum shifts to a minimum.