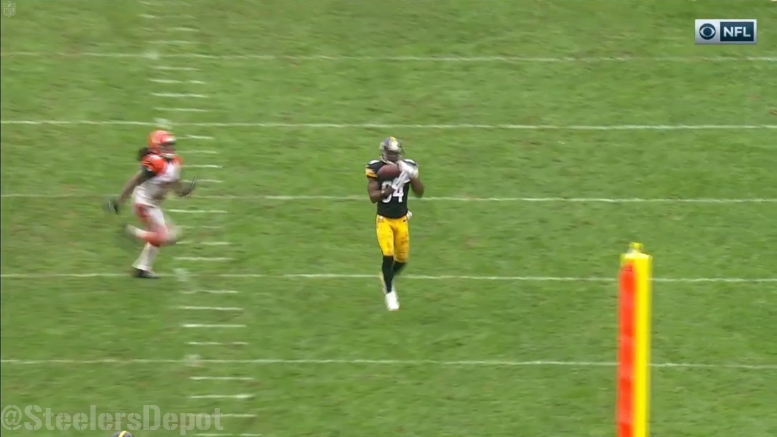 During the Pittsburgh Steelers’ season-opening victory over Washington, All-Pro wide receiver Antonio Brown was instrumental in the 38-point effort, leading the team with eight receptions for 126 yards and two touchdowns, both of which were produced on explosive plays in unconventional circumstances with respect to down and distance.

Today, however, he was not much of a presence at all, in what has been perhaps his worst game under normal circumstances in the past few years. Both he and Ben Roethlisberger were fully healthy. The last game of this nature came last year when Roethlisberger was just returning from a knee injury that kept him out for four games.

Yet he caught just four passes on the day for a total of 39 yards, which accounted for 21 percent of Roethlisberger’s completions and just 15 percent of his passing yardage. He was not the recipient on any of the quarterback’s three touchdown passes on the day, but he was the target on one of his interceptions.

In fact, his biggest, and most notable play on the day was likely a key third-down drop in the first half. Brown was targeted by Roethlisberger at least 10 times by my early preliminary count, meaning that the connection between the two star players was decidedly off on the day.

The Steelers received the ball near midfield in the middle of the second quarter, carrying at the time a 7-3 lead, when two running plays yielded no yards. On third down, Roethlisberger received the low snap and stumbled to the ground, while Jesse James was beaten around the right side.

But Roethlisberger got up and was able to fire off a pass to the wide open Brown down the field, who allowed the ball to bounce right off his chest as he seemed to be preparing to turn and run upfield before he managed to secure the ball.

The Steelers were forced to punt, and while the defense came up with a three-and-out with the Bengals on their own three-yard line, setting up Pittsburgh’s offense with another short field that they were able this time around to convert into a 49-yard field goal, that play loomed large as symbolic of the issues the offense was having throughout the day.

It is somewhat surprising that the Steelers did manage to score 24 points on the day, including three touchdowns from Roethlisberger to three different tight ends and running backs, but it is not often that they have a good offensive day when Brown does not.

The All-Pro went over two years catching at least five passes for at least 50 yards in every game, but he failed to reach either mark in just the second game of this season. While I do not anticipate that that will develop into any kind of meaningful trend, however, it is hard to talk about this game without talking about the rough day for Brown, in spite of the fact that two of his completions went for over 15 yards and converted third downs.