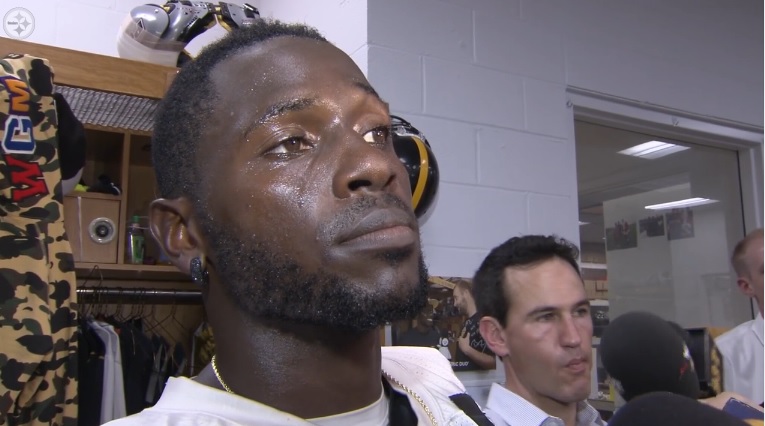 That’s what he told reporters earlier this week in the showdown between two of the best in the game – Antonio Brown and Josh Norman.

“I think the big thing for both of them is that they’ll try and play mind games with each other. I’ll talk to my guy and make sure he keeps a level head and just plays football.”

Speaking to the media on Steelers.com after Friday’s practice, Brown was confident it wouldn’t be problematic.

“I’m a professional football player. I’m not a fighter. We wear equipment. My job is to go out there and score touchdowns and catch the football.”

That definitely won’t be an issue. Over the past two seasons, Brown has caught 265 passes for 3532 yards and 23 touchdowns. This season, without Martavis Bryant and Ladarius Green, Brown could set a career high in trips to the end zone.

Today, he’s third in franchise history and yards and fourth in catches, just a few grabs behind John Stallworth. With another elite year, he could even surpass him in yards, moving into second place behind Hines Ward.

Still, the man he’s likely to face most often Monday night, Norman, loves to talk trash as much as he does play football.

Norman, as we briefly mentioned in that Roethlisberger article, adopts the persona of a different movie character each week. From the Wall Street Journal’s original report last December.

“In a September game against New Orleans, he decided to reprise Brad Pitt’s portrayal of Achilles from the 2004 Trojan War movie ‘Troy.’ After snagging a key interception in Carolina’s 27-22 win, Norman could be heard repeating the character’s famous maxim: ‘There are no pacts between lions and men.’”

And wide receivers, even ones hyper-focused like Brown, have taken notice.

“Players he has faced say Norman is one of the more unpredictable defenders they have come across.”

Though Norman may be taking the approach to the extreme, defenders trying to get into Brown’s head is nothing new.

For cornerbacks, so far, no luck. Whether it’s players near the bottom of the rankings, Cleveland’s Jonathan Bademosi comes to mind, or at the top of their class, like Denver’s Chris Harris, Brown has shut up everyone.

If he can do the same to Norman, the Steelers will be in prime position to start the season out with a victory.