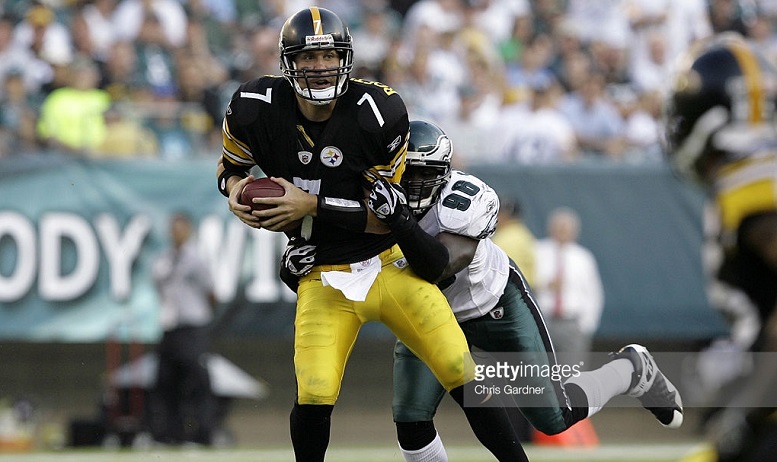 When the Pittsburgh Steelers play the Philadelphia Eagles Sunday at Lincoln Financial Field, they’ll be looking to accomplish something that they haven’t done since 1965 and that’s win a regular season game in the City of Brotherly Love.

In case you haven’t heard by now, the Steelers have lost their last 8 games to the Eagles in the city of Philadelphia and that span of time encompasses the entire Super Bowl era.

While Sunday won’t be his first regular season NFL game in Philadelphia against the Eagles, Steelers quarterback Ben Roethlisberger certainly won’t forget the one other time he played there when it counted as he was sacked a total of 8 times in a 2008 15-6 Pittsburgh loss.

“I’m not a big remembering game type-guy, especially losses, but that’s one that I do remember vividly,” Roethlisberger said Tuesday morning on 93.7 The Fan. “I remember getting sacked eight or nine times. I remember driving home from the airport after that game and thinking to myself, ‘Do I really want to keep doing this? Like, do I really want to keep playing football?'”

Luckily for us, Roethlisberger sat down and had a few beers with former Steelers defensive end Brett Keisel prior to going home from that game and after voicing his frustrations, decided to put the recent loss to the Eagles behind him and continue on with his career.

“We talked and got over it and whatnot but I remember that game vividly,” Roethlisberger recalled.

Not only was Roethlisberger sacked 8 times in that Week 3 game in 2008, which by the way included the Steelers entering the contest with a 2-0 record, he completed just 13 of 25 total pass attempts for 131 yards with an interception and two lost fumbles. If that weren’t enough, Roethlisberger scored two points for the Eagles in that game when he was flagged for intentional grounding in the end zone with 8 minutes’ left in the fourth quarter and the Steelers trailing by just 4 points.

Roethlisberger certainly shouldn’t feel so bad about his 2008 performance in Philadelphia as former Steelers quarterback Terry Bradshaw lost his one and only start in that city during his long career. In that 1979 17-14 loss to the Eagles at Veterans Stadium, Bradshaw completed just 12 of his 26 pass attempts in the game for 176 yards with one touchdown and 2 interceptions.

As previously mentioned, the Steelers last victory in the city of Philadelphia came in 1965 (Oct. 24). In that 20-14 win at Franklin Field, Steelers quarterback Bill Nelsen completed 6 of 16 pass attempts for 79 yards with one touchdown and one interception. The Steelers defense came to play that day as they scored two touchdowns on a fumble recovery and an interception. If you would like to read more about the Steelers last win in Philadelphia you can do so in this archived newspaper story that ran on October 25, 1965 in the Pittsburgh Post-Gazette.

On Sunday, Eagles rookie quarterback Carson Wentz will be in charge of trying to run the Steelers losing streak in Philadelphia to nine games. He enters the game having won his first two career starts.