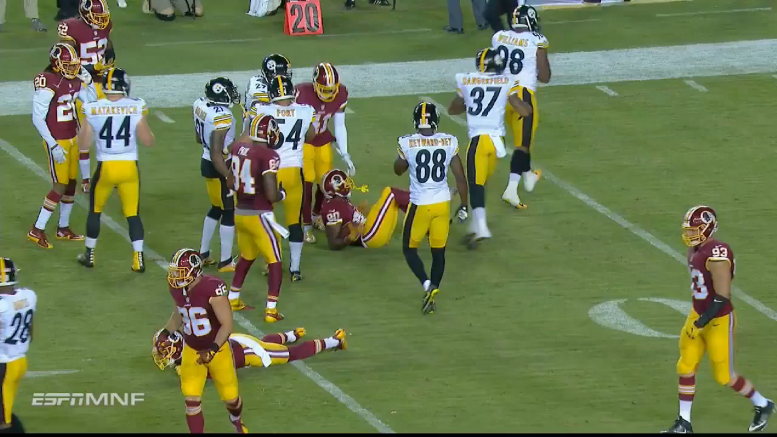 Here is something that you may not have noticed about the Pittsburgh Steelers’ roster this year, and about their game-day active list on Monday night against the Redskins: not only did three players from the 2015 practice squad make the team in 2016, all of them participated in the season opener.

There tends to be a variety of opinions about what the practice squad is really about. There are those who believe that it is the closest thing that the NFL has to a paid minor-league system, where they are able to have 10 players who are able to participate in the team-development portions of their journey, but not in games.

For those who take this view, they see the practice squad in large part as a developmental phase, where it should be anticipated that those who serve time there will improve over the span of a year or two and become roster-worthy participants.

In practice, however, the practice squad is really just as it is named, a squad of players who help the 53-man roster prepare for their upcoming opponents in practice, whether it is simply having a body to take reps against, or actively emulating a future opponent.

I’m not sure how the Steelers compare to other teams around the league, but they have had their fair share of success over the years in developing players from the practice squad, most notably players like Steve McLendon, Doug Legursky, and Isaac Redman. Oh, and James Harrison.

Of the current roster among players who are in at least their second season, Anthony Chickillo, Chris Hubbard, and, oh yeah, starting left tackle Alejandro Villanueva all spent all or a portion of their first season with the team on the practice squad.

This group of three players was joined by three more in 2016 when Jordan Dangerfield, B.J. Finney, and Xavier Grimble made the 53-man roster. Dangerfield and Grimble were on the practice squad for the entire 2015 season. Finney likely would have been as well had he not suffered an injury in the final preseason game. The Steelers paid him a roster-equivalent salary by the end of the year to make sure he stayed put.

Finney was used as a wedge man on the Steelers’ kick return unit, a unit that obviously proved to be obsolete at least for that night, with every kick producing a touchback. Dangerfield saw nine snaps, of which I believe the majority were on kick coverage units.

Grimble did not log time on special teams—though he did in the preseason—but he did see 16 snaps on the offensive side of the ball, of which I detailed earlier in the day. In fact, he was used more than I expected that they would, and I even wondered if the Steelers would use an extra tackle instead of the first-year tight end in a 13 personnel grouping.

If you’re wondering why players like Fitzgerald Toussaint and L.J. Fort, both of whom spent the majority of the 2015 season on the practice squad, were left off the list, the reasons are two-fold. They both finished the year on the 53-man roster, and, more importantly, they both had accrued seasons with other teams

The focus here is on players who made the graduation from practice squad player to 53-man roster, this season, in Pittsburgh, for the first time. These are the players you could argue that the Steelers ‘developed’.

So this is for those of you who view the practice squad as a developmental tool. You’ve got three more players who graduated this season—although some of their roster spots may prove to be temporary.