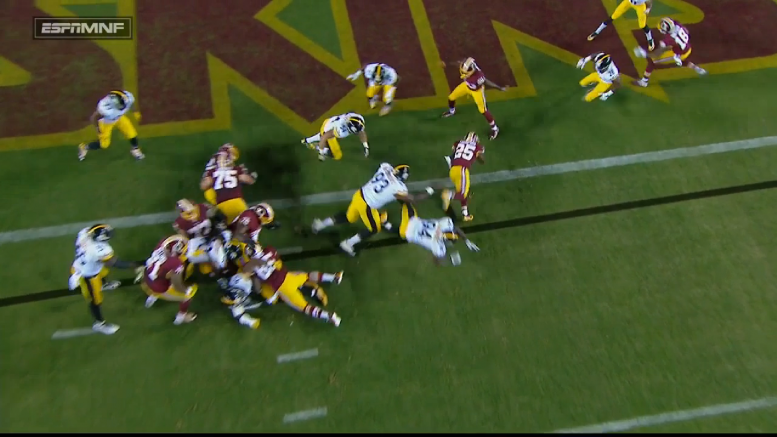 Question: What, if anything, should we take away from the Steelers’ run defense in the season opener?

The Steelers’ season opener against the Redskins should serve as a good example of why mere cumulative yardage is a poor, or at the very least, a very incomplete barometer for measuring the success or failure of an offensive or defensive unit.

The Steelers defense, for example, only gave up 55 rushing yards against Washington, which is impressive taken in isolation, but the Redskins gained that yardage on just 12 rushing plays, averaging 4.6 yards per rush—which is far from impressive, and, in fact, pretty bad.

Matt Jones picked up just 24 yards on his seven carries, but Chris Thompson added 23 yards on only four, with one being a one-yard touchdown, and an eight-yard Kirk Cousins scramble added to the total. Even if you factor out the quarterback scramble, the Redskins still gained 47 rushing yards on 11 carries, which is over 4.2, nearly 4.3 yards per carry.

What is interesting to note is that the defense only gave up one play of double-digit yardage, a 12-yard run, and they recorded two run-stops for negative yardage, but they also gave up a rushing touchdown. They only surrendered a handful of those last season.

Once we go through the charting, we will have a better picture of the situation, with respect to what sort of packages the runs came against. Understandably, many of them are likely to have come out of the nickel, since that is what the Steelers primarily run, and the Redskins ran over 40 passing plays.

One thing that is for certain is that missed tackles played their role. Sean Davis missed a tackle on Jones in the backfield on his 12-yard run, and if you take out just that one play, then the Redskins’ average dips under four.

The season opener offered a fairly small sample size from which to judge the Steelers’ run defense, which would understandably be a work in progress at this point of the season anyway. Still, it bears monitoring in the games going forward.