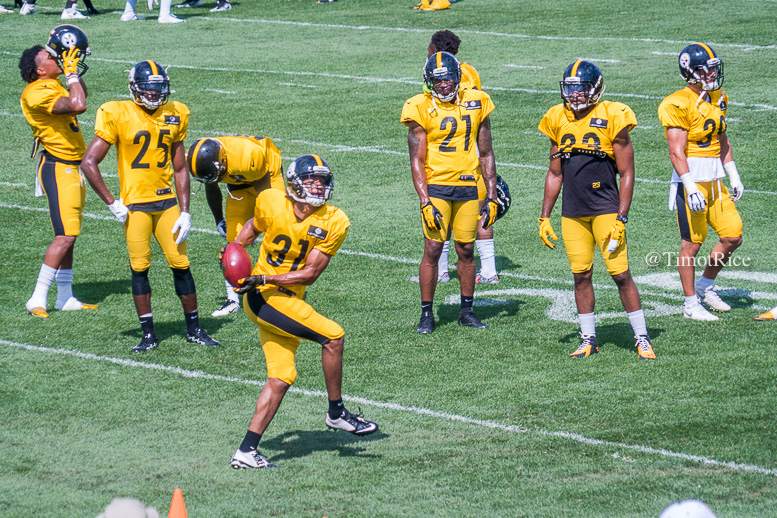 To finish things up, we’re breaking down my thoughts on the Pittsburgh Steelers’ secondary after the first 11 practices.

William Gay: His snaps have been limited in camp in an effort to rest him and get a look at the youth behind him. But like so many of the veterans, there isn’t much we needed to learn about the veteran. He has played only on the outside and appears that he will only play in the slot if he absolutely has to.

Ross Cockrell: The numbers and the blurbs aren’t sparkling but Cockrell has had the tough task of trying to lock down Antonio Brown and Sammie Coates, especially with Gay limited. It’s been tough, as you’d might expect. He did make a couple plays in the joint practices against the Detroit Lions and that’s some positive news.

Artie Burns: I think Burns has been talked about enough. A difficult start to camp but the road to the NFL is paved with adversity, not immediate success. Not to mention when your first NFL tests come against the best receiver in the league. Some stiffness he showed in college has made it tough on him covering quick-twitch players underneath.

One positive I have seen from him is a sense of physicality and ability to support the run. That’s still high on the list of priorities for a Steelers’ cornerback.

Sean Davis: We’re going to include Davis with the cornerbacks because that’s the spot he seems most likely to see action at the nickel spot. It’s better for him to play inside than out. More similar to safety and he does have the help of knowing he’ll be playing this spot from the onset instead of a last-moment switch. Comfort, if such a thing can exist for a rookie.

He’ll have to learn to play with a little more finesse against quick-twitch slot receivers. He has the feet to do so but it’s a whole new world to play with proper technique and mirror releases that can go either way. No sideline help like playing on the outside.

Doran Grant: I wrote last week that Grant has gotten better after being picked on early in camp. And that’s what you look for in a young guy. But it’s been a relatively quiet camp and Gerry Dulac recently reported he may be making the switch to safety, Etch-a-Sketching most everything we’ve known about him. Watch for that beginning Sunday.

Montell Garner: After making a little bit of noise in the spring, he’s carried it over into camp. Garner has an aggressive mentality going after the ball and he’s someone who could wind up with an interception or two in the preseason. But he will gamble and give up separation at the top of his route, looking back and getting out of phase with the receiver.

He’s also the only cornerback to play all three cornerback spots – left, right, and slot. That versatility doesn’t make him a slam-dunk candidate to make the team but obviously, the more you can do, the better chance you’ll have. Garner has flashed physicality and an ability to support the run. He has one of the hardest hits of camp, smacking Daryl Richardson several practices ago.

Donald Washington: Gotta say, like a parent grounding their kid, I’m not mad. Just a little disappointed. I pegged him as a training camp sleeper, an athletic and NFL background, but he’s barely made an impact with the team. His biggest highlight is getting truck-sticked by Fitzgerald Toussaint on Friday Night, an overall bad day for him in every facet.

Maybe he’ll look better in a stadium when he’s able to call upon NFL experience most others don’t have. Here’s to hoping.

Al-Hajj Shabazz: I basically discounted him from having a shot to stick with this team after the first days of camp. But starting with that Friday Night practice, Shabazz has picked it up. He’s a bigger body who uses his length to play the pocket and has come out looking as one of the best cornerbacks in one-on-ones. With Pittsburgh gravitating towards taller, longer cornerbacks, Shabazz provides intrigue as a practice squad option.

His straight line speed is questionable and he has shown issues with understanding where routes break, getting caught on double-moves.

Kevin White: White was added following Senquez Golson’s injury. He began his time outside but moved to the slot. Don’t have much information on him but he hasn’t look demonstrably bad out there. He could see late-game snaps in the slot and will have to excel on special teams, probably as a gunner and kick coverage.

Mike Mitchell: Mitchell has been in and out of team drills, probably just precautionary, and I haven’t learned a lot about him. Not that we need to know much. Just keep that shoulder intact.

Robert Golden: Golden continues to show he’s an ideal alley defender and incredibly reliable tackler. I haven’t gotten a good feel for his coverage skills but it’s not often safeties get tested deep in practice. Any deep throws usually come against single high looks and on the sideline. Golden’s been fine, though, and seems locked in as the starting strong safety.

Shamarko Thomas: Thomas is having a Thomas-like camp. Monster hitter and a guy I bet running backs absolutely dread. Mike Tomlin did get after him once for not using his hands well enough as a blitzer and if he has a role on defense this year, it’s probably as that dime defender who will be brought quite a bit.

Haven’t gotten a feel for him in coverage, if there’s any progression there, but like I said, it’s difficult to judge. He needs to play clean, smart football in the preseason.

Jordan Dangerfield: Dangerfield is similar to Thomas. Huge hitter, lots of energy, and definitely makes his presence known on the practice field. Doesn’t matter if contact is permitted or not, he’s hitting you. Again, coverage is hard to discern, which makes this preseason games super exciting, though he had one nice breakup on Eli Rogers early in camp.

Ross Ventrone: No one is expecting him to find a role on this defense, and making the 53 still feels only slightly better than 50/50, but he did surprisingly get some work in the slot immediately following Golson’s injury. So that’s some new information. But other than that, he’s the same ‘ol Ventrone.

Jacob Hagen: His snaps have been pretty limited. He works hard, puts in extra work, but hasn’t made the impact I thought he could, nor has he really had the chances as the last safety in. I’m hoping the preseason games allow him to show off some of the ball skills we’ve been told he has.

Ray Vinopal: A local kid out of Pitt, Vinopal has quick feet but that’s about all I’ve learned from him. He runs with Hagen in the same safety group, rarely getting playtime. It’ll be a tough time for him to make it past the 75 man cutdowns.