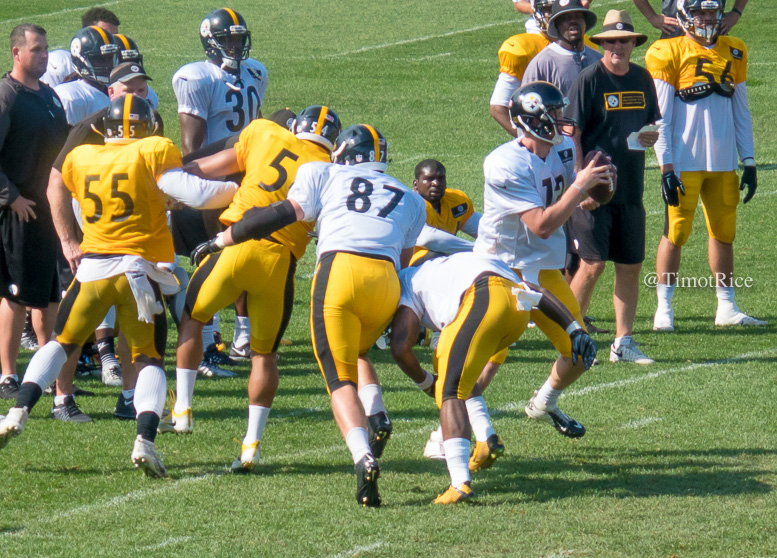 While the Pittsburgh Steelers are only seven practices into their 2016 training camp, it’s starting to sound more and more like backup quarterback Dustin Vaughan has a legitimate shot at making the team’s final 53-man roster this year.

With it currently sounding like Landry Jones has a great chance at beating out Bruce Gradkowski for the right to back-up starter Ben Roethlisberger this season, you have to wonder if the team might be seriously considering cutting the veteran with hopes they can keep him on speed dial this season in case of emergency and thus keep Vaughan to serve as their No. 3 quarterback.

During a recent interview that was aired Friday night on SiriusXM NFL Radio, Steelers head coach Mike Tomlin was asked about Vaughan and particularly about his arm strength.

“Yeah, Dusty’s got a little whip, doesn’t he and that’s attractive, and that’s a great place to begin,” said Tomlin of Vaughan. “Obviously, we’ll gain more knowledge about him as we put him in situations, you know, two-minute and third down. Hadn’t had a lot of exposure, knows the areas. Sometimes it’s easy to look pretty good on 1st and 10 and 2nd and medium at that position, but really like some of the things that he’s showing in the traits that he’s bringing.”

Vaughan, who signed a futures contract with the Steelers this past January, figures to get a long look during the team’s first two preseason games. When and if that exposure happens, one would think that the bright lights of the stadiums won’t overwhelm him as he’s already appeared in 8 preseason games with the Dallas Cowboys over the course of the last two years after originally being signed by them in 2014 as an undrafted free agent out of West Texas A&M. However, during those 8 games, the 6-5 quarterback completed just 57 of his 110 total passes for 555 yards with one touchdown and two interceptions. He was also sacked a total of 14 times in those contests.

Vaughan actually spent his entire rookie season on the Cowboys 53-man roster but failed to make their team last year out of training camp. After being waived by the Cowboys just prior to the start of the 2015 regular season, Vaughan ultimately landed on the practice squad of the Buffalo Bills in late September. That stay, however, didn’t last a full month as he was ultimately released in October and remained unemployed the remainder of the season.

In order to make the Steelers final 53-man roster this year, Vaughan will obviously need to play well during the upcoming preseason and decidedly better than Gradkowski as the veteran only has a cap charge of $680,000 in 2016 due to him signing a one-year contract for the veteran minimum during the offseason that included just an $80,000 signing bonus. Gradkowski is also considered a good sounding board on the sideline due to his experience in the league and has a great presence in the locker room to boot.

Regardless of whether or not Vaughan ultimately beats out Gradkowski, it should be fun to see him whip the football around during the team’s first few preseason games.